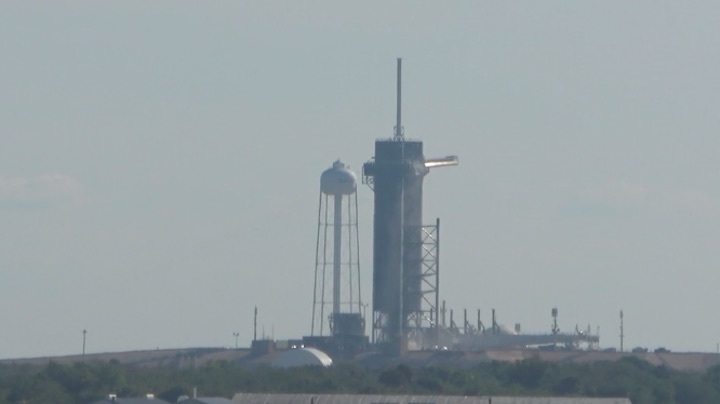 SpaceX tested astronaut slidewire escape baskets and fire suppression capabilities Friday at launch pad 39A in Florida, demonstrating rescue systems that would be activated in the event of an emergency before liftoff of a crewed mission.

This video shows emergency escape baskets sliding down a cable on the west side of pad 39A. The baskets could be used by astronauts and ground teams to quickly get away from dangerous conditions on the launch pad in case of a pre-launch accident with the Falcon 9 rocket and Crew Dragon spacecraft.

The baskets are modified from the space shuttle program. Each can carry three people, and they would whisk launch pad personnel to an armored vehicle called an MRAP parked on the western perimeter of the pad. Ground teams and astronauts could then drive the MRAP to safety.

The escape plan is similar to the one employed during the space shuttle program, but the baskets have been modified and placed at the 265-foot-level on the tower at pad 39A, 70 feet higher than their location during the shuttle era.

SpaceX’s closeout crew — the team that helps astronauts board the Crew Dragon capsule — numbers around eight to 10 people. The Dragon will carry up to four astronauts into space on each mission, but the first piloted test flight — designated Demo-2 — will have just a two-man crew.

The crew will strap in to the Dragon capsule before SpaceX begins fueling the Falcon 9 rocket. SpaceX does not start filling the launcher with kerosene and liquid oxygen propellants until 35 minutes before liftoff, a procedure known as “load and go.”

The ground team will fall back to a safe location away from the pad before fueling of the rocket begins. In the event of an emergency after fueling, the Crew Dragon’s escape engines could quickly propel the capsule and crew away from the rocket to a parachute-assisted landing just offshore in the Atlantic Ocean. 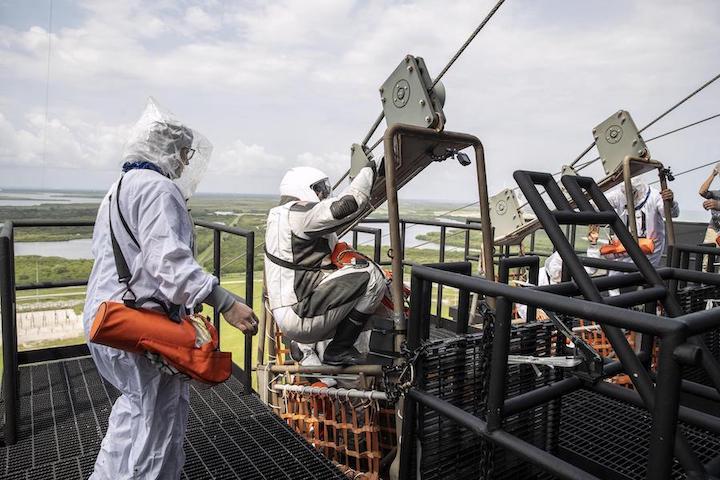 If they used the escape baskets, NASA says the Dragon crew can unstrap and exit the spaceship in less than 90 seconds. Add in the time required to run to the other side of the launch pad tower and ride the baskets to the ground, and the entire escape procedure for the flight crew would take around three-and-a-half minutes, from the time they begin egressing from the capsule until they are inside the armored vehicle.

An escape using the Crew Dragon’s SuperDraco engines would take less than a second, according to SpaceX. However, for safety reasons, the capsule escape engines are not activated until just before the start of fueling in the final countdown.

NASA says the Crew Dragon’s first piloted mission — with astronauts Doug Hurley and Bob Behnken on-board — could launch as soon as mid-to-late May from pad 39A. The astronauts will fly to the space station for an expedition that could last several weeks up to several months, then return to Earth for a parachute-assisted splashdown in the Atlantic Ocean just off Florida’s East Coast.

Assuming the Demo-2 mission is successful, the first operational Crew Dragon flight to the station is scheduled to launch later this year with a four-person crew.

NASA has contracted with SpaceX and Boeing to build new human-rated U.S. crew vehicles to end reliance on Russian Soyuz spacecraft, which have provided the only means of ferrying astronauts to and from the space station since the retirement of the space shuttle in 2011.