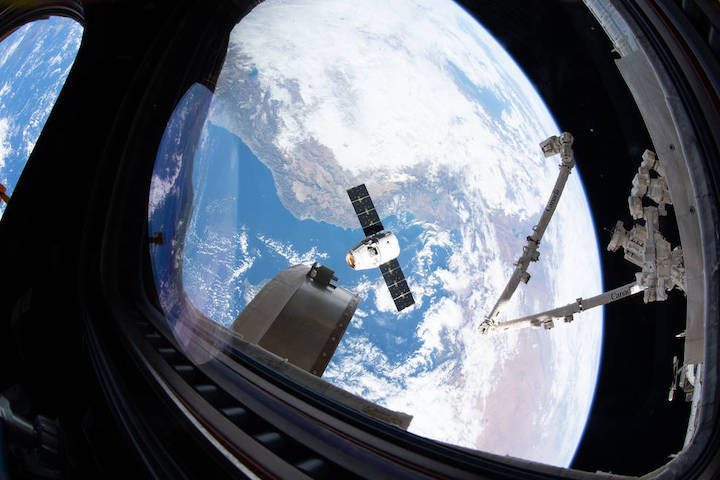 SpaceX's Dragon resupply ship slowly approaches the orbiting lab as both spacecraft were orbiting 258 miles above the Mediterranean Sea Dec. 9, 2019. Filled with more than 4,000 pounds of valuable scientific experiments and other cargo, Dragon is now set to leave the International Space Station Monday, April 6.
Credits: NASA

Filled with more than 4,000 pounds of valuable scientific experiments and other cargo, a SpaceX Dragon resupply spacecraft is set to leave the International Space Station Monday, April 6. NASA Television and the agency’s websitewill broadcast its departure live beginning at 9:30 a.m. EDT.

Robotic flight controllers at mission control in Houston will issue commands at 9:52 a.m. to release Dragon using the station’s Canadarm2 robotic arm. Expedition 62 Flight Engineer Andrew Morgan of NASA will back up the ground controllers and monitor Dragon’s systems as it departs the orbital laboratory.

Dragon will fire its thrusters to move a safe distance from the station, then execute a deorbit burn as it heads for a parachute-assisted splashdown around 3:40 p.m. in the Pacific Ocean, southwest of Long Beach, California. The splashdown will not air on NASA TV.

Planning ways to supply food for a multi-year mission on the Moon or Mars may require making food and nutrients in space. BioNutrients demonstrates a technology that enables on-demand production of nutrients needed during long-duration space missions. Although designed for space, this system also could help provide nutrition for people in remote areas of our planet.

Toward printing human organs in space

Biological printing of the tiny, complex structures found inside human organs, such as capillaries, is difficult in Earth’s gravity. The BioFabrication Facility (BFF) attempts to take the first steps toward the printing of human organs and tissues in microgravity. The facility may also help maintain the health of crews on deep space exploration missions by producing food and personalized pharmaceuticals on demand.

The Engineered Heart Tissues (EHTs) study looks at how human heart tissue functions in space. It uses unique 3D tissues made from heart cells derived from human induced Pluripotent Stem Cells (hiPSCs), essentially adult stem cells. Researchers expect significant differences in function, structure and gene expression between EHTs in microgravity and those on the ground. Understanding these differences could help them find ways to prevent or mitigate problematic changes on future long-duration missions.

Samples from the Space Biofilms investigation, which examines microbial species and their formation of biofilms, are returning on Dragon. Biofilms are collections of one or more types of microorganisms – including bacteria, fungi and protists – that grow on wet surfaces. Better control of biofilms may help maintain crewed spacecraft and protect the health and safety of crew members as well as help prevent the introduction of Earth-based microbes to planetary bodies on which humans land.

These are just a few of the hundreds of investigations providing opportunities for U.S. government agencies, private industry and academic and research institutions to conduct microgravity research that leads to new technologies, medical treatments and products that improve life on Earth. Conducting science aboard the orbiting laboratory will help us learn how to keep astronauts healthy during long-duration space travel and demonstrate technologies for future human and robotic exploration beyond low-Earth orbit to the Moon and Mars.

For almost 20 years, humans have lived and worked continuously aboard the International Space Station, advancing scientific knowledge and demonstrating new technologies, making research breakthroughs not possible on Earth that will enable long-duration human and robotic exploration into deep space. As a global endeavor, 239 people from 19 countries have visited the unique microgravity laboratory that has hosted more than 2,800 research investigations from researchers in 108 countries.