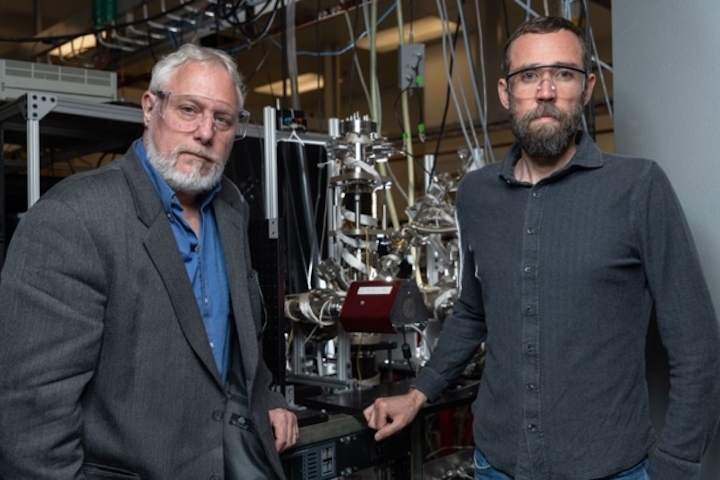 Some of the ice on Mercury is created by chemical reactions triggered by the planet’s extreme daytime heat according to Brant Jones and Thomas Orlando at the Georgia Institute of Technology and NASA’s Menelaos Sarantos.  The trio discovered the process by modelling the chemistry that unfolds as the solar wind impacts the planet’s surface. Their discovery could explain the presence of up to 10% of Mercury’s total water ice, and also provide new insights into how water could be created on the Moon.

Despite its daytime temperatures reaching as high as 400 °C, Mercury is known to host vast quantities of frozen water in the deep, permanently shadowed craters close to its poles. First discovered by Earth-based radar systems, this ice has now been precisely mapped by NASA’s MESSENGER spacecraft, which has been in orbit around Mercury since 2011. Astronomers believe that most of this water was delivered by impacting asteroids and comets. They also think the ice has remained trapped for millions of years in shady areas where temperatures remain permanently below -200 °C.

In this latest study, Jones, Orlando and Sarantos describe how protons in the solar wind may also be creating water on the planet. The trio developed a model that suggests that the protons can penetrate to depths of up to 15 nm into Mercury’s surface soil. There, the protons react with metal oxides to form hydroxyl (OH) groups. In Mercury’s extreme daytime heat, these groups can react with each other to form gaseous water, along with molecular hydrogen.

The trio then simulated how water behaves in Mercury’s exosphere – the planet retains no atmosphere but is surrounded by an exosphere of atoms and molecules kicked up from the surface. Water in the exosphere is transported across the planet through a variety of mechanisms. Some of these molecules rise far above the surface, while others are split into fragments.

However, the simulation revealed that some water does become trapped in the chilly polar craters, which occupy around 1% of Mercury’s total surface area. The trio predict that this process could account for around 10% of Mercury’s frozen water.

The result could shed new light on the differences between the ice-forming mechanisms found on Mercury, and those of other airless bodies like the Moon. The Moon has far cooler temperatures than Mercury, so the solar wind is far less likely to produce hydroxyl groups. This would explain why water ice does not appear to be nearly as abundant in the Moon’s craters as in Mercury’s. Instead, the trio hopes that their findings could lead to the development of new techniques for fabricating water on the Moon – which could be crucial for future space missions.

The research is described in The Astrophysical Journal Letters.