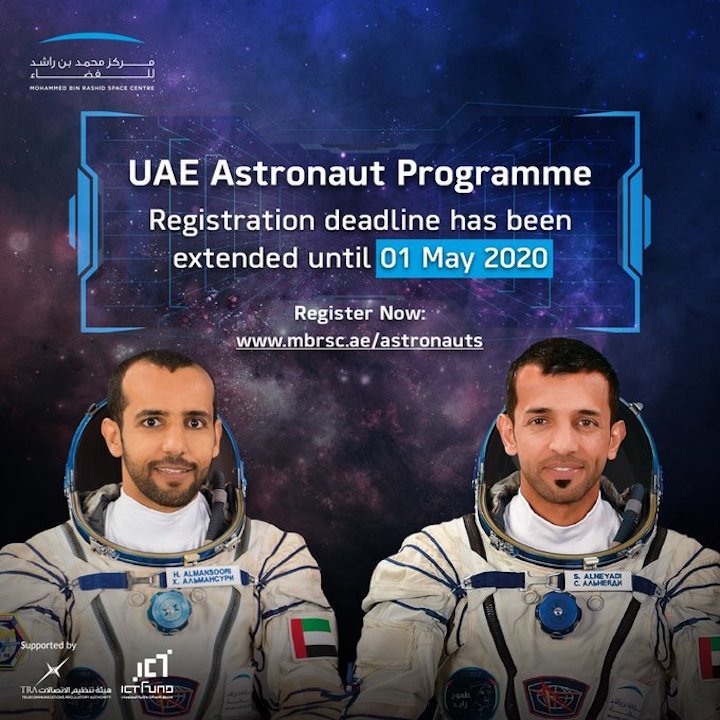 The registration deadline for the second edition of the UAE Astronaut Programme has been extended to May 1, the Mohammed bin Rashid Space Centre (MBRSC) has announced.

MBRSC confirmed that it has received a large number of applications so far, and by extending the deadline, many more Emiratis are expected to apply, official news agency WAM reported.

In a press meet on March 3, officials had confirmed that more than 3,000 aspirants had applied for the next edition of the programme. Professionals working in the engineering field had made up 31 per cent of the applicant pool, while 17 per cent of them were pilots.

Registrations were originally expected to close on March 31.

The second edition of the UAE Astronaut Programme gained ground when the UAE’s Vice President and Prime Minister and Ruler of Dubai, Sheikh Mohammed bin Rashid Al Maktoum, had announced the opening of registrations on December 6, 2019.

After reviewing all the submissions, a committee consisting of ten specialists, including astronauts Hazzaa Al Mansoori and Sultan Al Neyadi, will shortlist the applicants based on interviews and evaluations. Shortlisted candidates will be then undergo a selection process.

Yousuf Hamad Al Shaibani, MBRSC director-general, said, “The UAE Astronaut Programme is an extension of the vision of the country’s leadership to develop a knowledge-based economy. Our capabilities in the space sector are growing rapidly, and the next two Emirati astronauts will add immense impetus to our ambition for crewed space exploration.

“This type of progression is key to the sustainability of the programme as it enables us to achieve and learn more from every mission. Considering the tremendous response that we have received from Emiratis from different quarters, we are extending the deadline for registrations, and looking forward to zeroing down on the next batch of Emirati space goers.”

All applicants must be UAE nationals aged above 18 and must hold a minimum of a bachelor’s degree. Professionals from all fields will be considered, including engineers, pilots, military personnel, teachers, those involved in STEM and other careers.

Aspirants keen to apply must visit the MBRSC website.