If three or more objects move around each other, history cannot be reversed. That is the conclusion of an international team of researchers based on computer simulations of three black holes orbiting each other. The researchers, led by the Dutch astronomer Tjarda Boekholt, publish their findings in the April issue of the journal The Monthly Notices of the Royal Astronomical Society. 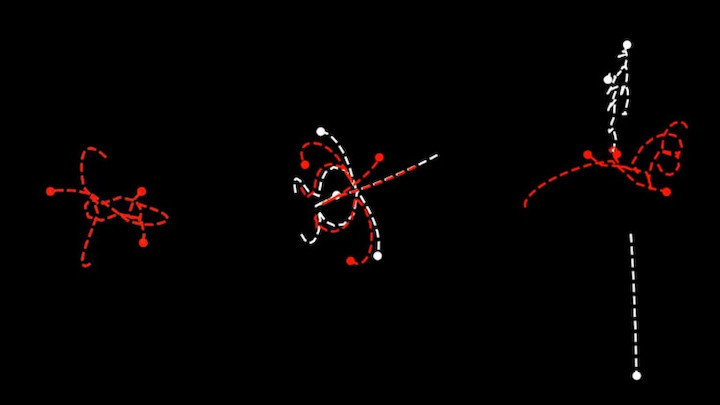 Two computer simulations of three black holes that influence each other. The red line is the simulation in which the computer goes back in time. The white line is the simulation where the computer moves forward in time. After 35 million years (situation on the left), there is still no deviation. The red line completely covers the white line. After 37 million years (middle), the orbits deviate slightly and the white line becomes visible. The time symmetry is broken because disturbances the size of the Planck length have an exponential effect. After 40 million years (right), the deviation is obvious. (c) Astronomie.nl/Tjarda Boekholt

Most basic laws in physics have no problem with the direction in which they run. They are, as scientists call it, symmetric with respect to time, or time symmetric. In practice, however, everyone knows that time cannot simply be turned back. For example, a cup that falls into hundred pieces really does not fly back into your hand spontaneously and undamaged. Until now, scientists explained the lack of time symmetry by the statistical interaction between large numbers of particles. Three astronomers now show that only three particles are enough to break the time symmetry.

Tjarda Boekholt (University of Coimbra, Portugal), Simon Portegies Zwart (Leiden University) and Mauri Valtonen (University of Turku, Finland) calculated the orbits of three black holes that influence each other. This is done in two simulations. In the first simulation, the black holes start from rest. Then they move towards each other and past each other in complicated orbits. Finally one black hole leaves the company of the two others. The second simulation starts with the end situation of two black holes and the escaped third black hole and tries to turn back the time to the initial situation.

It turns out that time cannot be reversed in 5% of the calculations. Even if the computer uses more than a hundred decimal places. The last 5% is therefore not a question of better computers or smarter calculation methods, as previously thought.

Planck length
The researchers explain the irreversibility using the concept of Planck length. This is a principle known in physics that applies to phenomena at the atomic level and smaller. Lead researcher Boekholt: "The movement of the three black holes can be so enormously chaotic that something as small as the Planck length will influence the movements. The disturbances the size of the Planck length have an exponential effect and break the time symmetry."

Co-author Portegies Zwart adds: "So not being able to turn back time is no longer just a statistical argument. It is already hidden in the basic laws of nature. Not a single system of three moving objects, big or small, planets or black holes, can escape the direction of time."