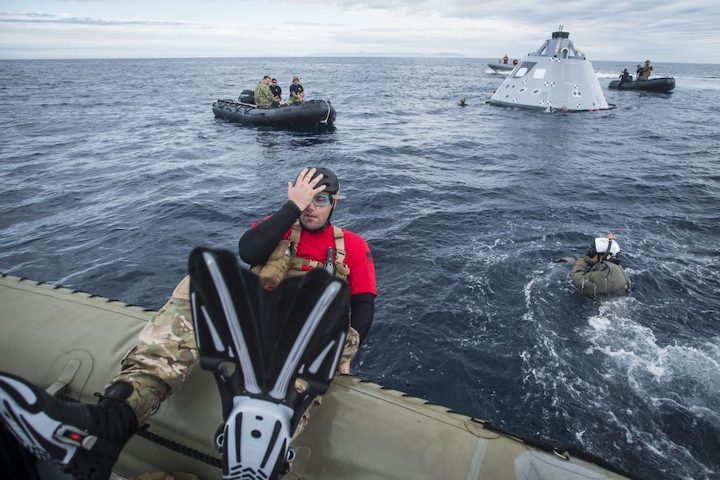 In 2018, a group of military personnel on Florida’s Space Coast received an alarming phone call. The International Space Station was leaking air after apparently being struck by a micrometeorite, and its astronauts needed to come home. Now.

It was up to the search-and-rescue specialists of the 45th Operations Group’s Detachment 3 to make sure they returned safely.

“We were all sitting around the office on a Friday afternoon … and we got a call from NASA,” Maj. Chris Hearne, the detachment’s mission support division chief, said in a recent interview. “’Can you guys prepare for the astronauts to abandon and come back in the Soyuz all over the planet?’”

They tried to deploy the readiest forces they could on short notice.

“We’re starting to call—who has what rescue assets available, because obviously our equipment wasn’t ready at that time,” said Hearne, an HH-60 pilot.

The situation proved less dire than originally thought: the problem stemmed from a mysterious hole in the Soyuz spacecraft docked to the ISS, which the astronauts patched and continued on unharmed. “For about 30 minutes, it was kind of crazy,” Hearne said.

As the U.S. returns to manned space launch, Detachment 3 is training to rescue a new generation of astronauts. But the niche organization is small and can feel misunderstood in the vast Pentagon bureaucracy, even as it takes on new importance in the modern space age.

The detachment has occupied a unique and sometimes awkward place in the military since it was created to support Project Mercury in 1959. It went on to assist Project Gemini in the 1960s and switched names over the years to reflect new eras in spaceflight. In the near future, humans will reach the cosmos through three efforts: the longstanding Russian Soyuz program, which routinely takes American astronauts to and from the ISS; the Commercial Crew Program (CCP), under which SpaceX and Boeing are developing ways to provide commercial transportation to low Earth orbit and the ISS as soon as this year; and NASA’s Artemis program to return Americans to the Moon by 2024.

Detachment 3 provides aeromedical evacuation in Kazakhstan if American astronauts are injured upon a Soyuz capsule landing. For CCP, the detachment offers worldwide emergency rescue when needed during launch and landing operations. For Artemis, the detachment is responsible for recovery and rescue in any situation.

At the time of the first U.S. space shuttle launch, the staff had hundreds of members and was overseen by a three-star general. It now spans just 10 Active-duty Department of the Air Force personnel, one Active-duty Navy member, six civilians, and 11 contractors. They can remain in the detachment for up to four years.

Two months out from a launch or landing, commands across the Pentagon tap other forces like HH-60s, HC-130s, C-17s, and 26-person Guardian Angel rescue teams to support the detachment. The organization also includes a bioastronautic medical expert who teaches rescue forces how to handle astronauts deconditioning from the effects of outer space.

About a month out, pararescuemen and combat rescue officers start training to open the return capsule, extract an astronaut, and take them out of their spacesuit. About a week out, rescue boats, jet skis, medical tools, and scuba gear made to handle hazardous materials are loaded onto two C-17s, which show up alongside two HH-60s and two HC-130s. For CCP and Artemis missions, troops will move their equipment to its alert locations; for Soyuz missions abroad, troops prepare in and move out from Germany.

Four hours before a domestic return, an operations center at Patrick Air Force Base, Fla., that ties into NASA would be fully manned by several Space Force, Navy, and Coast Guard employees while rescue forces sit on alert. A second Guardian Angel team waits with a C-17 at Charleston Air Force Base, S.C., in case the capsule is farther flung from the East Coast, and a third team with a C-17 sits at Joint Base Pearl Harbor-Hickam, Hawaii, in the west. Then the nearest team would go in, if and when needed.

For launches, the operations center and forces at Charleston and Hickam must remain on alert for as long as several days to ensure the astronauts have safely docked in space.

“All [return systems] have some way for the capsule to separate itself from the rocket if something goes wrong, whether it’s on the pad or in flight, and if that happened, it would be the rescue assets here at Patrick Air Force Base … that would do the rescue,” Hearne said of launches. “Then as we get higher and you get further away, the mission would fall to either the C-17 and Guardian Angel crews at Charleston or Hickam. Once orbital insertion happens, and main engine cutoff, the rescue forces at Patrick stand down.”

Since NASA’s space shuttle program saw its last flight in July 2011, the detachment has been preparing for the U.S. once again to send people into orbit from the mainland. They have held exercises to make sure the C-17s can take off with an hour’s notice, and in conjunction with Boeing and SpaceX to work through data-sharing and command processes. A final practice run to recover Artemis’s Orion capsule with the Navy took place this month.

As manned spaceflight ramps up, the detachment could need two or three times more staff to work with NASA, private companies, and other parts of the military, said Maj. Joe Waechter, the organization’s commercial crew division chief.

That’s where a larger question continues to pop up: where do these people belong?

Six decades after the Eisenhower administration created the organization, its members are still trying to remind the Joint Staff and other pilots that they exist. One of the detachment’s biggest challenges is educating those who don’t understand its mission, causing friction when the group needs resources, Hearne said.

The detachment answers to U.S. Space Command at the moment. But its mission of terrestrial rescue of NASA assets, with $1.4 million of specialty equipment funded by NASA, doesn’t quite fit in the Air Force. It doesn’t quite fit in NASA or the Space Force, even as Patrick transitions to the new service. It’s not truly part of the Navy, either.

Air Mobility Command could take on the mission as it grows, said Waechter, a C-17 pilot. AMC can also benefit from new technology the detachment is using so its onboard radios can find survival radio signals, turning the C-17 airlifters into rescue assets.

Hearne suggested the detachment could belong to U.S. Special Operations Command because of its unique nature: “I don’t see a strong argument for us staying in U.S. Space Force, unless you were either to change our responsibilities or drastically change something about Space Force.”

“The reviews are happening right now on where’s the right place for us, and what does the unit need to really look like?” he said. “We’re hoping the odds are in our favor.”

The Airmen are also working through the growing pains of going back to sister units to continue flying so that the Air Force doesn’t have to spend hundreds of thousands of dollars to requalify them as pilots. Hearne started as the first test case about a year ago; Waechter started flying in late 2019.

“If this continues to be a long-term thing, the billets could be changed to be flying positions,” Hearne said. “We’re trying this out as a new program to see if it does everything we think it’s going to do: saves the Air Force money, keeps us plugged into the communities, supports those other units with extra instructors.”

Despite the relative anonymity and the disconnect from a normal flight schedule, working for the detachment has its perks. Astronauts sometimes pop in to see the equipment and get a feel for the recovery process. Occasionally, training entails throwing jet skis out of an airplane into the ocean 1,000 feet below while flying 200 mph.

Soon, they’ll get to put that into practice.

“We’re going to continue to [refine tactics, techniques, and procedures] as we support [the] Commercial Crew Program and we refine rescue and we refine teaching just-in-time training. That’s going to flow over to Artemis and make us that much more prepared for that,” Hearne said. “Having the discussions about where we belong in the Department of Defense, looking at increasing our manning, these are all the correct steps that need to be happening. The key is to not let any of them fall by the wayside.”

Raumfahrt - These Airmen Train to Rescue Astronauts. But Do They Belong in the Space Force?
622 Views
Created with page4