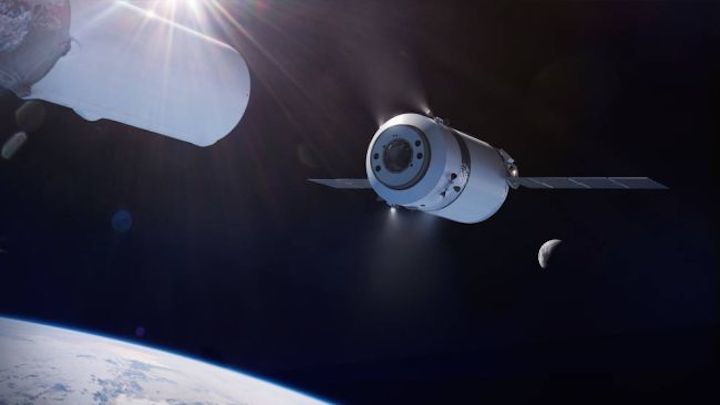 Artist's illustration of the SpaceX Dragon XL as it is deployed from the Falcon Heavy's second stage in high Earth orbit on its way to the Gateway in lunar orbit.
(Image: © SpaceX)

SpaceX cargo craft will soon reach much farther out into the final frontier, if all goes according to plan.

The California-based company already flies cargo missions to and from the International Space Station (ISS) for NASA. Now, SpaceX has scored a contract to supply Gateway, the moon-orbiting space station that the agency aims to start building in 2022, agency officials announced Friday (March 27).

Gateway is a key part of NASA's Artemis exploration program, which seeks to establish a sustainable, long-term human presence on and around the moon by the late 2020s. The small space station will serve as a jumping-off point for sorties, both crewed and uncrewed, to the lunar surface.

SpaceX will help to keep the Gateway supplied, delivering scientific experiments and a variety of other gear to the outpost, NASA officials said. The company is guaranteed two missions under its newly announced Gateway Logistics Services contract.

SpaceX's robotic ISS resupply runs employ the company's Falcon 9 rocket and Dragon capsule, which can loft 13,200 lbs. (6,000 kilograms, or 6 metric tons) to low-Earth orbit. But SpaceX's Gateway missions will use different hardware: the huge Falcon Heavy rocket and a special capsule variant called Dragon XL. (SpaceX has also developed another Dragon version, Crew Dragon, which will fly astronauts to and from the ISS under yet another NASA contract.)

Dragon XL will be able to carry more than 5 metric tons of cargo to the Gateway, SpaceX representatives said via Twitter Friday.

"Through our partnership with NASA, SpaceX has been delivering scientific research and critical supplies to the International Space Station since 2012, and we are honored to continue the work beyond Earth’s orbit and carry Artemis cargo to Gateway," she added.

Dragon cargo missions to the ISS typically last about a month from launch to splashdown. But Dragon XL will likely stay attached to the Gateway for six to 12 months at a time, NASA officials said.

Other companies may end up joining SpaceX in the Gateway resupply game.

"The Gateway Logistics Services contract enables NASA to order missions for as long as 12 years with a 15-year performance period and provides the ability to add new competitive providers," NASA officials wrote in the same statement, adding that the total value of these deals will be capped at $7 billion.

"These missions will support NASA’s plans for sustainable exploration with both international and commercial partners, while developing the experience and capabilities necessary to send humans to Mars," the officials added.

Indeed, collaboration with commercial companies is a key part of NASA's lunar exploration goals. For example, the agency will rely on privately built landers to ferry both scientific experiments and astronauts to the lunar surface from Gateway. (The first crewed missions may not stop over at Gateway, however. NASA has apparently taken Gateway off the "critical path" for its planned 2024 crewed lunar landing, though agency officials have said they remain committed to the space station over the long term.)

SpaceX is in the running to provide NASA landing services as well. In November 2019, NASA announced that the company is eligible to bid on the delivery of robotic agency payloads to the lunar surface. SpaceX would use its Starship deep-space transportation system, which the company is developing primarily with the purpose of helping to settle Mars, to do this work.