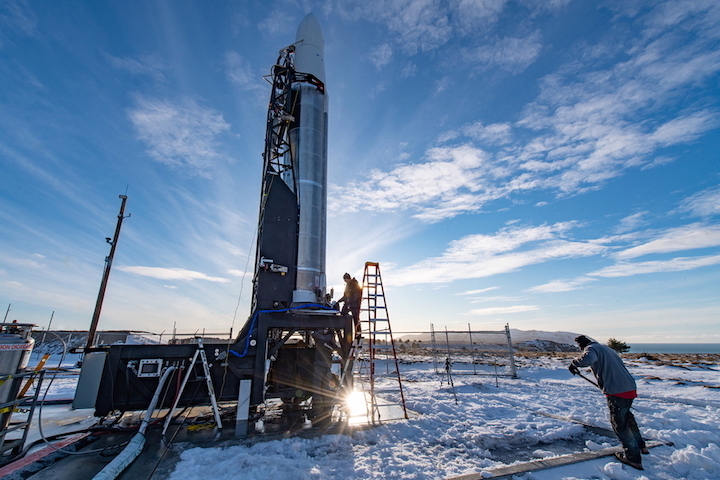 After missing out on an opportunity to win up to $12 million in prize money through DARPA’s Launch Challenge earlier this month, Astra is gearing up for another possible orbital launch attempt next week from Alaska, the company’s chief executive said Friday.

Chris Kemp, Astra’s co-founder and CEO, said in an email Friday to Spaceflight Now that Astra is not planning to launch Monday, but the company is “working towards a possible launch attempt later in the week” from the Pacific Spaceport Complex at Kodiak Island, Alaska.

The company’s first small satellite launcher was scheduled to take off during a two-week window in late February and early March in a bid to win the DARPA Launch Challenge. But schedule delays and an aborted countdown on the final day of the Launch Challenge window March 2 kept Astra from winning a $2 million prize from DARPA, which would have allowed the company to proceed to a second mission later this month with a $10 million prize attached.

Astra’s launch team scrubbed the March 2 launch attempt after detecting suspect data from a sensor in the rocket’s guidance, navigation and control system. At the time, Kemp said Astra could try again within weeks.

“We are focused on ‘root-causing’ the anomaly we saw with the sensor,” Kemp said March 2. “Whether it’s an issue with the actual sensor, whether it’s something on the vehicle that we need to better understand, as soon as we address the issue definitively and can get a license and put the regulatory stuff in place, we’ll launch again.

“That probably is not a day or two,” he said March 2. “It’s more like a week or two, but it’s certainly not a month or two.”

Kemp said Astra is “managing” affects of the COVID-19 coronavirus pandemic on the company’s plans.

“We are managing the impact of COVID-19 to operations, with an emphasis on safety of employees and range support staff,” he said Friday in an emailed statement. “We have a very small team deployed in Alaska and are otherwise managing operations remotely.”

But there are exceptions “to maintain continuity of operations of … federal critical infrastructure sectors,” according to the executive order.

One of the industries exempt from the order is the “critical manufacturing sector,” which includes “aerospace products and parts manufacturing,” according to a Department of Homeland Security website. 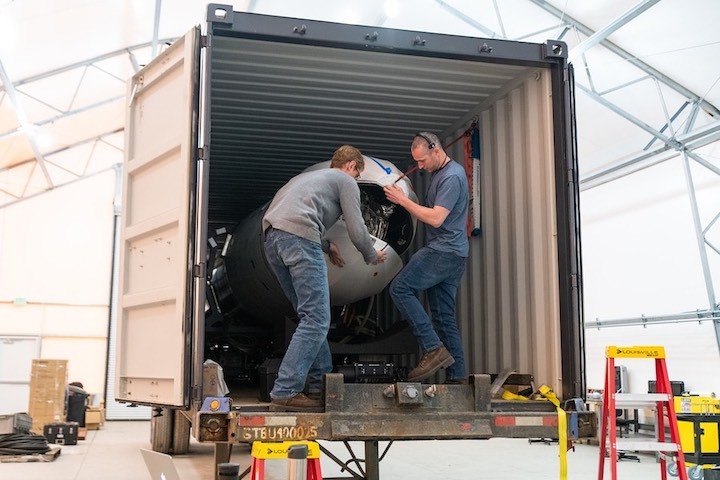 At Astra’s headquarters in California, engineers and technicians are setting up a rocket assembly line to mass-produce small satellite launchers. There is also a mission control center in Alameda, where managers oversee launch countdowns. Only a handful of workers are needed to set up the rocket at the launch site.

The U.S. military, commercial customers and other clients are among Astra’s potential customer base. The company says its rockets can launch with a small crew, requiring just days to set up a portable launch pad. The rocket itself, which measures 38 feet (11.6 meters) long, can fit into a standard shipping container and be towed by truck.

Astra’s first orbital-class rocket — named Rocket 3, or Rocket 3.0 —  can haul around 25 pounds (55 kilograms) of payload into a polar sun-synchronous orbit, according to Astra. The specific rocket awaiting liftoff from Alaska has been designated “1 of 3.”

“This was our first test launch of Rocket 3, and we called it 1 of 3 because we believed that it would probably take three launches before we could successfully deliver a satellite into Earth orbit, so we knew that this was a long shot going into it, but understood how strategically important responsive launch was to the government,” Kemp said in a previous press conference.

Astra was established in 2016 and operated in stealth mode until early February, when Bloomberg published an exclusive story about the company’s progress and plans.

For the DARPA Launch Challenge, Astra aimed to launch three CubeSats for the Department of Defense and the University of South Florida, plus an experimental radio beacon to help in the identification of objects in space.

DARPA officials said earlier this month the payloads would be removed from the rocket after the end of the DARPA Launch Challenge and returned to their owners. Officials have not identified what payloads will be on the next Astra launch attempt.

BREAKING: “Anomaly” at Pacific Spaceport Complex launch rehearsal, no injuries as a result

The Pacific Spaceport Complex reported an “anomaly” on a launch pad during a rocket launch dress rehearsal on Monday. The anomaly did not result in any injuries, according to Alaska Aerospace CEO Mark Lester.

Reached shortly after the incident, Lester said “I can confirm we had an anomaly on the launch pad. We are executing our emergency checklist. We request everyone stay clear of the area to allow our crew to address the situation.”

No details have been released yet as far as what caused the anomaly. Lester said Astra’s launch, previously scheduled for Tuesday, has been cancelled.

At 5 p.m. Lester said the emergency response had concluded. “The area is still hazardous and should be avoided. There will be personnel on site overnight to monitor,” he said.

California-based rocket startup Astra had scheduled its rocket “One of Three” to launch from the Narrow Cape spaceport this week. Astra has not yet responded to a request for comment.

This is a developing story. KMXT will have more details as they become available.