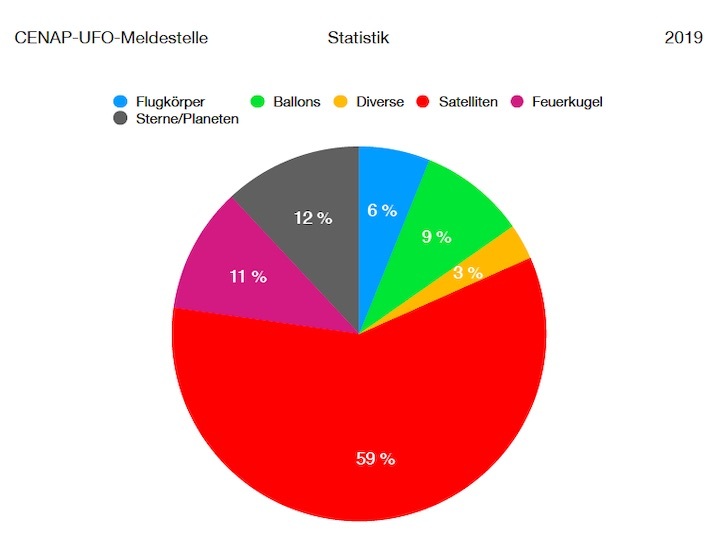 NASA Wants You to Photograph Starlink Satellites With Your Smartphone

SpaceX and others plan to launch thousands of new satellites into low-Earth orbit, creating streaks that cut through astronomers’ images. Now NASA’s education office is asking citizen scientists to help document the problem. 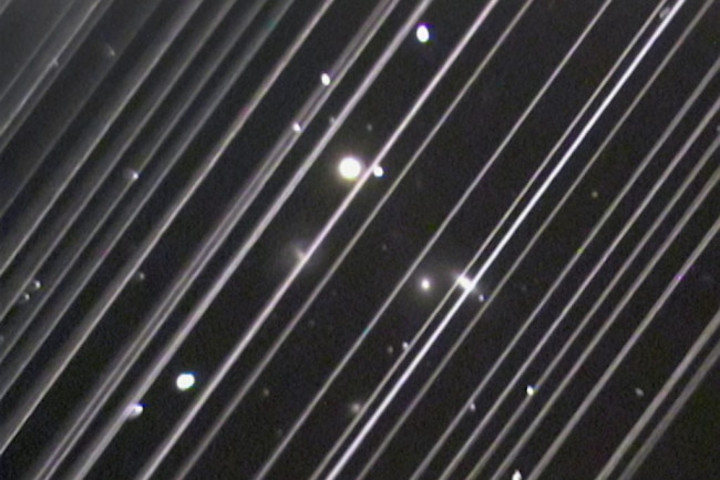 Telescopes at Lowell Observatory in Arizona captured this image of galaxies on May 25, their images marred by the reflected light from more than 25 Starlink satellites as they passed overhead. (Credit: Victoria Girgis/Lowell Observatory)

Over the coming years, Elon Musk’s private spaceflight company, SpaceX, will launch thousands of small satellites as part of an effort to provide global, space-based internet. But with each launch, astronomers have grown increasingly worried that this satellite constellation, called Starlink, will interfere with their telescopes’ abilities to study the night sky. This week, scientists with the Russian Academy of Sciences announced that they’ll take their concerns about Starlink to the United Nations, Newsweek reported.

And now NASA’s education office has launched a project that asks for the public’s help documenting these satellite streaks as part of a long-term effort to study how the technology will change our night sky. Anyone with a modern smartphone and a tripod can contribute to the Satellite Streak Watcher project.

“People will photograph these Starlink satellite streaks, and we’ll collect a large archive of these over time,” says astronomer Sten Odenwald, Director of Citizen Science for the NASA Space Science Education Consortium. “It’s going to document the degradation of our night sky by these low-Earth orbit satellites.”

Astronomers have been losing the fight against light pollution for decades. Increasingly powerful lights from streetlamps, sports complexes, businesses and homes reflect their radiation into the night sky, washing out the stars. Light pollution increases about two percent each year in both areas lit and the brightness of that light, according to a 2017 study. The public is already documenting these changes through citizen science projects that measure light pollution.

But until recently, the attention has typically focused on the ground.

That started to change with the first few launches of Starlink satellites. Astrophotographers and amateur astronomers immediately noticed these spacecraft streaking across the sky. The streaks are particularly prominent just after launch, when the satellites are still bunched together. Some skygazers have compared it to a “string of pearls” drifting across the night sky.

Many satellites are visible from Earth in the hours after sunset and before sunrise, when sunlight reflects off their surfaces and solar panels. The closer a spacecraft is to Earth, the brighter it appears to those looking up.

SpaceX's satellites stand apart because of their shear volume and low orbit.

Sixty Starlink satellites prior to being released into orbit. (Credit: SpaceX)

To beam internet connectivity back to Earth, many of these will have a shallow orbit. There also has to be thousands of them to provide global coverage. By the time SpaceX is finished, the company could have as many as 40,000 new spacecraft in orbit. They’ve already announced plans to launch 60 satellites every other week through 2020. For comparison, there are currently just over 2,000 total satellites in orbit right now. SpaceX isn’t the only company with visions of dominating satellite internet, either. A handful of competitors, including Amazon, intend to launch their own constellations.

For its part, SpaceX has started experimenting with low-reflectivity materials to coat the satellites. However, from an engineering perspective, satellites need reflective materials to keep cool.

“The problem is made worse because the satellites are in low-Earth orbit,” Odenwald says. “They’re brighter because they’re lower. And because there are so many of them, it means (astronomers) get maybe as much as an hour of bright streaks going across their sensitive photographic detectors.”

Those numbers are the real worry for scientists. Astronomers have already moved their telescopes to increasingly remote locations to avoid light pollution. But there’s nothing they can do to avoid bright satellites streaking through and ruining their images.

Odenwald says that inspired him to launch the Satellite Streak Watcher project and ask citizen scientists all over the world to take pictures of these satellites with their cellphones.

To take part, you’ll need a very basic tripod and a reasonably new smartphone. The veteran astronomer says he’s been amazed at the quality of night-sky images now coming from smartphones. Many phones are now sensitive enough to capture the Milky Way, and he’s even seen detailed shots of the International Space Station taken by holding a phone up to a telescope eyepiece.

“If you’ve got a new phone, it’s probably good enough to do this, and several of them have night sky modes, which is perfect,” he adds. Even phones dating back to 2016 or so should be able to photograph these satellites in about four seconds.

You’ll want to master your phone’s long exposure or night sky setting before heading outside. On older iPhones, you can also capture a Live image and set the exposure to 10 seconds. These work differently than traditional DSLR cameras, which leave the shutter open to capture longer exposures, but the end result is very similar.

You’ll also need to know when the satellites are passing overhead. To find out, you can go to Heavens-Above.com and enter your location. The website will give you a list of satellites and the times that they’re passing over your region. Setup your tripod in advance and point it at the region you want to photograph, then wait for the satellite to appear. To upload your images, simply go to the Satellite Streak Watcher project website and include your exposure and the background constellation.

Even astrophotographers with DSLRs are welcome to contribute. They should use a lens wide enough to capture a broad swath of the night sky, but not one that’s so wide it distorts the field. About a 50mm lens should be perfect.

Odenwald says there’s not a clearly defined scientific end goal at the moment. Rather, he’s hoping to document these streaks for a five-year period so that one day, astronomers can tap into the photos and study how satellite streaks have changed over time.

Throughout the history of astronomy, all-sky surveys -- traditionally done with much larger telescopes -- have proven pivotal to a broad range of research, he points out. And the ways those images proved useful wasn’t always anticipated by the astronomers who gathered them.

“We could have 5,000 to 10,000 of these satellites buzzing around low-Earth orbit at some point,” Odenwald says. If nothing else, “you could do before and after photos to show how much more annoying the sky is than it used to be.”

Russia's Academy of Sciences will complain to the United Nations about the light reflected from the Starlink satellite system, saying it interferes with the work of astronomers, it has been reported.

Batches of satellites continue to be sent up into orbit to work with ground transceivers with the aim of providing greater broadband internet access on Earth, especially in areas where connections are harder to get, or more expensive.

Lifted up on SpaceX's reusable Falcon 9 rocket, the first Starlink launch took place on May 23, 2019, and the project is a key part of billionaire Elon Musk's cosmic plans.

But Nikolai Samus, a researcher from the Russian academy, said the network of hundreds of satellites reflects light from the sun and can corrupt between 30 to 40 percent of astronomical images.

According to state-run news agency RIA Novosti, the Russian academy's concerns are shared by colleagues from the European Space Agency and it will take them to the U.N.

Samus told an audience at the Moscow planetarium, "We are currently drafting a letter (for the U.N) from the Royal Academy and tomorrow we will discuss this issue with our vice president Yuri Balega. Such a letter will come from us."

Last month, a batch of 60 Starlink satellites were launched, bringing its constellation to 300 satellites, according to Tech Crunch, which reported that they could be providing internet access to the U.S. and Canada by the middle of 2020.

But concerns have been raised before about the impact of Musk's Spacelink plans which would add potentially thousands of satellites into orbit, increasing the risk of creating space debris.

The head of the Russian defense company Vympel, Sergey Boev has expressed concerns that the Starlink system could be used for military purposes, Russian media reported.

He believed it was cause for alarm that the newly-appointed commander of the U.S. Space Force, John Raymond, had met with Musk to discuss how the the satellites could help the Pentagon, according to Russian outlet news.ru.

Russia has previously taken issue with Musk's plans, accusing SpaceX of pushing it out of the carrier rocket market. Moscow announced in September 2019 it would build its reusable Argo rocket to compete with Musk's Falcon 9 rockets.

Russia hopes it can supply the International Space Station [ISS] by 2024, with domestically produced rockets, according to the RBC news website.

The sparkling satellites seen across New Zealand skies will only become more common as space becomes "more like the wild west", a scientist says.

American entrepreneur Elon Musk's SpaceX has been launching Starlink satellites in batches of 60 since May last year and has about 300 orbiting Earth.

The satellite chains have come in for criticism from astronomers worldwide because it reflects sunlight creating light pollution.

Duncan Steel, a space scientist based in Nelson, said space had become "lawless".

"Apparently they're planning to have 12,000 up before too long and they're aiming for 42,000 within the next few years, and they're not the only nation doing this.

"I'd say in some ways space is becoming a bit like the wild west, somewhat lawless and certainly these things will cause problems for ground based astronomy - optical because of the reflection of sunlight and also radio astronomy because of the light radiant pollution."

Steel said there was no enforceable regulation to stop companies like SpaceX from launching as many objects as they can into orbit as the United Nations are "powerless". 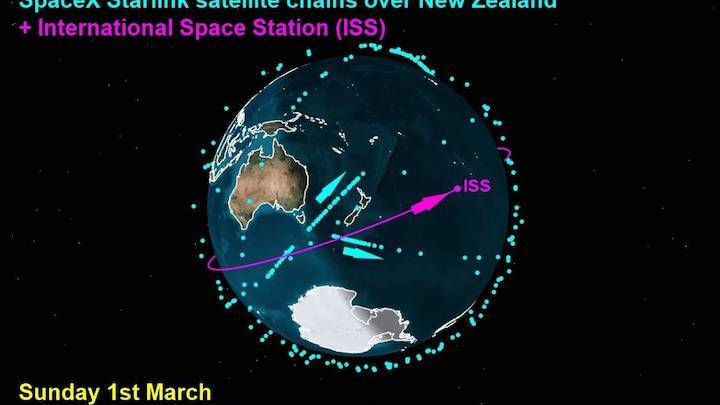 "There's nothing to stop them from doing this. To actually launch something you need permission from your nation because there are various UN treaties with regards to the use of space and the UN has a specific office to deal with this - Space Affairs as its called in Vienna, but it doesn't have any power."

"So these companies get licensed by the launching nation to put things into space then there's nothing that can be done to stop them as such. It's like saying UN has rules which preclude warfare but it doesn't mean to say there's no wars."

Steel said launching too many satellites into space would create another problem with space debris causing collisions due to congestion.

"That clearly is going to get worse and worse as time goes by and we put more things into orbit."

On Saturday evening, the SpaceX satellites are expected to cross New Zealand's sky at about 9pm while the International Space Station (ISS) will be crossing at about 9.59pm.

"They're very easy to see, they can be as bright as most of the stars," said Steel.

"You will see them moving in groups so they're kind of moving in step.

On Sunday, the International Space Station will passes south of New Zealand at about 9.15pm and can be seen from throughout New Zealand.

The Starlink satellites will be visible to the naked eye between about 9pm and 9.45pm on Sunday evening.

"(The ISS) will appear as bright as the very brightest stars in the sky," Steel said.

"As the sky darkens and your eyes get better adjusted, you should be able to see dozens of them (SpaceX satellites), each taking about seven or eight minutes to pass from the western horizon to the eastern side of NZ, though the precise positions in the sky depends on where you are located." 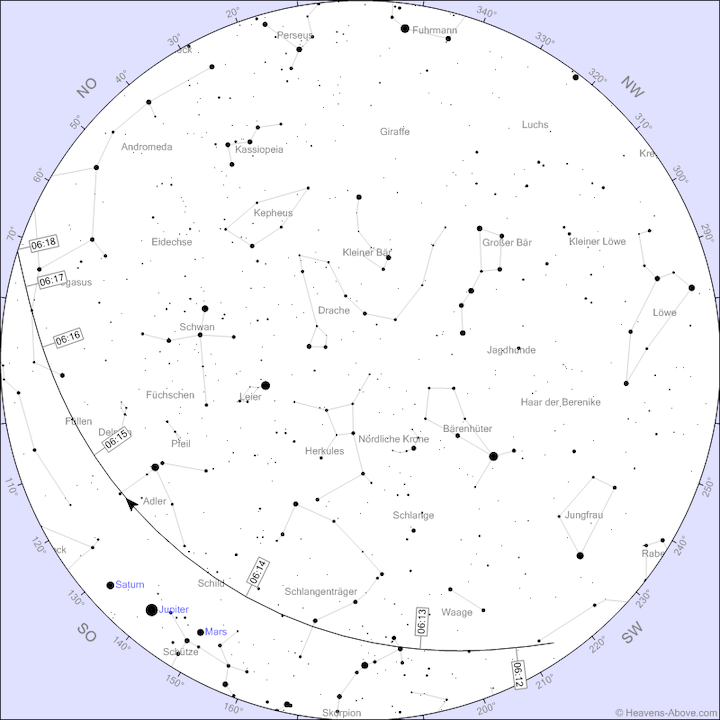 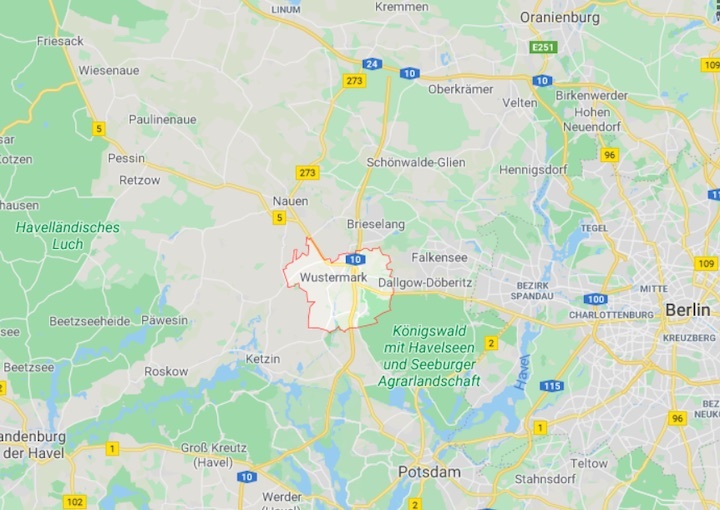 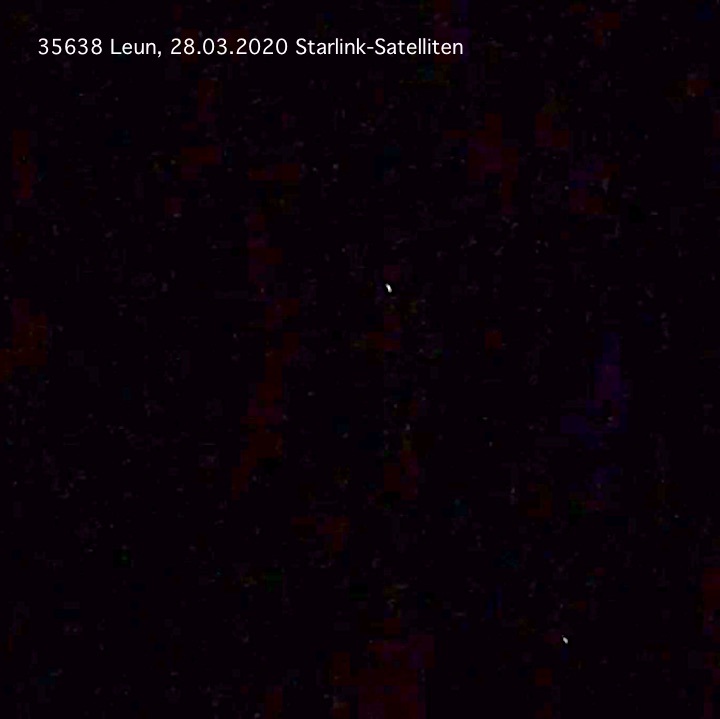 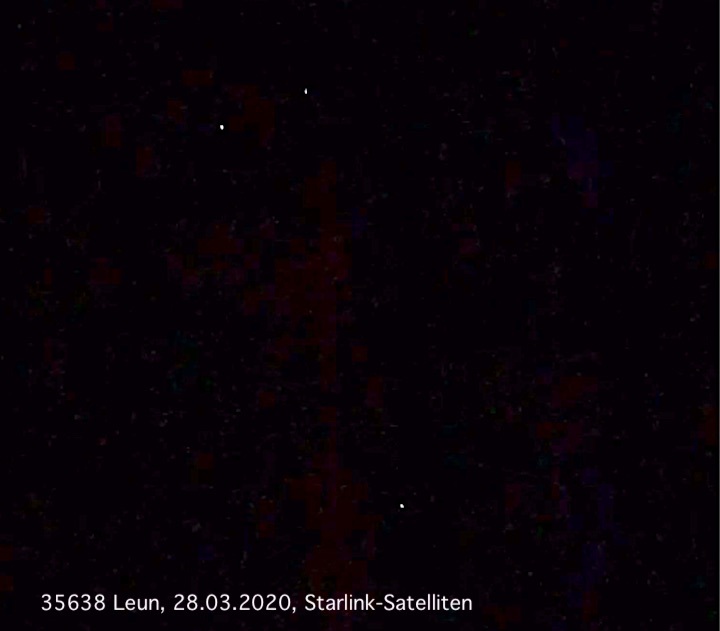 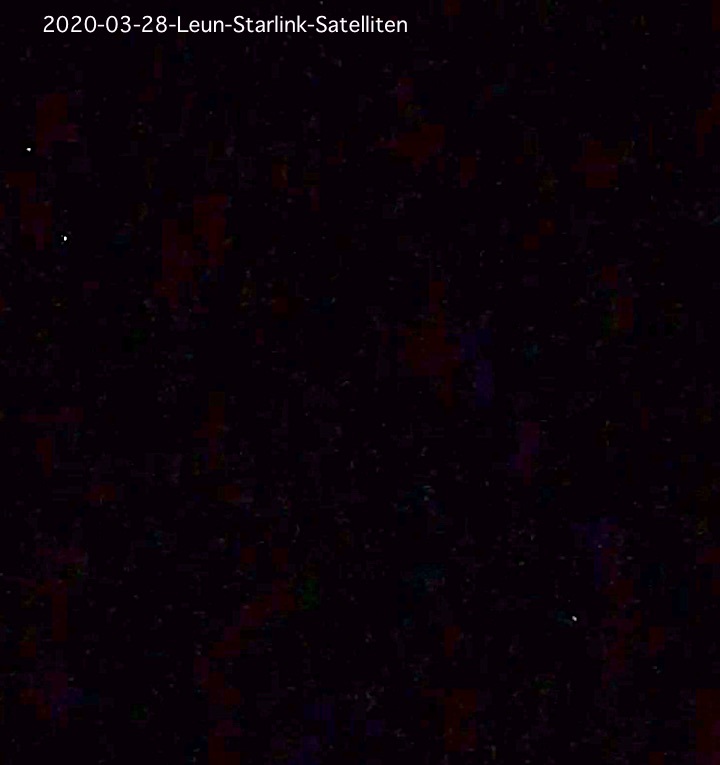 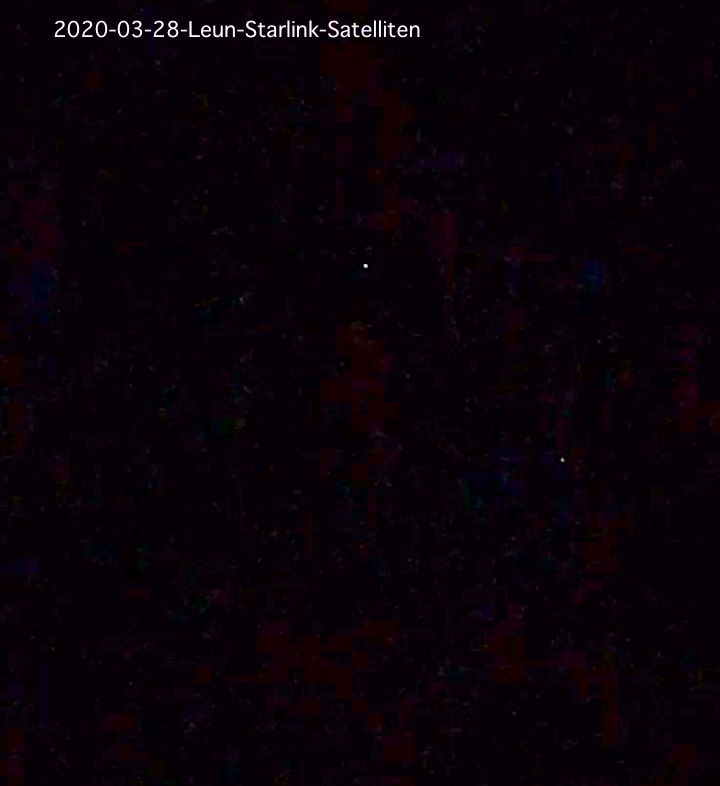 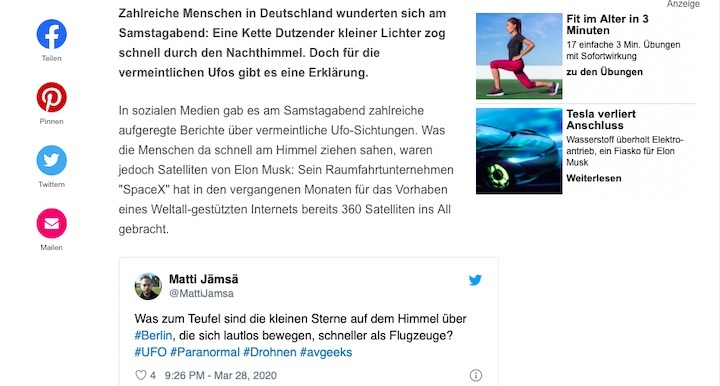 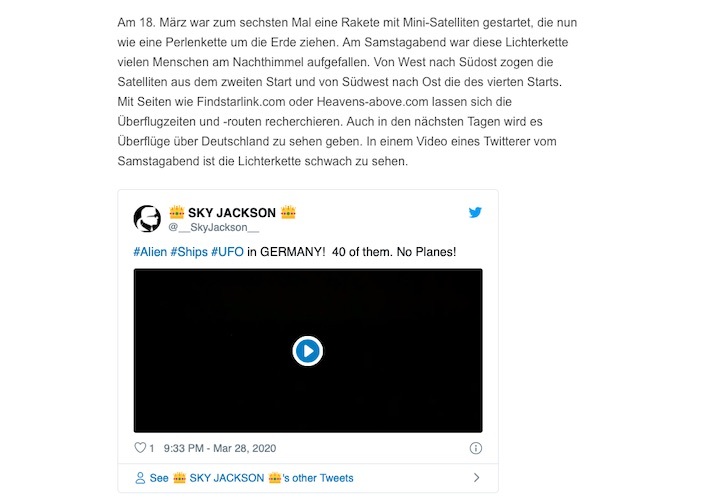 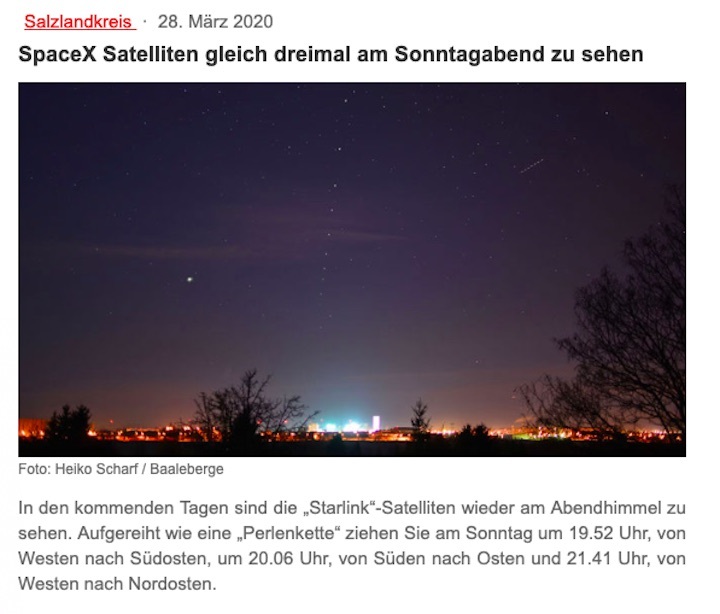 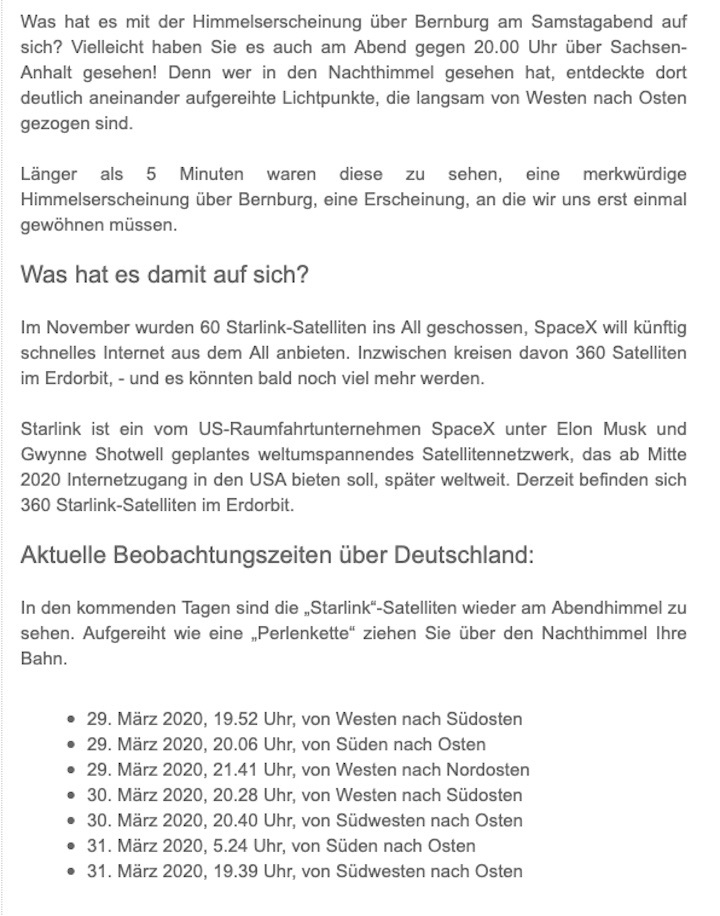 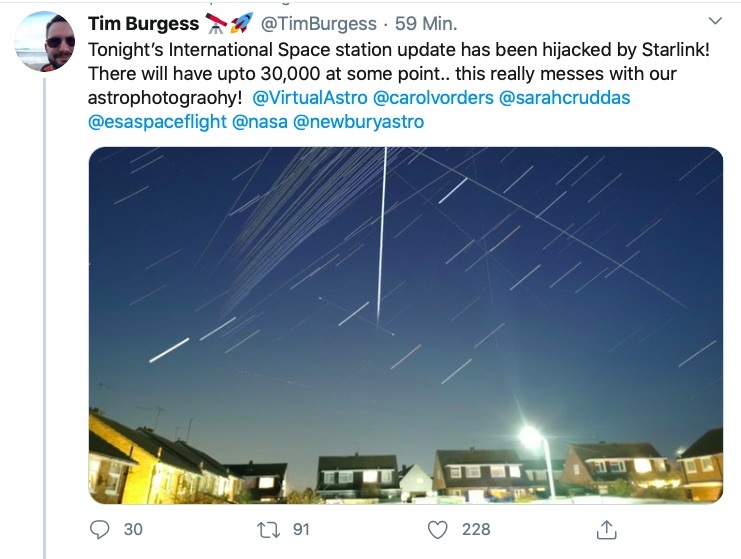 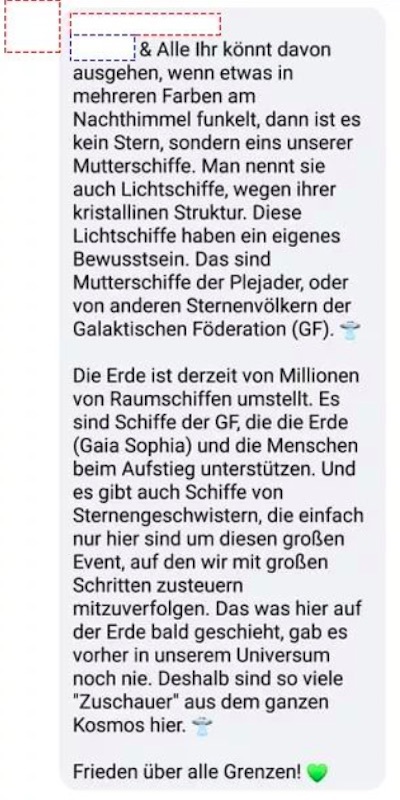 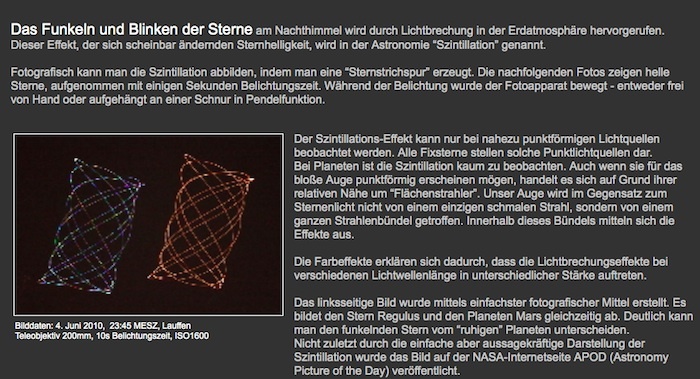 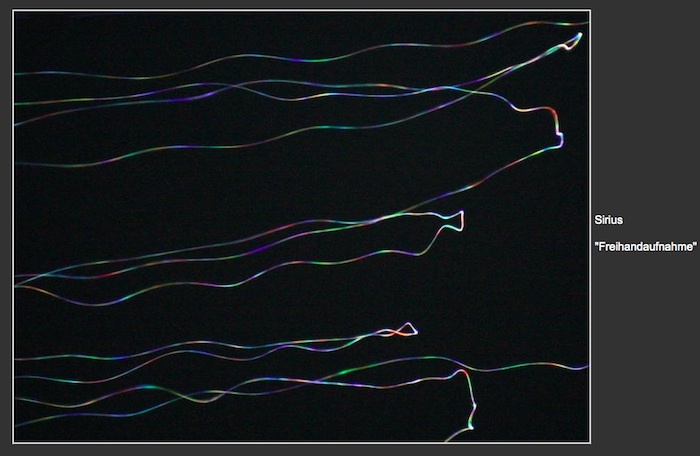 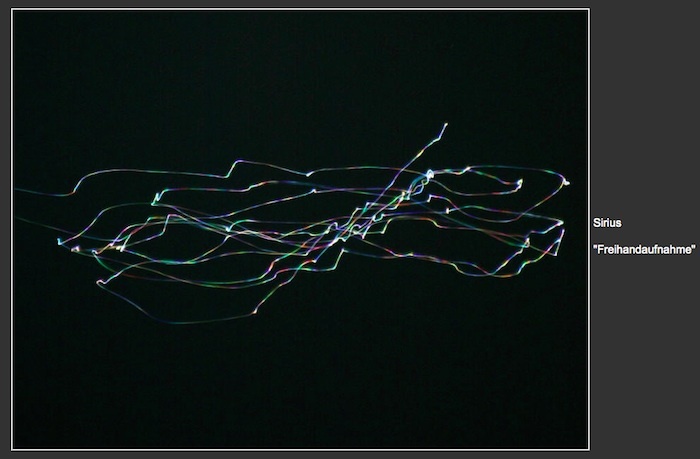 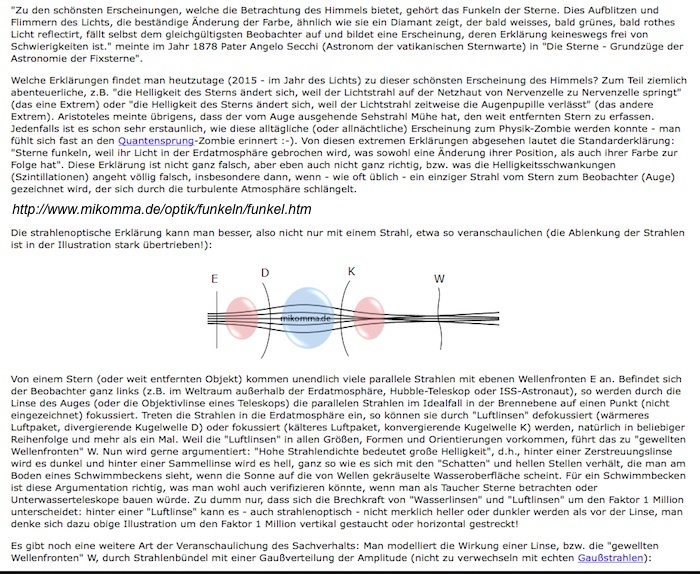 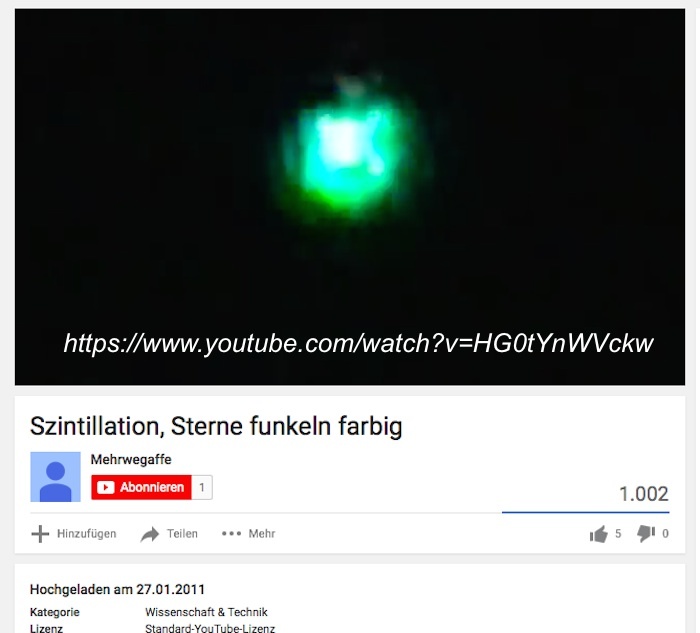 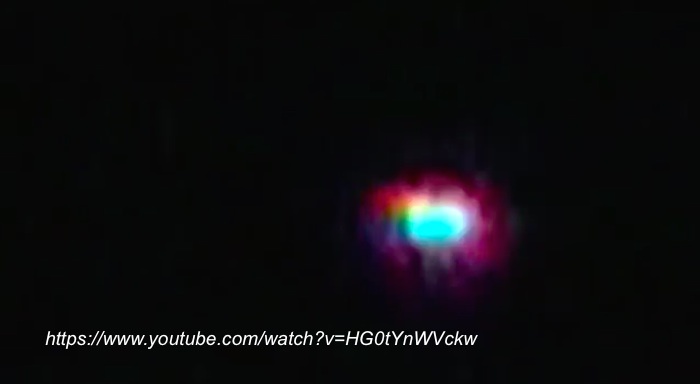 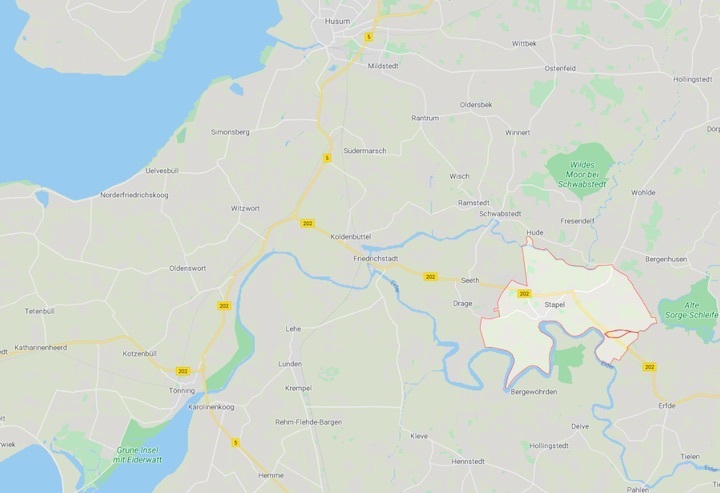 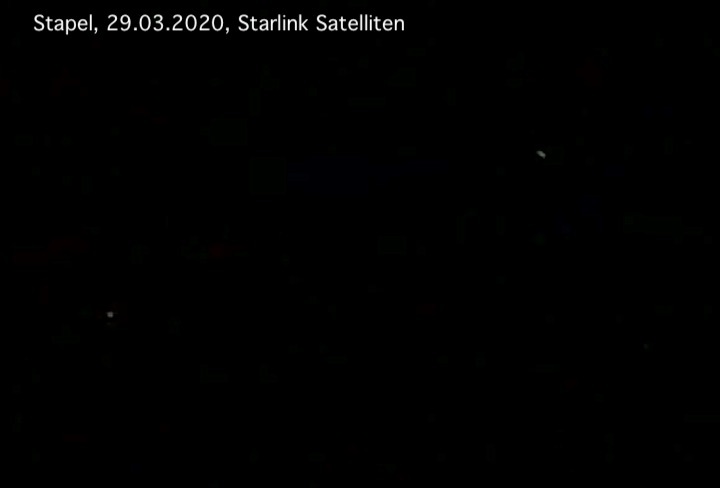 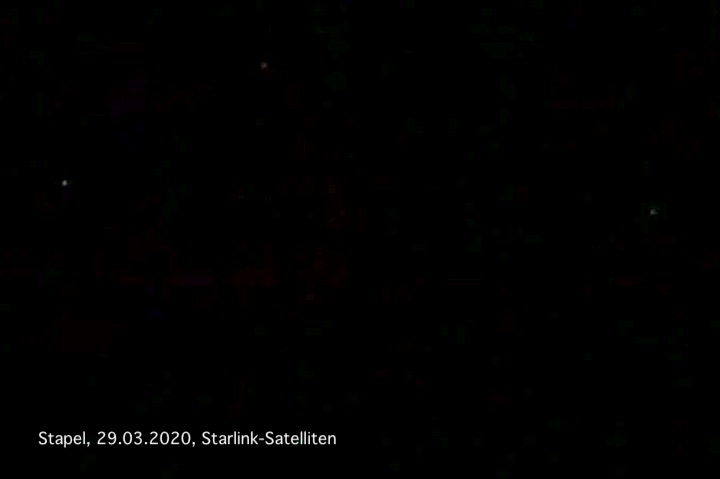