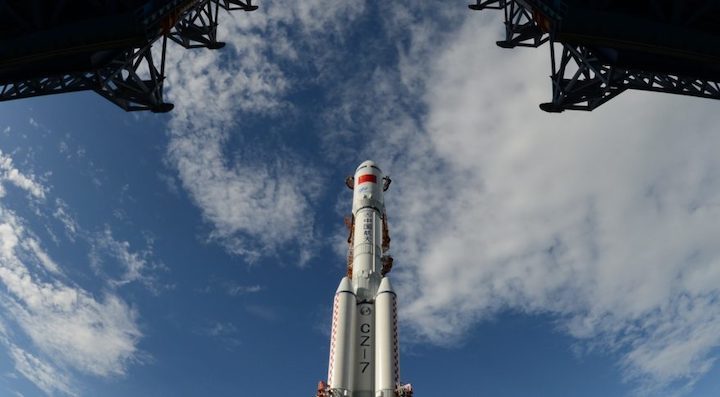 The China Aerospace Science and Technology Corp., (CASC), which developed and manufactured the rocket, typically announces launches following declaration of mission success. Similar mission profiles are usually announced to be successful around an hour after launch, but no announcement was made.

State news agency confirmed failure (Chinese) just under two hours after launch, with no cause nor nature of the failure stated. An investigation into the anomaly will follow.

The payload for the launch was earlier stated to be named ‘new technology verification satellite-6’. No further details were released ahead of launch.

Measures to counter the spread of the novel coronavirus have been in force at Wenchang spaceport, though launch campaigns continued.

The launch preparations were conduced discreetly at Wenchang. No announcement of rollout was made nor were airspace closure notices issued. Previous launches from Wenchang, including the return to flight of the Long March 5 in December, were live streamed.

Preparations for the test flight of the Long March 5B are also underway at Wenchang. It is unclear if the Long March 7A failure will have any impact on the launch planned for mid-late April.

The Long March 7A is a variant of the standard Long March 7, which has flown twice. A 2017 mission to test the Tianzhou refueling spacecraft with Tiangong-2 space lab was its most recent activity. The launcher uses RP-1 and liquid oxygen propellant and could replace older models using toxic propellants.

It modular design means it shares common engines with other new, cryogenic Long March vehicles. Depending on the cause of the anomaly, the failure could impact upcoming missions.

The RP-1/liquid oxygen side boosters and core stage share commonalities with the Long March 5, including YF-100 engines. An issue with these engines could potentially impact planned Long March 5 missions, including China’s first independent interplanetary mission—to Mars—in July. It could also have knock-on effects for China’s space station plans.

If the issue was with the second stage YF-115 engines, the impact of the failure could be limited to the Long March 6 and 7 series rockets. A new variant of the Long March 6 developed by the Shanghai Academy of Spaceflight Technology is expected later in 2020.

An upper stage problem could see knock-on effects for the older, Long March 3 series rockets, as the Long March 7A third stage is adapted from the Long March 3B. The 3B is the current workhorse for Chinese GTO launches.

The 60.13-meter-long Long March 7A  has a liftoff mass of around 573 metric tons, according to the China Academy of Launch Vehicle Technology, a CASC subsidiary.

The 7A uses the same 3.35-meter-diameter kerolox core and four 2.25-meter-diameter side boosters as the stand Long March 7 but includes an additional hydrolox third stage. The added stage is adapted from the older generation Long March 3B rocket to allow it to send payloads to GTO.

The new launch vehicle could become China’s main rocket for communications satellite missions. The modularised, cryogenic rocket could have benefits in terms of cost, but also in reducing threat to life and property.

The older, hypergolic Long March 3B is China’s current option for launches to GTO. The 3B launches from deep inland at Xichang, Sichuan province, resulting in spent stages frequently falling on inhabited areas. The Long March 7A launches from the coastal Wenchang spaceport, meaning its flightpath is over the sea.

The new rockets are delivered to Wenchang on the island province of Hainan via specially designed cargo ships. The older, smaller diameter Long March vehicles are transported by the nation’s rail system to inland launch centers.

Launch of the Long March 7A was conducted despite the impacts of the coronavirus outbreak.

China appears committed to conducting more than 40 launches across 2020, despite the outbreak. Expace, a launch service provider spin-off from defense contractor CASIC, has resumed activities despite its facilities being close to the epicenter of the outbreak in Wuhan, Hubei. The city and province had been in lockdown, preventing work and transport of Kuaizhou rockets to Jiuquan space center in the northwest of China.

The rocket blasted off at 9:34 p.m. Beijing Time from the Wenchang Space Launch Center on the coast of south China's Hainan Province, but a malfunction occurred later.

Chinese space engineers will investigate the cause of the failure. 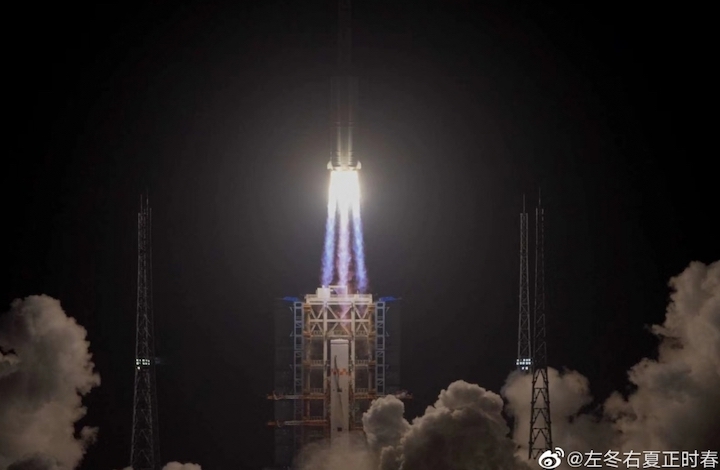 China suffered a launch failure on the first flight of the new version of the Long March-7, the Long March-7A launch vehicle on Monday. Launch from the Wenchang Space Launch Center took place at 13:34 UTC from the LC201 Launch Complex.

According to Chinese news official statements about the launch, “Chinese space engineers will investigate the cause of the failure,” without giving any more details about the reasons or when the failure occurred.

At this time is not possible to determine if this failure will impact the near term orbital launch schedule of Chinese rockets. The problem seems to have surfaced when the 3rd stage was to operate and if this is the case, then this will probably lead to the grounding of the Long March-3B/G rockets.

The Long March-7A represents a new step in replacing the old families of hypergolic fuelled launchers that have been the workhorse of the Chinese space since its inception in the ’60s.

The new launcher is China’s new-generation medium-lift orbital launch vehicle developed by China Academy of Launch Vehicle Technology (CALT). The initial project was to be a modernized version of the CZ-2F to be used on the unmanned and manned flight missions in China’s “Manned Space Program”.

While the LM-7 will be mainly used for orbiting the new Tianzhou logistics cargo vehicle for the modular Tiangong space station, the LM-7A will be used for orbiting satellites in high energy orbits, also replacing the hypergolic launchers of the LM-2, LM-3 and LM-4 rocket range.

The new rocket is powered by the YF-100 engine, with the first stage using two engines and strap-on boosters using a single engine each. It includes the YF-115 on the second stage using four engines, using kerosene as fuel and liquid oxygen as oxidizer.

The development of the YF-100 began in 2000 at the Academy of Aerospace Liquid Propulsion Technology. The engine was certified by the State Administration of Science, Technology and Industry for National Defense (SASTIND) in May 2012.

The first-stage is assisted by four strap-on boosters at launch. The boosters are similar to the first stage, but having a 2.25 m in diameter. The boosters consist of an oxidizer tank, an inter-tank ring section, a fuel tank, an engine frame, a tail section and an aerodynamic nose attached to the front end of the booster covering the upper bulkhead of the liquid oxygen tank.

Each booster is powered by a single 1,200 kN YF-100 engine with a swinging nozzle that can be oriented at radial direction only.

Wenchang Space Launch Centre is located in the northeast corner of Hainan Island on the southern coast of China.

Both pads are similar and are equipped with a fixed umbilical tower, underground flame deflector trenches and ducts. Similarly to what happens at the other Chinese launch centers, the umbilical towers have swing arms to allow technicians to access and inspect the launch vehicle and payload.

This is a new approach to the launch vehicle preparation for flight because at the other Chinese launch centers the launchers are stacked and tested for flight at the launch platforms.

After being stacked at the vehicle assembly and integration building at the top of a mobile launch platform, the rocket is rolled to the launch pad.

The journey takes several minutes to cover the 2,800 meters separating the vehicle assembly and integration buildings, and the launch pads.

After arriving at the launch pads, the mobile structure is then placed above the flame trench and the necessary umbilical connections between the fixed structures and the mobile platform are established ahead of the flow to launch.

The new launch complex provides additional versatility that isn’t available at the other three launch sites. Wencheng also allows for an increase in performance for the launch vehicles gained from Earth’s rotational because is closer to the Earth equator. This reduces the amount of propellants required for the satellite’s maneuvers from the transit orbit to GEO.

Also, the launch vehicle can fly from the launch site to the southeast direction into the South Pacific, avoiding the possibility of rocket debris falling into any populated area – which has occurred during numerous Chinese launches.