A new study suggests there are key differences between the compositions of Earth and its natural satellite, with significant implications for lunar history 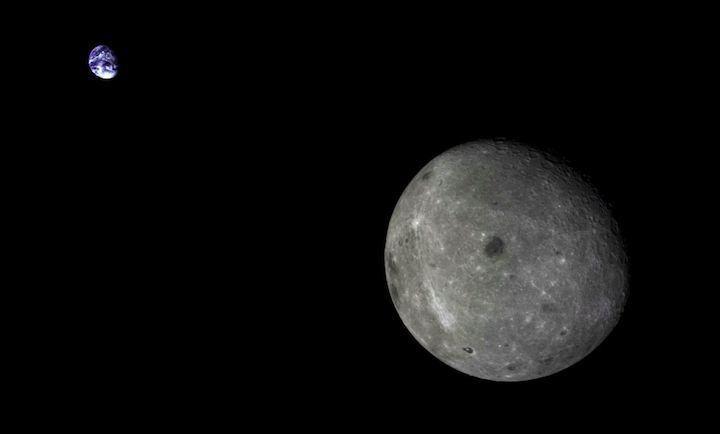 Though the moon is our closest, most familiar celestial neighbor, the question of how it formed is surprisingly unsettled and controversial. Scientists widely agree that about 4.5 billion years ago, a large object called Theia slammed into Earth—an idea known as the giant impact hypothesis. What happened next is up for debate, however. Some scientists favor a “classical” model, where the impact created a lot of debris that gradually clumped together into the moon, while Earth was left intact. Others favor more radical models, such as Earth and Theia vaporizing and producing a doughnut-shaped ring of superheated debris known as a synestia that eventually formed our planet and its natural satellite. But “none [of the theories] has reached a level of consensus in the community,” notes Jay Melosh of Purdue University.

A new study published in Nature Geoscience may resolve some of the issues. Erick Cano of the University of New Mexico and his colleagues examined samples of the lunar surface collected by the Apollo missions and found that the deeper under that surface you go, the more different the moon looks from Earth. This result suggests that the moon and our planet are not as identical in composition as once thought, potentially ruling out the synestia model, which supposes that the latter body and Theia mixed their material thoroughly before separating out into Earth and its satellite. The findings may harken back to the more classical models of the moon’s formation. “People have been fighting about this for 60 years,” says Mark Thiemens of the University of California, San Diego, who was one of the reviewers of the paper. “The fact that you can identify part of the moon with the impactor, that’s a really big deal.”

One of the key ways we compare the compositions of Earth and the moon is by measuring the oxygen isotopes—that is, atoms of oxygen with different mass—that are present in samples. Objects that formed in different locations within the solar system are thought to have varying amounts of such isotopes. Previous studies have found that the moon’s isotopes are pretty similar to those of Earth, if you average over where samples were taken on each body. This observation suggests either that a lot of Earth-Theia mixing took place or that Theia formed in a similar position in the solar system as our planet did. If Theia formed in a different location, or if there was minimal mixing after the collision, the isotopes should vary more widely.

But rather than averaging out the samples, Cano’s team looked at where each one originated on the moon and uncovered notable differences. The researchers found that although the oxygen isotopes near the surface were similar to Earth’s, those lower down were different. “The identical oxygen isotope values were a conundrum for the giant impact hypothesis, because these models predict that the moon should primarily be made of material from the impactor,” Cano says. “What we found was there is actually variation in the oxygen isotope values, depending on the different rock types.”

The results suggest that remnants of Theia were stored deep within the lunar mantle following the impact. At the surface, meanwhile, an atmosphere of vaporized silicate rock resulting from that impact gradually showered the moon, contaminating it with material from Earth. “This was raining down onto the molten moon. However, it wasn’t completely mixed into the lunar magma ocean,” Cano says. “That’s why we think the samples from the deepest [regions] have the least amount of contamination.”

Melosh says the findings could have serious implications for the moon formation debate. “The overall implication of this result is it may rule out, or at least cast some doubts, on the synestia model,” he says. Yet Sarah Stewart of the University of California, Davis—who, with her colleague Simon Lock, proposed the synestia model in 2018—says the findings do not completely dismiss her theory just yet. Major questions about the moon’s formation remain, not least why Earth’s oxygen isotopes appear to be more similar to those of Theia than other places, such as Mars. “We are still stuck with the problem of making the moon with an object that had to be very close to Earth or a lot of mixing during the event,” she says. “Exactly how much [mixing] is still an open question.”

The new results, though, show there is still much to be learned about the moon’s composition, and it may be some time before scientists can agree on a single theory as to how the satellite formed. “A lot of people are really interested in getting to know how it was made,” Thiemens says. But if a smoking gun for Theia does exist beneath the surface, it could help us finally work out where this impactor came from and how it led to the creation of our celestial neighbor.