The Cosmosphere's "Apollo 13: A Mission of Survival" traveling exhibit, featuring the world's highest resolution photo op with the Apollo 13 command module Odyssey, is the first offering of the SpaceWorks Exhibit and Artifact Rental Program. (Cosmosphere)

Hutchinson, we have a new space exhibit rental program.

The Cosmosphere space museum in Hutchinson, Kansas is expanding its existing SpaceWorks restoration and replication division to include a new line of space artifact rentals and display fabrication services. The program is launching with a new traveling exhibit timed to celebrate the 50th anniversary of NASA's Apollo 13 mission in April.

"Over the years, the Cosmosphere has leased artifacts to museums and exhibits across the globe, but never developed a formal business plan around the program," Jim Remar, Cosmosphere president and CEO, said in a statement. "As we look to diversify and expand the operation beyond our museum walls, we formally developed and launched this program."

"It's my belief that the SpaceWorks Exhibit and Artifact Rental Program can realize tremendous growth in the years to come," said Remar.

Developed to take advantage of the Cosmosphere's extensive collection of more than 12,000 space artifacts — comprising the world's largest archive of U.S. and Russian space memorabilia — the exhibit and artifact rental program will build upon SpaceWorks' history of supporting the Cosmosphere, other institutions and Hollywood projects. In addition to restoring "Odyssey," the Apollo 13 command module, and conserving the Mercury spacecraft "Liberty Bell 7" and the Saturn V rocket engines both raised off the ocean floor, SpaceWorks as also fabricated replica props for the 2018 Neil Armstrong biopic "First Man" and the Apple TV+ alternate space history series "For All Mankind."

SpaceWorks' new traveling exhibits will cover a similar array of subjects, from "Living in Space" and space photography to the history of the Hubble Space Telescope and the crossovers between space exploration and pop culture. The first of the new exhibits focuses on the United States' third mission to attempt landing astronauts on the moon in 1970.

"Apollo 13: A Mission of Survival," employs large display panels and authentic artifacts from the Cosmosphere's collection to recount details from "NASA's most successful failure."

"We have the command module 'Odyssey' in our museum, so we have some inherent obligations to help spread the knowledge of Apollo 13," Nathan Meyer, the Cosmosphere's vice president of education and strategy, said in a museum podcast. "We've created a new exhibit, about a 1,000-square-foot [93-square-meter] exhibit that museums, libraries and public spaces can rent and bring [the Apollo 13 mission] to life in their area."

The "Apollo 13: A Mission of Survival" exhibit includes rarely seen images and objects from the problem-plagued flight that nearly stranded astronauts Jim Lovell, Fred Haise and Jack Swigert in deep space. The display will also include a unique chance to behold the Apollo 13 command module up close without visiting the Cosmosphere.

"One thing that we are excited about is that it will include the world's highest resolution image of the capsule," said Meyer. "Since [Odyssey] is in our museum, we turned it into an 8-foot by 8-foot [2.4 by 2.4-meter] element. It is a photo opportunity at a detail level that you really can't see [otherwise] unless you are standing a few feet in front of the actual capsule."

Other panels in the new exhibit step visitors through the explosion that derailed the planned moon landing, the efforts that the astronauts and Mission Control took to survive the journey and the mission's triumphant return to Earth. The public will be able to see full-size reproductions of the carbon dioxide scrubbers (lithium hydroxide canisters) that the Apollo 13 crew famously adapted to "fit a square peg in a round hole," as well authentic examples of the type of cameras and clothing used on board the spacecraft.

With the 50th anniversary coming up quickly, the SpaceWorks team is on track to have the new exhibit ready in time.

"We're hurrying to put everything into production as soon as we can, but we are ready to start booking," said Meyer. 'We have already been in touch with a lot of air and space museums throughout the country." 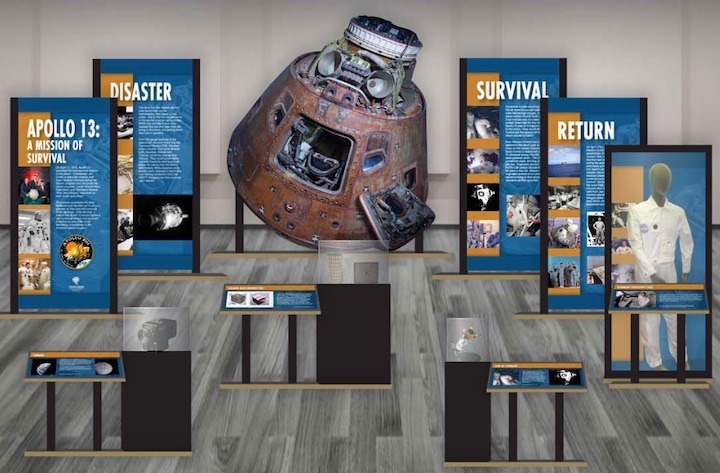 "Apollo 13: A Mission of Survival" includes display panels and real and replica items from the Cosmosphere collection. (Cosmosphere)