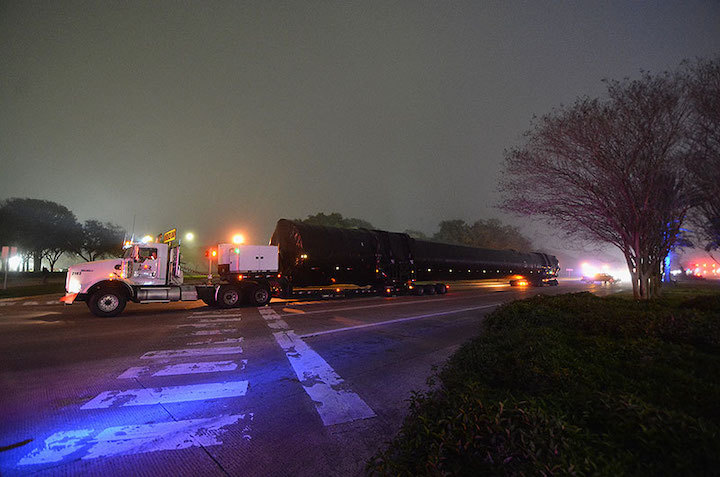 A SpaceX rocket has quietly touched down in Houston, landing under the cover of night at the NASA visitor center where it will soon go on display.

The Falcon 9 first stage, which was used to launch supplies to the International Space Station on two NASA-contracted missions, was delivered by truck to Space Center Houston late on Tuesday (March 3). The arrival came 10 months after it was first announced that the booster would be joining the outdoor exhibits at the non-profit science and space exploration learning center, which also serves as the official visitor center for NASA's Johnson Space Center in Texas.

The 156-foot-long (47-meter) booster was driven down NASA Road 1 (or NASA Parkway) on a wheeled transport. Accompanied by a police escort, the stage briefly blocked traffic in one direction as it was carefully backed into the parking lot at Space Center Houston at about 9:35 p.m. EST (0335 GMT on March 4). The delivery was not publicized in advance, so the only spectators were those who happened to be on the road or at nearby restaurants and businesses at the time.

A more public welcome is expected once the stage is on its display mounts.

Space Center Houston has been preparing the exhibit site along the border of its parking lot, adjacent to the display of NASA's original Shuttle Carrier Aircraft and mock space shuttle Independence, since August 2019. The Falcon 9 will be positioned horizontally in cradles that are high enough for visitors to be able to walk below the stage.

A cement walkway will run the perimeter of the rocket and then cross underneath it in the shape of the "X" in SpaceX's stylized logo.

Once on display, the Falcon 9 first stage will exhibit the wear and tear it received on its two launches. The 35th Falcon 9 first stage to be built, it was the first to fly on two missions for NASA. The stage first flew on June 3, 2017, lofting SpaceX's 11th resupply run to the space station on what was the 100th launch from Pad 39Aat Kennedy Space Center in Florida. The flight also marked the first reuse of the Dragon cargo spacecraft.

The stage then successfully returned for a touchdown on SpaceX's Landing Zone-1 (LZ-1) at the Cape Canaveral Air Force Station.

Six months later on Dec. 15, 2017, the flight-proven first stage lifted off again, this time with the space station-bound CRS-13 Dragon capsule. It then landed at LZ-1 for a second and last time.

"We are so excited we got CRS-11 and CRS-13, because it was the first reusable rocket segment used for a mission to send cargo to the International Space Station for NASA," William Harris, president and CEO of Space Center Houston, said in May 2019, when the booster's display was first announced. "It is really appropriate because [NASA controls the] space station from here in Houston and we have a major exhibit about the International Space Station."

The stage delivered to Space Center Houston is only the second flown Falcon 9 booster to go on display. The first has stood outside of SpaceX's headquarters in Hawthorne, California since 2016. SpaceX CEO Elon Musk also donated a flown and recovered booster to Cape Canaveral, but the details for that exhibit have yet to be announced.

The rocket's arrival at Space Center Houston comes days before the scheduled launch of a Falcon 9 with the last of SpaceX's first generation Dragon cargo spacecraft and within a few months of the expected first flight of NASA astronauts on a crewed Dragon to the space station. 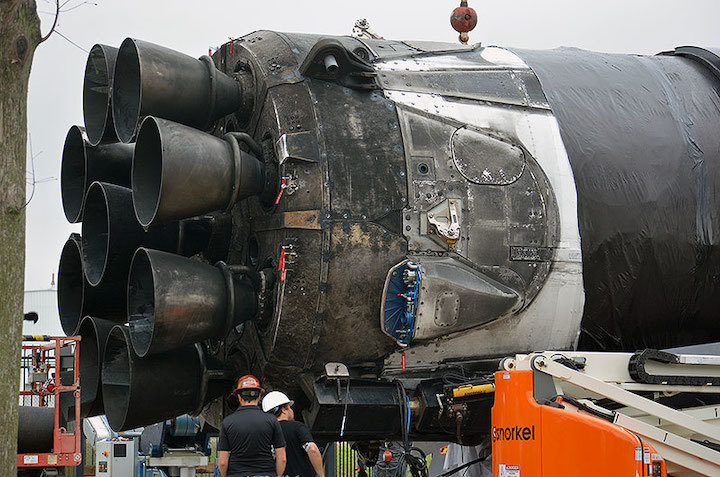