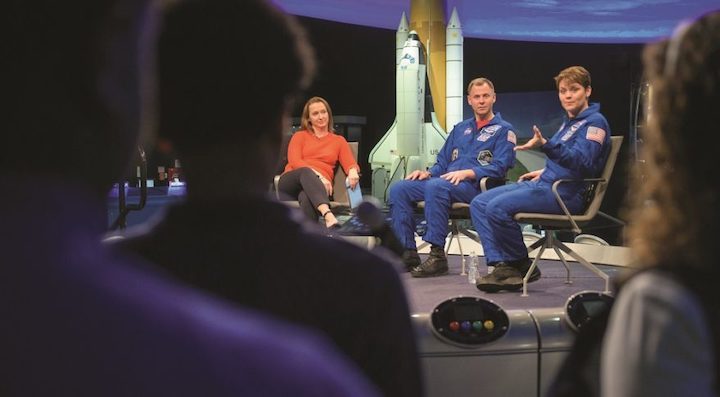 When SpaceX conducted an in-flight abort test of its Crew Dragon spacecraft in January, few people appreciated the importance of such a system more than Nick Hague. In October 2018, he launched on a mission to the International Space Station with Russian cosmonaut Alexey Ovchinin. But, just two minutes after liftoff, their Soyuz rocket malfunctioned, triggering the abort system on their Soyuz MS-10 spacecraft. The spacecraft landed safely about 400 kilometers from the launch site, with Hague and Ovchinin unhurt.

Hague did get to space on his second try, launching on another Soyuz with Ovchinin and NASA’s Christina Koch in March 2019 to the ISS. He spent 203 days in space before returning in October. His time on the station overlapped with another NASA astronaut, Anne McClain, who launched to the station in December 2018, remaining there for 204 days through late June. Her time on the station included being there for the arrival of SpaceX’s Crew Dragon spacecraft on its uncrewed DM-1 test flight.

The two astronauts spoke with SpaceNews during a trip to Washington in mid-January, just before SpaceX’s in-flight abort test, that included both outreach events and meetings with members of Congress. A condensed version of that interview follows.

How quickly have you recovered from spending more than half a year in space?

Hague: It’s pretty amazing how quickly you bounce back. You know, I’m three months after landing and I’m out and running and everything is pretty much back to normal. The countermeasures we have in place on the station — the ARED [Advanced Resistive Exercise Device] resistive weightlifting, the treadmill, the cycle — all of those things do a really great job of keeping us fit and keeping us strong so that when we land we don’t have to worry about that. It’s more just balance and stabilization muscles and getting used to feeling weight again, which is shocking.

And what about getting back to a normal day-to-day life after being focused on working on the space station?

Hague: They ease us into it a little bit. We land and then the scientists want their data, which are little bits and pieces of us. We spend the next several weeks following landing getting scans and giving blood samples and just going through all of those experiments, helping them complete the studies that they started on orbit. It’s a pretty hectic schedule for the first couple of weeks that you’re back before you get a chance to really catch your breath. But part of it all is getting the chance to give your wife and kids a hug. That was super huge for me, and then just getting reintegrated back in the house and starting to live a little bit of a normal life.

McClain: I think one of the things that I noticed when I landed was how many sensory inputs we as humans have every single day. Even just sitting here, it’s how many people are in the room, and there’s emails and phone calls and everything. Station life was complicated. It required your focus. But you had one thing to do at a time and you were very clear on the mission. Our planners in Houston deconflict our schedules for us. Coming back and getting used to how complicated it is to be a human living on Earth was actually kind of interesting.

Have you had the time to reflect on your spaceflights?

McClain: I wanted to go to space since I was three years old, and I spent 39 years wanting to go to space. I had the experience and then I came back. And what I’m left with is this desire, 10 times what I ever felt before in my life, of wanting to go to space. What’s neat about living on the International Space Station is that we do just that: we live on the International Space Station, and it becomes our home. So, where most people see this complicated engineering marvel, which it absolutely is, we also have memories of home. I think we’ll probably spend the rest of our lives reflecting back, and I think the meaning of that flight will change over time. I wish we could take every human up and just show them what Earth look like from space. It’s an amazing perspective and one that we will always have the honor and the burden of trying to articulate and share.

Hague: You live at home with your family and so we’re up there with our family and they’re from all over the world. Something that I’ve taken away from this whole experience is just the power of our common interest in space to unite us.

Did any particular experience stand out from your time in space?

Hague: There’s so many things. There’s “pinch me” moments all the time: just playing with water or playing with your food. It doesn’t have to be the huge experience of doing a spacewalk, although that was something that was very memorable. Both of us got to do our first spacewalk together.

McClain: I don’t know if there’s any one particular moment, although if I have to picture the “ahh” moment, it was the first moments we came out of the hatch on our spacewalk. There was this moment I went out and, about a minute later, Nick came out, so I had this minute of being the only person outside the space station, looking at this amazing view that I could never have even expected. You know, we see the Earth out of the cupola all time, but for some reason when you go outside that station, you look at the Earth, there’s something very different about it when it’s just you in space.

Some astronauts report experiencing the “Overview Effect,” a change in perspective after seeing the Earth from space. Did that happen to you?

Hague: It absolutely changes your perspective to look down at the Earth, and see all its detail, in these most vivid colors in Northern Africa or glaciers in South America. It’s just so vibrant. You can look down and see the Earth as this distinct thing, and at the same time, look up and see the depth of space, and you get a true sense for just this little oasis that we have here that we live on. And for me, it’s this deep sense of ownership: not my personal ownership of the planet, but humanity’s ownership of the planet and that is something that we need to take care of.

McClain: People talk about the Overview Effect and how it changes you. For me personally, my change perspective came from all the people that we worked with. I mean, it’s become such a clichéd phrase to say you put your lives in the hands of someone, but when you are walking to the launchpad in Kazakhstan, you are surrounded by people from multiple different countries. When you walk to that launchpad, you are just a human. And I’m standing next to a Russian and a Canadian. Suddenly, we are just humans, and we’re about to go be ambassadors for this planet in outer space. We put our lives on the line in the hands of people from all over the world. And it’s successful: we’ve pulled off this amazing space station for the last 20 years because there are people all over the world every single day solving problems together. When we can be united not through fear, but through a common desire to explore, that’s powerful.

What was it like getting back into the Soyuz after experiencing the launch abort on your first attempt to get to the station?

Hague: I was confident in the system. Having gone through that, and just seeing the response and the information that came back to us in terms of what happened and getting to the root cause, I was confident to get back into it. But I’d also watched somebody else do it right before me. Right after my abort, two months later, Anne’s getting into a Soyuz rocket and getting ready to launch.

The Soyuz system is a very robust and dependable system. We spend a quarter to 50% of our time during those two years leading up to launch over in Star City, working through all those contingencies: if this breaks, what do you do? And that abort is something that we had simulated. I’m super excited to watch the [SpaceX] launch abort.

You were on the station when the first Crew Dragon spacecraft arrived there last March on the DM-1 uncrewed test flight. What was that experience like?

McClain: We like to say we were the first crew of the Dragon because we got to go inside. The night before DM-1 showed up, we had been on the space station for three months by ourselves. The forward hatch had not been opened since the last space shuttle was there. And we had all this cargo there: it had just become like that area in your house you didn’t go to. David [Saint-Jacques] and I were looking at that and, first of all, we called Houston and said we probably want to move that. They said, “Oh, yeah.”

We cleaned it up and then we’re just looking at that. It was so quiet. And we’re thinking, on the front of the space station is about to be our next major leap in spaceflight, this next era. So it was very special to watch DM-1. And it had that new spaceship smell.

Hague: Who doesn’t want to go to the moon, right? But one of the key things is the magnitude of the program and how it’s all interconnected. We’ve got 20 years of people living on the station helping us learn about how to live in space. During our time up there, we’re helping shake out some of the hardware that’s going to be used to get us back to the moon. You see every one of the things that you’re doing contributing to this larger program that’s pushing us forward.

McClain: The Artemis program is super-exciting. I would love to get to be one of the people to put boots on the moon. I would take a space station mission again. As Sheryl Sandberg says, if somebody offers you a seat on a rocket, you don’t ask what seat. You just get on.