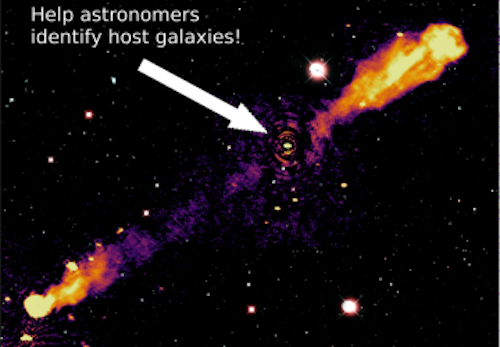 Scientists are asking for the public’s help to find the origin of hundreds of thousands of galaxies that have been discovered by the largest radio telescope ever built: LOFAR. Where do these mysterious objects that extend for thousands of light-years come from? A new citizen science project, LOFAR Radio Galaxy Zoo, gives anyone with a computer the exciting possibility to join the quest to find out where the black holes at the centre of these galaxies are located.

Astronomers use radio telescopes to make images of the radio sky, much like optical telescopes like the Hubble space telescope make maps of stars and galaxies. The difference is that the images made with a radio telescope show a sky that is very different from the sky that an optical telescope sees. In the radio sky, stars and galaxies are not directly seen but instead an abundance of complex structures linked to massive black holes at the centres of galaxies are detected. Most dust and gas surrounding a supermassive black hole gets consumed by the black hole, but part of the material will escape and gets ejected into deep space. This material forms large plumes of extremely hot gas, it is this gas that forms large structures that is observed by radio telescopes.

The Low Frequency Array (LOFAR) telescope, operated by the Netherlands Institute for Radio Astronomy (ASTRON), is continuing its huge survey of the radio sky and 4 million radio sources have now been discovered. A few hundred thousand of these have very complicated structures. So complicated that it is difficult to determine which galaxies belong to which radio source, or in other words, which black hole belongs to which galaxy?

While the international LOFAR team consists of more than 200 astronomers from 18 countries, it is simply too small to take on this daunting task of identifying which radio structures belong to which host galaxy. Therefore, LOFAR astronomers are asking the public to help. In the context of the citizen science project ‘LOFAR Radio Galaxy Zoo’, the public is asked to look at images from LOFAR and images of galaxies and then associate radio sources with galaxies. 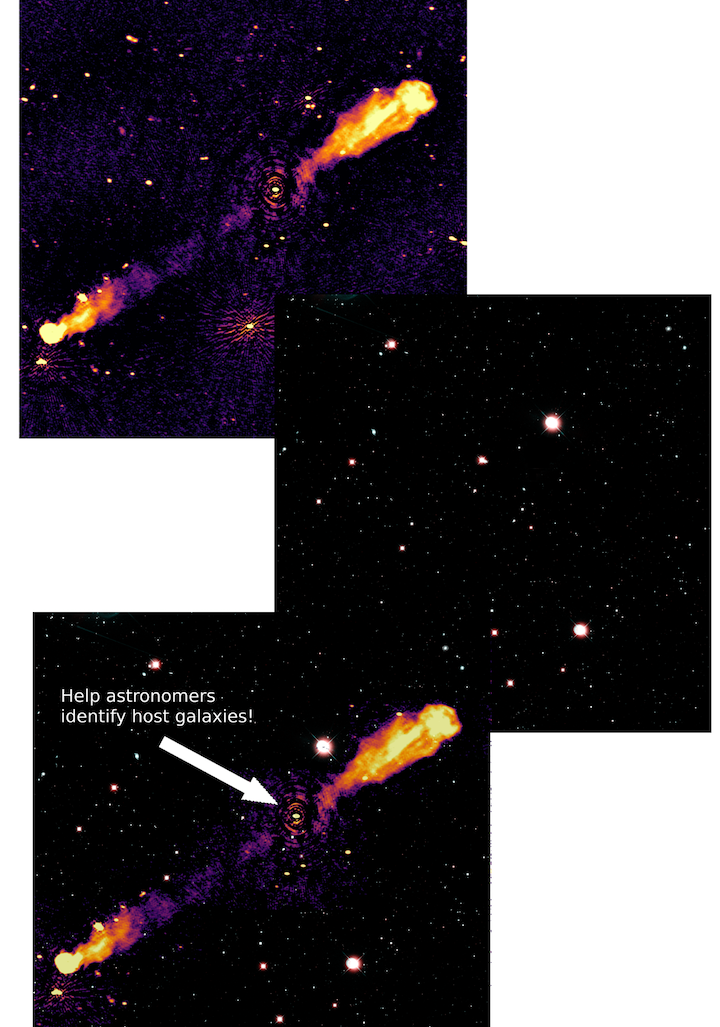 “LOFAR’s new survey has revealed millions of previously undetected radio sources. With the help of the public we can investigate the nature of these sources: Where are their black holes? In what kind of galaxies are the black holes located?’’ says Huub Röttgering from Leiden University (The Netherlands).

Tim Shimwell, ASTRON and Leiden University, explains why this is significant: “Your task is to match the radio sources with the right galaxy. This will help researchers understand how radio sources are formed, how black holes evolve, and how vast quantities of material can be ejected into deep space with such unprecedented amounts of energy”, he says.

Radio Galaxy Zoo: LOFAR is part of the Zooniverse project, the world’s largest and most popular platform for people-powered research. This research is made possible by volunteers — more than a million people around the world who come together to assist professional researchers.

More images can be found here

The tutorial video can be viewed here