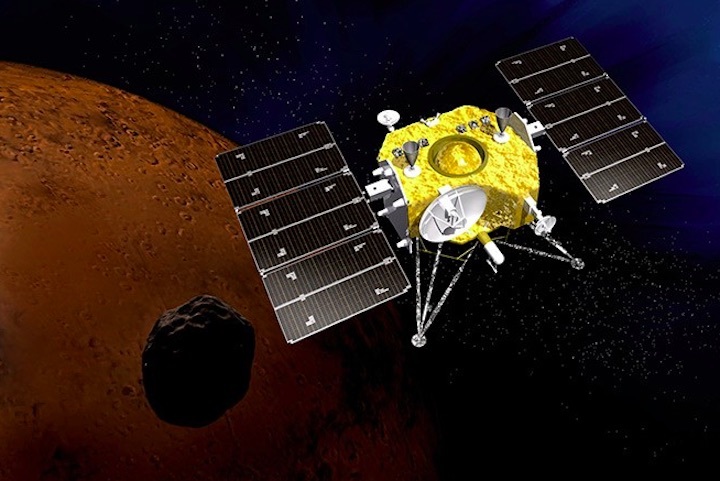 No country has landed a probe on a Martian moon, but a new Japan space mission aims to make that giant leap for mankind in 2024.

The Japan Aerospace Exploration Agency (JAXA) is now setting its sights on Phobos, the larger of Mars’ two moons, after it twice successfully sent a probe to a distant asteroid.

JAXA officials submitted a plan to the science ministry on Feb. 19 that calls for the probe to attempt a landing on Phobos to collect rocks and sand.

The probe will use similar technology installed on the Hayabusa 2 probe, which allowed JAXA to collect and retrieve samples from the asteroid Ryugu in 2019.

Hayabusa 2 is scheduled to release a capsule containing those samples above Australia at the end of this year.

A new H-3 rocket will be used to launch the exploration plan dubbed MMX in September 2024.

If the project progresses as planned, the probe will enter Martian orbit in the summer of the following year. The probe would be used over the next three years to study Phobos and its surroundings and attempt at least one landing to collect rock and sand samples.

It would then return to Earth in September 2029.

Phobos has a diameter of about 23 kilometers and gravity on the moon is about one-1,000th of that on Earth. The low level of gravity is similar to the asteroids to which both Hayabusa probes were sent in the past and that convinced JAXA officials that the technology used in those probes could be adapted for the Martian moon.

JAXA officials at one time considered sending a probe to Mars' smaller moon, Deimos, which has a diameter of about 12 km.

But Phobos was chosen as the object of the probe because of its proximity to Mars, which likely means Phobos has many particles that originated on Mars.

Phobos was also chosen because there is a great deal more data about possible landing sites, a result of the many observations made from Earth in the past.

The downside of going to Phobos is that the probe needs more fuel to approach it.

Japan decided in 2019 to participate in a U.S.-led plan for moon exploration. The plan involves constructing a space station that orbits the moon, with a future goal being to eventually launch a Mars explorer.

The MMX plan could provide valuable information for such future exploration of Mars.

The total cost of developing the MMX will be 46.4 billion yen ($417 million), close to double the 28.9 billion yen spent on the Hayabusa 2 probe project.

Quelle: The Asahi Shimbun
+++
Japan space agency to send next probe to Phobos, aims to deepen understanding of Mars

TOKYO -- The Japan Aerospace Exploration Agency (JAXA) has decided that the next target for its galactic sample collection projects will be Phobos, one of Mars' two small natural satellites.

The project, which will follow on from the Hayabusa2 probe currently returning to Earth with samples from the asteroid Ryugu, is hoped to become the first ever successful trip to and from Mars by a probe. JAXA intends to launch it in 2024, and have it return in 2029.

It's being called the Martian Moons eXploration (MMX) project, and is a "sample return" mission in which material from the celestial body will be collected and brought to Earth. Following on from the Hayabusa and Hayabusa2 missions, it will inherit the technology refined over the agency's previous endeavors.

Mars is orbited by two small natural satellites: Phobos, which measures around 23 kilometers in diameter, and Deimos, which is some 12 kilometers. The plan was originally to land on either of the celestial objects, but until now it hadn't been decided precisely which of them the probe would aim for.

Now, the target is for the probe to land on Phobos for a few hours, and collect 10 grams or more of the sand believed to be covering its surface.

Phobos is closer to the surface of Mars than Deimos, and because the planet's gravitational pull has a greater influence on it, more fuel will be required to land the probe. But it's expected that Phobos will have a wealth of materials that have landed on it from Mars, and it's hoped that obtaining some of it will further our understanding of the planet.

There are two theories as to why objects like Phobos came to orbit planets: one is the capture theory positing that wandering asteroids have been pulled by the gravitational force of Mars. The other is the impact hypothesis, which suggests that Mars collided with another celestial object, thereby creating separate bodies.

One of MMX's major goals is to find scientific evidence supporting one of the two theories by analyzing the material brought back, and through up-close observation of Phobos.

Additionally, the mission intends to use a high-resolution camera to photograph Deimos, as well as using other means to observe the natural satellite from above.

Development of the three-stage probe is underway at a total cost of 46.4 billion yen ($421.6 million). In 2011, Russia launched a probe to go to Phobos, but the mission ended in failure.

The Japan Aerospace Exploration Agency, or JAXA, has announced plans to send a probe to one of Mars' moons and bring back samples from its surface.

A science ministry panel of experts approved the plan on Wednesday.

Under the JAXA-led project called Martian Moons eXploration, researchers will launch the probe to Phobos in 2024 and bring back samples in 2029. They say the mission is the first of its kind in the world.

Phobos is about 23 kilometers in diameter and orbits around 9,000 kilometers away from Mars.

With the project, researchers hope to shed light on the origin of the Martian moons and the formation process of planets in the solar system.

A JAXA official said objects found on Phobos should include many that originated on Mars.

Project manager Yasuhiro Kawakatsu said he hopes to successfully carry out the project and shed light on the origin of the solar system.

Japan’s space agency has approved a robotic mission to retrieve a sample from the Martian moon Phobos for return to Earth to begin full development for a planned launch in 2024, officials said Thursday.

The Martian Moon eXploration, or MMX, spacecraft will attempt to return the first specimens from Phobos for analysis in laboratories on Earth, where scientists hope to trace the origins of the Martian moons to determine whether they were asteroids captured by Mars, or if they formed out of rocky debris generated from an ancient impact on Mars.

The Japan Aerospace Exploration Agency and other Japanese government officials officially approved the MMX project to proceed into development Wednesday, according to a post on JAXA’s website.

JAXA began studying the feasibility of a sample return mission to Phobos in 2015, and Japanese officials received promises of contributions to the MMX mission from the United States and Europe.

The MMX mission’s transition from a “pre-project” phase to an official JAXA project Wednesday came after agency leaders considered the probe’s scientific goals, success criteria, implementation, financial plans, schedule, and risks and countermeasures, according to JAXA.

The MMX spacecraft is scheduled for launch in September 2024 aboard a Japanese H3 rocket. The robot explorer will arrive in orbit around Mars in August 2025 and land on Phobos, a moon with an average diameter of about 14 miles, or 22 kilometers.

The probe will land on Phobos and snare at least 10 grams, or about a third of an ounce, of material from the moon’s surface using a coring collection system before taking off again. MMX will also release a German-French rover to explore the terrain and chemical composition of Phobos for roughly three months.

MMX will perform several close flybys of Deimos, the smaller of Mars’s two moons, before departing the orbit of Mars in 2028 on a course back to Earth, where a sample return carrier will re-enter the atmosphere and land containing specimens gathered at Phobos.

The MMX spacecraft’s return to Earth in 2029 would complete the first round-trip voyage to Mars and back, JAXA said.

The MMX spacecraft will consist of three main elements: A propulsion module, a landing module with four legs and science instruments, and a sample carrier to return rocks from Phobos back to Earth.

The mission will carry a NASA-funded instrument — named MEGANE, meaning “eyeglasses” in Japanese — to measure the elemental composition of Phobos by detecting neutrons and gamma-rays emitted from the small moon.

French scientists committed to build an infrared camera and spectrometer named MacrOmega to fly on the MMX spacecraft. Like MEGANE, the French instrument will help scientists locate the best place to collect a sample.

In 2018, the German and French space agencies agreed with JAXA to provide a small rover for the MMX mission based on the MASCOT robot deployed on the surface of asteroid Ryugu by Japan’s Hayabusa 2 spacecraft.

The scientific objectives of the MMX mission are aimed at studying how water was transported between bodies in the early solar system, including to Earth. Scientists think the solar systems’s inner planets were too close to the hot sun during the solar system’s formation to have retained water on their surfaces.

Therefore, scientists theorize that water was delivered to planets like Earth by comets and asteroids. Mars is the outermost of the solar system’s rocky planets, and could have been a “gateway” for water arrival in the inner solar system, according to JAXA.

“Phobos and Deimos resemble asteroids and may have been captured by Mars’s gravity as they were scattered inwards from the asteroid belt,” JAXA wrote in a press release Thursday. “If so, the pair would be capsules for water transport through the Mars gateway to the terrestrial planets.

“Alternatively, the moons may have formed during a giant impact with Mars,” JAXA continued. “This would make the moons capsules of shards of the early Martian environment, revealing how water came and went on the Red Planet.

“A main mission goal for MMX is to decipher the origin of the moons by remote examination and returning a sample for compositional analysis,” JAXA said. “Both possible origins will provide clues as to how water is delivered to inner planets.”

The Hayabusa spacecraft launched in 2003 and collected microscopic samples from asteroid Itokawa in 2005. The probe returned the material to Earth in 2010, overcoming multiple technical malfunctions that threatened to prematurely end the mission.

Hayabusa 2 launched in 2014 and collected samples from Ryugu — a carbon-rich asteroid — during two touch-and-go landings last year. The spacecraft has departed Ryugu and is on track to return the samples to Earth late this year.