The payload integration process has begun for Arianespace’s upcoming Ariane 5 mission, which will place the JCSAT-17 and GEO-KOMPSAT-2B satellites in geostationary transfer orbit (GTO) during a nighttime launch from the Spaceport in French Guiana on February 18.

GEO-KOMPSAT-2B underwent its pre-launch fueling process in Spaceport’s S5 payload preparation facility, and has been transferred to the Ariane 5’s Final Assembly Building for integration on the launcher. 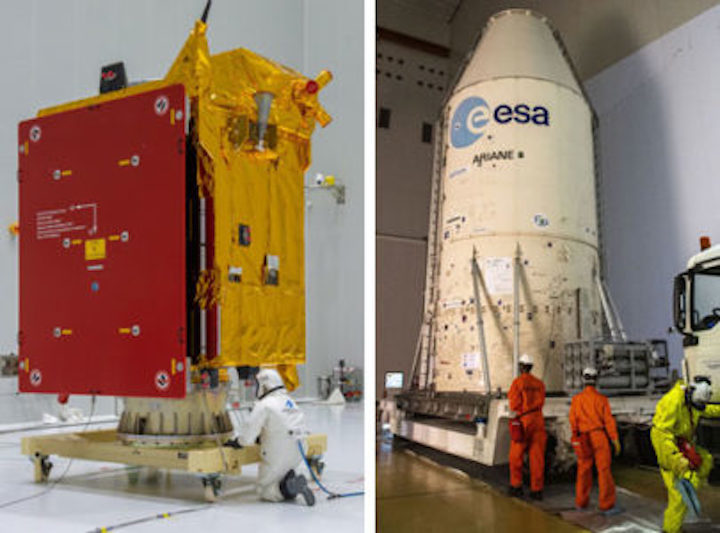 Produced by the Korea Aerospace Research Institute (KARI), GEO-KOMPSAT-2B will be installed in Ariane 5’s lower payload position, to be deployed as the second passenger during this mission.

After arriving at its operational slot in geostationary orbit, the spacecraft will be used primarily for monitoring the oceans and the Earth’s environment.

The mission’s other passenger, JCSAT-17, will ride in the upper position on Ariane 5. Built by Lockheed Martin for operation by Japan’s SKY Perfect JSAT Corporation, it will deliver telecommunications services across a coverage zone that includes Japan and areas extending 200 nautical miles from the coast.

The heavy-lift Ariane 5 launch with JCSAT-17 and GEO-KOMPSAT-2B is designated Flight VA252 in Arianespace’s numbering system, signifying the 252nd mission with an Ariane-series launcher. It will be Arianespace’s second Ariane 5 flight in 2020 from the Spaceport, following the January 16 success that delivered the EUTELSAT KONNECT and GSAT-30 satellites to GTO.

Arianespace’s fast-paced launch cadence for 2020 also included a medium-lift mission with Soyuz from Baikonur Cosmodrome in Kazakhstan, which was conducted with its Starsem affiliate on February 7 to deploy 34 satellites for OneWeb’s next-generation constellation. 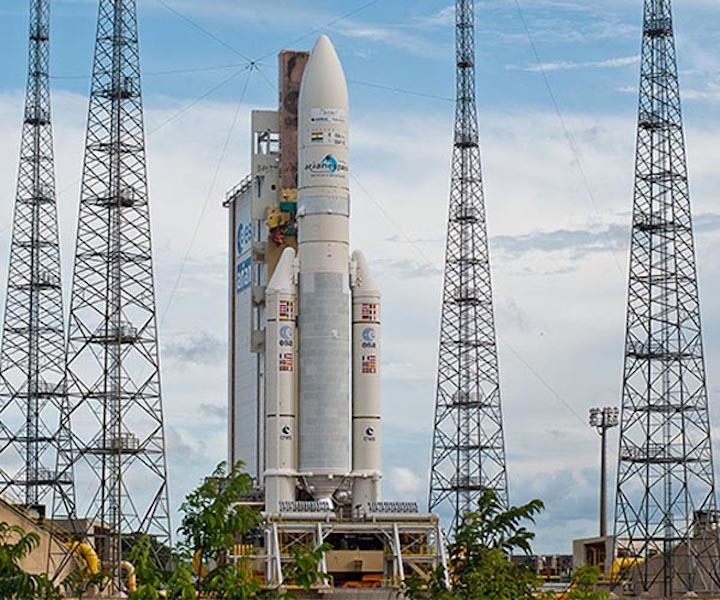 With this mission dedicated to space applications for telecommunications and environment monitoring, Arianespace once again contributes to the improvement of life on Earth.

Flight VA252 will be performed from Ariane Launch Complex No. 3 (ELA 3) in Kourou, French Guiana.

The Launch Readiness Review (LRR) will take place on Friday, February 14, 2020 in Kourou to authorize the start of operations for the final countdown.

JCSAT-17 will be the 21st SKY Perfect JSAT satellite to be launched by Arianespace. This geostationary communications satellite will deliver flexible, high-bandwidth communications to users in Japan and the surrounding region.

JCSAT-17 will also be the 32nd satellite launched by Arianespace for Japan.

Built by Lockheed Martin Space, JCSAT-17 will be the 47th satellite made by this manufacturer to be launched by Arianespace.

GEO-KOMPSAT-2B will be KARI's second satellite as a manufacturer - and its third as a client - to be launched by Arianespace.

The predecessor satellite, GEO-KOMPSAT-2A, was successfully launched by Arianespace in December 2018.

GEO-KOMPSAT-2B will be the eighth satellite launched by Arianespace for South Korea. 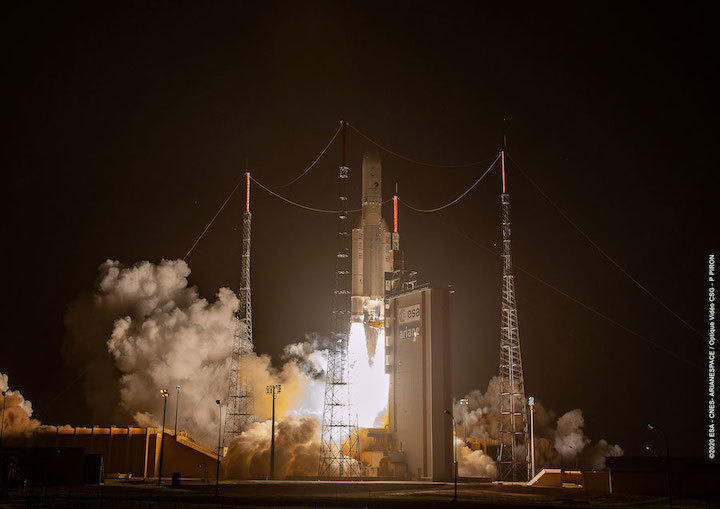 The heavyweight duo rocketed away from a launch pad in French Guiana at 5:18 p.m. EST (2218 GMT; 7:18 p.m. French Guiana time) Tuesday after a smooth countdown, beginning Arianespace’s third mission of the year.

Powered by two solid rocket boosters and a hydrogen-fueled Vulcain 2 main engine, the Ariane 5 turned to the east from the Guiana Space Center on the northern shoreline of South America. The Ariane 5 generated some 2.9 million pounds of thrust and exceeded the speed of sound in less than a minute.

The two powerful side-mounted boosters jettisoned two-and-a-half minutes into the flight, and the Ariane 5’s Swiss-made payload shroud separated nearly a minute later. The Ariane 5’s Vulcain 2 main engine shut down nearly nine minutes after liftoff, and the core stage jettisoned to fall into the Gulf of Guinea off the west coast of Africa.

A hydrogen-fueled HM7B engine ignited on the Ariane 5’s second stage — flying with slightly larger propellant tanks to improve lift performance — and fired more than 16 minutes to place the JCSAT 17 communications satellite and the GEO-Kompsat 2B environmental observatory into an elliptical, or egg-shaped, transfer orbit ranging between 155 miles (250 kilometers) and 22,236 miles (35,786 kilometers).

The Ariane 5 deployed the JCSAT 17 satellite — the larger of the mission’s two payloads — nearly 28 minutes into the mission. After jettisoning a black composite adapter structure, the Ariane 5 released the GEO-Kompsat 2B spacecraft at Plus+31 minutes.

Arianespace, the French launch service provider, confirmed the Ariane 5 placed its payloads into an on-target orbit.

“On behalf of Arianespace and our teams, I am thrilled to announce that JCSAT 17 and GEO-Kompsat 2B have been injected as planned into their targeted orbit,” said Luce Fabreguettes, Arianespace’s executive vice president of missions, operations and purchasing. “For the second Ariane launch of the year, our heavyweight vehicle has performed flawlessly once again.”

After extending their power-generation solar arrays, the JCSAT 17 and GEO-Kompsat 2B satellites will use their own thrusters to reshape their orbits to reach a circular geostationary perch more than 22,000 miles (nearly 36,000 kilometers) above Earth. The maneuvers will also reduce the satellites’ orbital inclination from 6 degrees to 0 degrees to take position over the equator.

The JCSAT 17 spacecraft was built by Lockheed Martin near Denver and weighed 12,912 pounds (5,857 kilograms) fully fueled for launch.

JCSAT 17 is owned by Sky Perfect JSAT, a Tokyo-based company. Once in orbit, the new satellite will unfurl a 59-foot-diameter (18-meter) S-band mesh communications antenna made by L3Harris Technologies, formerly known as Harris Corp., of Melbourne, Florida.

“I just wan to say say how proud we are at Lockheed Martin to be able to deliver one of the largest and most technologically advanced satellites to our customer,” said Guy Beutelschies, vice president of communication satellite solutions at Lockheed Martin.

“We look forward to going through initial acquisition, deploying our solar arrays, moving our satellite out into its orbital position, deploying the very large 18-meter Harris reflector, and then doing all our payload checkout so that we may turn the satellite over JSAT, so that it may serve you and your customers and the people of Japan for many, many, many years to come,” Beutelschies said in remarks after Tuesday’s launch.

JCSAT 17 carries S-band, C-band and Ku-band transponders to provide data connectivity and broadcast services over Japan and other parts of the Asia-Pacific region.

The S-band and C-band payloads on JCSAT 17 will be used by NTT Docomo, a Japanese mobile phone company, to provide mobile connectivity across Japan and surrounding regions, according to Sky Perfect JSAT.

“It will take a couple of months —  maybe a month — for us to make the satellite in service,” said Eiichi Yonekura, president and CEO of Sky Perfect JSAT. “So we have to continue concentrating on taking the necessary further procedures until the mission is completed.

“Having said that, I’d like to celebrate together with you tonight our successful launch,” Yonekura said. “Including this JCSAT 17 (satellite), we are going to have to have 20 satellites in operation.”

JCSAT 17 will operate from a position along the equator at 136 degrees east longitude. The spacecraft is designed to operate at least 15 years, but it carries enough propellant to function more than 21 years, according to Lockheed Martin.

Based on the LM 2100 satellite bus, JCSAT 17 carries solar arrays designed to roll out like a window shade. Solar panels on satellites are traditionally designed to unfurl like an accordion.

The new solar array design is lighter and takes up less volume, while capable of generating more power for the satellite once in orbit. The solar arrays on JCSAT 17 will produce more than 10 kilowatts of power, including 6.5 kilowatts dedicated to the satellite’s communications payload.

The 7,449-pound (3,379-kilogram) GEO-Kompsat 2B spacecraft, built and owned by the Korea Aerospace Research Institute, or KARI, carries instruments to monitor the environment and oceans across the Asia-Pacific region.

The spacecraft hosts two sensors: An ocean color imager made by Airbus in Europe and a spectrometer from Ball Aerospace in Colorado. The satellite platform itself was manufactured in South Korea.

The GEO-Kompsat 2B satellite is designed to operate at least 10 years, collecting information on marine environments around the Korean Peninsula, fishery ecosystems, aerosol transport in the atmosphere, and air quality over Korea.

Byung-Seon Jeong, South Korea’s vice minister of science and information and communication technology, said the GEO-Kompsat 2B mission has been in development since 2011.

“We believe that GEO-Kompsat 2B will be an invaluable asset serving various environmental issues of humankind, especially addressing particulate matter in East Asia,” he said. “The air and ocean environmental data from GEO-Kompsat 2B is expected to significantly help many people (with) breathing concerns and minimize the damage from marine disasters.

“The government and related agencies are fully prepared to utilize the data from the satellite so that people can actually feel tangible progress,” he said. That would be the best way to make a return from all the support and trust we received from the people of our country. I’m very pleased that the successful launch of GEO-Kompsat 2B has proved Korea as one of the top space technology countries, and furthers the confidence and pride of our people.”

The Geostationary Environment Monitoring Spectrometer instrument built by Ball Aerospace is billed as the first air quality sensor in geostationary orbit. The spectrometer will take hourly measurements of air pollution, including ozone and nitrogen dioxide, to improve early warnings for potentially dangerous pollution events, according to Ball Aerospace.

“GEMS is a result of more than 30 years of innovation in advanced spectrometers at Ball Aerospace,” said Makenzie Lystrup, vice president and general manager of civil space programs at Ball Aerospace. “Data from GEMS will enable KARI’s mission to assess and forecast air pollution by identifying sources and distribution of pollutants in the atmosphere.”