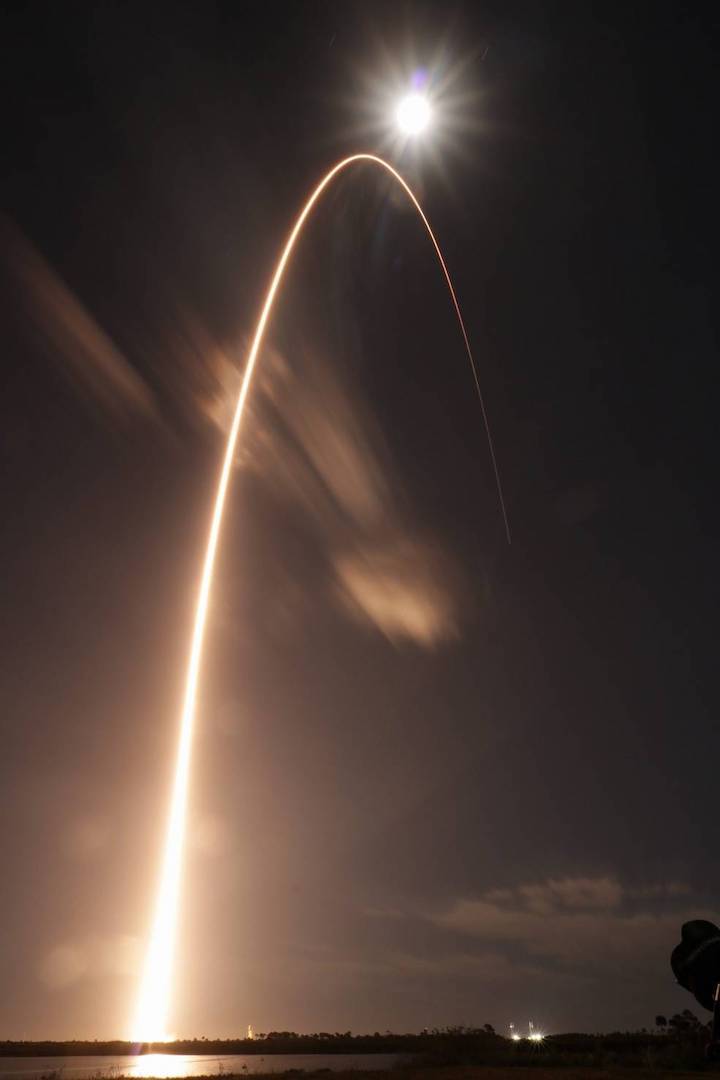 At 12:24 a.m. Monday, mission controllers at the European Space Operations Centre in Darmstadt, Germany, received a signal from the spacecraft indicating that its solar panels had successfully deployed.

In the first two days after launch, Solar Orbiter will deploy its instrument boom and several antennas that will communicate with Earth and gather scientific data. Solar Orbiter is on a unique trajectory that will allow its comprehensive set of instruments to provide humanity with the first-ever images of the Sun's poles. This trajectory includes 22 close approaches to the Sun, bringing the spacecraft within the orbit of Mercury to study the Sun and its influence on space.

“As humans, we have always been familiar with the importance of the Sun to life on Earth, observing it and investigating how it works in detail, but we have also long known it has the potential to disrupt everyday life should we be in the firing line of a powerful solar storm,” said Günther Hasinger, ESA director of Science. “By the end of our Solar Orbiter mission, we will know more about the hidden force responsible for the Sun’s changing behavior and its influence on our home planet than ever before."

Solar Orbiter will spend about three months in its commissioning phase, during which the mission team will run checks on the spacecraft's 10 scientific instruments to ensure they are working properly. It will take Solar Orbiter about two years to reach its primary science orbit.

Solar Orbiter combines two main modes of study. In-situ instruments will measure the environment around the spacecraft, detecting such things as electric and magnetic fields and passing particles and waves. The remote-sensing instruments will image the Sun from afar, along with its atmosphere and its outflow of material, collecting data that will help scientists understand the Sun's inner workings.

During the mission's cruise phase, which lasts until November 2021, the spacecraft's in-situ instruments will gather scientific data about the environment around the spacecraft, while the remote-sensing telescopes will focus on calibration to prepare for science operations near the Sun. The cruise phase includes three gravity assists that Solar Orbiter will use to draw its orbit closer to the Sun: two past Venus in December 2020 and August 2021, and one past Earth in November 2021.

Solar Orbiter’s unique orbit will bring the spacecraft out of the plane that roughly aligns with the Sun's equator where Earth and the other planets orbit. Spacecraft launched from Earth naturally stay in this plane, which means that telescopes on Earth and telescopes on satellites have limited views of the Sun's north and south poles.

A previous ESA-NASA mission, Ulysses, launched in 1990, achieved an inclined orbit giving scientists their first measurements of the space around the Sun in this critical region. Unlike Ulysses, Solar Orbiter carries cameras that will provide the first-ever images of the Sun's poles. This vital information will help scientists fill in the gaps in models of the Sun's magnetic field, which drives the Sun's activity.

"Solar Orbiter is going to do amazing things. Combined with the other recently launched NASA missions to study the Sun, we are gaining unprecedented new knowledge about our star," said Thomas Zurbuchen, NASA’s associate administrator for Science at the agency’s headquarters in Washington. “Together with our European partners, we’re entering a new era of heliophysics that will transform the study of the Sun and help make astronauts safer as they travel on Artemis program missions to the Moon."

ESA's European Space Research and Technology Centre in the Netherlands manages the development effort. The European Space Operations Center in Germany will operate Solar Orbiter after launch. Solar Orbiter was built by Airbus Defense and Space. The spacecraft contains 10 instruments. Nine were provided by ESA member states and ESA. NASA provided one instrument, the Solar Orbiter Heliospheric Imager (SoloHI), and an additional sensor, the Heavy Ion Sensor, which is part of the Solar Wind Analyzer instrument suite.

Solar Orbiter complements a fleet of NASA Heliophysics spacecraft observing the star we live with and its effects on the space we travel through.

After Solar Orbiter, ESA’s next mission observing the Sun will not be one spacecraft but two: the double satellites making up Proba-3 will fly in formation to cast an artificial solar eclipse, opening up the clearest view yet of the Sun’s faint atmosphere – probing the mysteries of its million degree heat and magnetic eruptions.

Aiming for launch in mid-2022, Proba-3 comprises two small metre-scale satellites to be placed together in Earth orbit. They will line up to cast a precise shadow across space to block out the solar disc for six hours at a time during each 20 hour orbit, giving researchers a sustained view of the Sun’s immediate vicinity.

“To achieve this the satellite pair must achieve an unprecedented precision of flight control,” explains Proba-3 system manager Damien Galano. “They must align along an average distance of 144 m apart, maintained to an accuracy of a few millimetres. By achieving such precision formation flying techniques, in future multiple small satellites could perform equivalent tasks to individual giant spacecraft.”

Proba-3’s focus will be the Sun’s faint atmosphere, or corona, which extends millions of kilometres from the solar surface and is the source of the solar wind and coronal mass ejections – huge magnetic eruptions that can affect space weather all the way to Earth itself.

The corona is also the basis of a long-standing scientific mystery: while the Sun’s surface is a comparatively cool 6000 °C, the corona rises to a sizzling million degrees or more – in apparent defiance to the laws of thermodynamics.

But the dazzling face of the Sun usually masks the faint, wispy corona, like a blazing bonfire next to a firefly.

“Up until now, the best way to see the corona is briefly during a solar eclipse on Earth, or else using a ‘coronagraph’ instrument incorporating one or more blocking – or ‘occulting’ – discs to blot out the Sun’s disc,” says solar scientist Andrei Zhukov of the Royal Observatory of Belgium (ROB).

He is the principal investigator of Proba-3’s main ASPIICS (Association of Spacecraft for Polarimetric and Imaging Investigation of the Corona of the Sun) telescope, while also serving as ROB’s project scientist of Solar Orbiter’s Extreme Ultraviolet Imager (EUI).

“But sunlight still bends around such blocking discs– known as ‘diffraction’ – which can leads to a high level of straylight within an instrument, degrading the resulting image,” adds Andrei.

“The idea behind Proba-3 is to cut that straylight fivefold and in the same time observe very close to the edge of the Sun, by flying the external blocking disc far away from the rest of the telescope, aboard a separate satellite.

“I’m looking forward to the time when Proba-3 is operating along with other Sun-watching missions. While Solar Orbiter’s EUI observes changes on the solar surface in extreme ultraviolet, Proba-3 will clearly show associated features within the inner corona in visible light, revealing interactions between the Sun and its surroundings.” 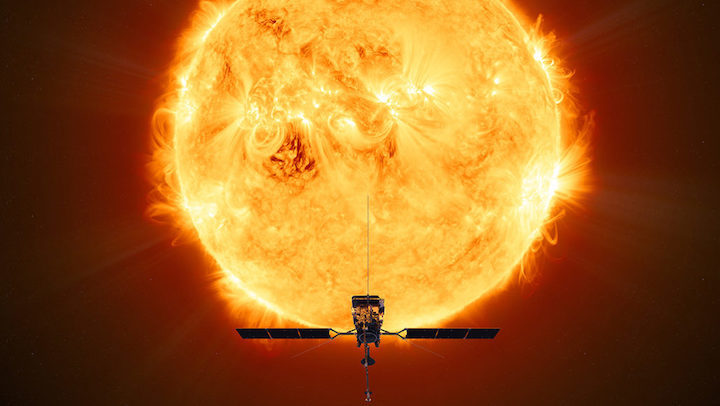 A new sungazing spacecraft has launched on a mission to chart the sun’s unexplored polar regions and to understand how our star creates and controls the vast bubble of plasma that envelops the solar system.

At 11:03 pm ET on February 9, the European Space Agency’s Solar Orbiterrocketed away from Cape Canaveral, Fla. The spacecraft now begins a nearly two-year convoluted journey — getting two gravity assists from Venus and one from Earth — to an orbit that will repeatedly take it a bit closer to the sun than Mercury gets.

Slated to study the sun for at least four years starting in November 2021, Solar Orbiter is going where few spacecraft have gone. The probe will soar above and below the orbits of the planets to get a peek at the sun’s north and south poles — a region no one has yet seen. One of the mission’s many goals is to see how the poles change when the sun’s magnetic field flips at the height of the next solar cycle, sometime in the middle of this decade.

The probe carries a suite of 10 science instruments, including cameras and devices to measure the sun’s magnetic field and the solar wind, a stream of plasma that flows from the sun and eventually peters out at the solar system’s border with interstellar space (SN: 11/4/19). At Solar Orbiter’s closest approach to the sun, about 42 million kilometers above the surface, the sun will appear 13 times as bright as it does from Earth, heating the spacecraft to nearly 500° Celsius. To view the sun safely, most of its instruments will peek through protective windows tucked behind sliding doors in the spacecraft’s heat shield.

Solar Orbiter is part of a trifecta of new missions dedicated to unraveling the sun’s mysteries. NASA’s Parker Solar Probe is already spiraling closer and closer to the sun (SN: 12/4/19). Parker won’t ever view the sun directly or explore the poles, but it will get much closer than Solar Orbiter and directly measure the solar wind from just 6 million kilometers above the sun’s surface.

First measurements by a Solar Orbiter science instrument reached the ground on Thursday 13 February providing a confirmation to the international science teams that the magnetometer on board is in good health following a successful deployment of the spacecraft’s instrument boom.

Solar Orbiter, ESA’s new Sun-exploring spacecraft, launched on Monday 10 February. It carries ten scientific instruments, four of which measure properties of the environment around the spacecraft, especially electromagnetic characteristics of the solar wind, the stream of charged particles flowing from the Sun. Three of these ‘in situ’ instruments have sensors located on the 4.4 m-long boom.

“We measure magnetic fields thousands of times smaller than those we are familiar with on Earth,” says Tim Horbury of Imperial College London, Principal Investigator for the Magnetometer instrument (MAG). “Even currents in electrical wires make magnetic fields far larger than what we need to measure. That’s why our sensors are on a boom, to keep them away from all the electrical activity inside the spacecraft.”

Ground controllers at the European Space Operations Centre in Darmstadt, Germany, switched on the magnetometer’s two sensors (one near the end of the boom and the other close to the spacecraft) about 21 hours after liftoff. The instrument recorded data before, during and after the boom’s deployment, allowing the scientists to understand the influence of the spacecraft on measurements in the space environment.

As the titanium/carbon-fibre boom stretched out over an overall 30-minute period on Wednesday, almost three days after liftoff, the scientists could observe the level of the magnetic field decrease by about one order of magnitude. While at the beginning they saw mostly the magnetic field of the spacecraft, at the end of the procedure, they got the first glimpse of the significantly weaker magnetic field in the surrounding environment.

“Measuring before, during, and after the boom deployment helps us to identify and characterise signals that are not linked to the solar wind, such as perturbations coming from the spacecraft platform and other instruments,” says Matthieu Kretzschmar, of Laboratoire de Physique et Chimie de l'Environnement et de l'Espace in Orleans, France, Lead Co-investigator behind another sensor located on the boom, the high frequency magnetometer of the Radio and Plasma Waves instrument (RPW) instrument.

“The spacecraft underwent extensive testing on ground to measure its magnetic properties in a special simulation facility, but we couldn’t fully test this aspect until now, in space, because the test equipment usually prevents us from reaching the needed very low level of magnetic field fluctuations,” he adds.

Next, the instruments will have to be calibrated before true science can begin.