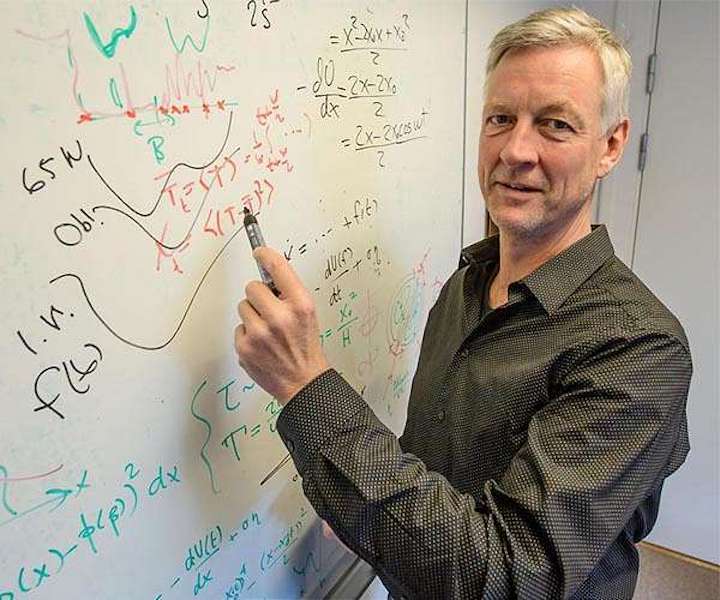 Peter Ditlevsen from the Niels Bohr Institute at the University of Copenhagen is the leader of the TIPES project, which, with the help of climate models, will predict sudden and violent changes in the climate -- the so-called 'tipping points'.

When we predict future climate, it is important to understand the climate of the past. We do. Mostly. Some details are still debatable.

An example of that are the periodicities of ice ages - that is, how ice ages come and go. This is described in a theory developed by amongst others the astronomer Milankovitch in the 1920ies. The theory describes mathematically how incoming radiation from the sun varies over time because the orbit of the Earth around the sun is elliptical and our dear planet wobbles like a top.

All in all these small differences lead to continuous changes in the amount of light and heat that reaches the poles in a 40.000 year cycle and thus forces the climate in and out of ice ages and interglacials.

Ice ages hard to predict
The theory is good, but it doesn't explain everything. The periodicity of ice ages has not been as precise as the theory would indicate. Why is that? Is it because of noise in the system - that is coincidences, that overshadow the general mechanism, or are the inconsistencies due to problems with the model? The question has long been debated.

Now climate scientist from the TiPES project, Peter Ditlevsen from Physics of Ice, Climate and Earth at the Niels Bohr Institute, University of Copenhagen and colleagues Takahito Mitsui from the University of Tokyo and Michel Crucifix from UCLouvan in Belgium argue that coincidences play a large part.

In their paper, "Crossover and peaks in the Pleistocene climate spectrum; understanding from simple ice age models", published in the journal Climate Dynamics, they document that the climate system is more chaotic than the model indicates. A myriad of coincidences seem to displace the ice ages from the predictions of the theory.

The influence of coincidence
In other words - the theory is good, but a large amount of noise can partly overrule the effect of the astronomical variations.

Some of these changes come and go in short time spans others fluctuate over longer periods. That is, some have a high frequency, others a lower frequency. Together they explain the variation, the climate has endured over millions of years.

In the new analysis the climate spectrum is compared to expectations from different models of ice age variations. The analysis shows that the climate indeed is the result of a range of such underlying periodic processes but also of a large amount of background noise which is not periodic. That means coincidences play a large role in changes of the climate.

Tipping points might also be harder to predict
With this result we can better understand, how ice ages come and go. But we also see, that the climate system can react abruptly and unpredictably to external influences like our current emmissions of carbon dioxide.

That means it might be hard to calculate if - or when we reach a tipping point in the climate system. And we should maybe apply a more conservative risk assesment then the one IPCC recommends, says Peter Ditlevsen.

If a tipping point is reached the Earth system will change irreversibly into another state.