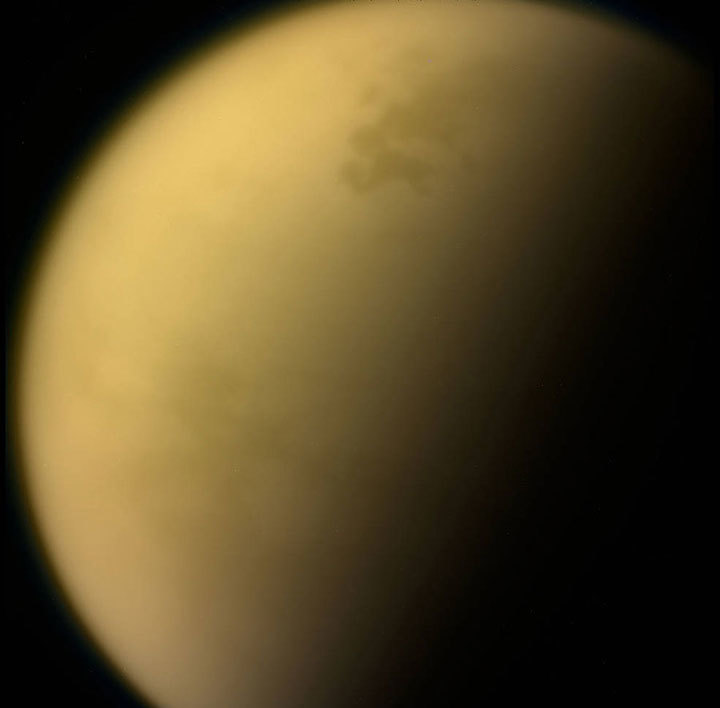 Planetary scientists using the Atacama Large Millimeter/submillimeter Array (ALMA) revealed the secrets of the atmosphere of Titan, the largest moon of Saturn. The team found a chemical footprint in Titan’s atmosphere indicating that cosmic rays coming from outside the Solar System affect the chemical reactions involved in the formation of nitrogen-bearing organic molecules. This is the first observational confirmation of such processes, and impacts the understanding of the intriguing environment of Titan.

Titan is attracting much interest because of its unique atmosphere with a number of organic molecules that form a pre-biotic environment.

Takahiro Iino, a scientist at the University of Tokyo, and his team used ALMA to reveal the chemical processes in Titan’s atmosphere. They found faint but firm signals of acetonitrile (CH3CN) and its rare isotopomer CH3C15N in the ALMA data.

“We found that the abundance of 14N in acetonitrile is higher than those in other nitrogen bearing species such as HCN and HC3N,” says Iino. “It well matches the recent computer simulation of chemical processes with high energy cosmic rays.”

There are two important players in the chemical processes of the atmosphere; ultraviolet (UV) light from the Sun and cosmic rays coming from outside the Solar System. In the upper atmosphere, UV light selectively destroys nitrogen molecules containing 15N because the UV light with the specific wavelength that interacts with 14N14N is easily absorbed at that altitude. Thus, nitrogen-bearing species produced at that altitude tend to exhibit a high 15N abundance. On the other hand, cosmic rays penetrate deeper and interact with nitrogen molecules containing 14N. As a result, there is a difference in the abundance of molecules with 14N and 15N. The team revealed that acetonitrile in the stratosphere is more abundant in 14N than those of other previously measured nitrogen-bearing molecules.

“We suppose that galactic cosmic rays play an important role in the atmospheres of other solar system bodies,” says Hideo Sagawa, an associate professor at Kyoto Sangyo University and a member of the research team. “The process could be universal, so understanding the role of cosmic rays in Titan is crucial in overall planetary science.”

Titan is one of the most popular objects in ALMA observations. The data obtained with ALMA needs to be calibrated to remove fluctuations due to variations of on-site weather and mechanical glitches. For referencing, the observatory staff often points the telescope at bright sources, such as Titan, from time to time in science observations. Therefore, a large amount of Titan data is stored in the ALMA Science Archive. Iino and his team have dug into the archive and re-analyzed the Titan data and found subtle fingerprints of very tiny amounts of CH3C15N.

These observation results are published as T. Iino et al. “14N/15N isotopic ratio in CH3CN of Titan's atmosphere measured with ALMA” in the Astrophysical Journal published on February 2020.