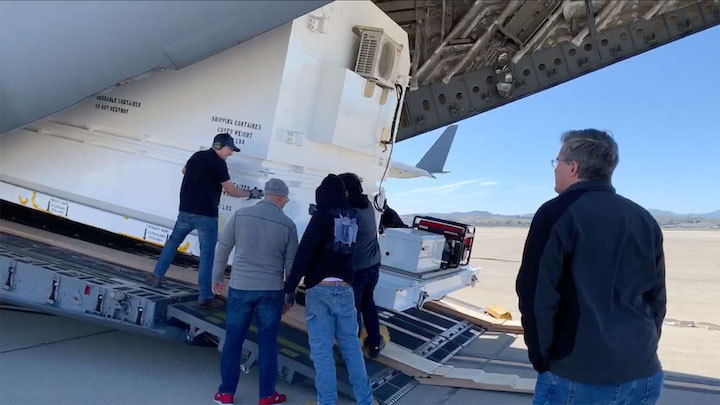 On Feb. 11, 2020, Mars 2020 Assembly, Test and Launch Operations Manager David Gruel watched as members of his team loaded NASA's next Mars rover onto an Air Force C-17 at March Air Reserve Base in Riverside, California. The rover was flown to Cape Canaveral, Florida, in preparation for its July launch. Credit: NASA/JPL-Caltech 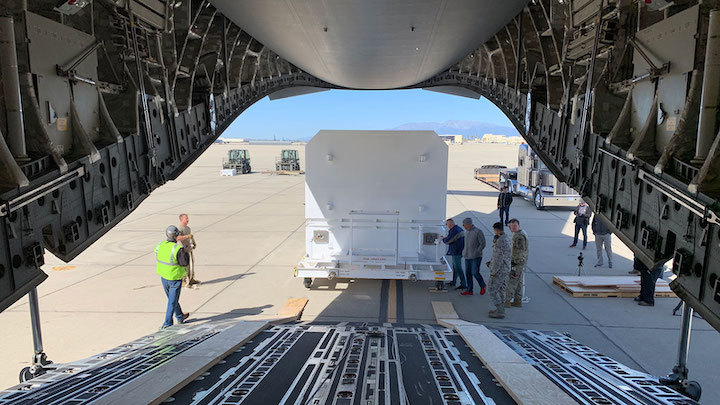 The agency's first step in returning rocks from Mars just arrived at Kennedy Space Center. The Mars 2020 team now begins readying for a launch to the Red Planet this July.

NASA's next Mars rover has arrived in Florida to begin final preparations for its launch to the Red Planet this July. Two Air Force C-17 Globemaster cargo planes carrying the Mars 2020 rover as well as the cruise stage, descent stage and Mars Helicopter touched down at NASA's Kennedy Space Center at about 3 p.m. EST (12 p.m. PST) today, completing a 2,300-mile (3,700-kilometer) trip that began yesterday at NASA's Jet Propulsion Laboratory in Pasadena, California.

"Our rover has left the only home it has ever known," said John McNamee, Mars 2020 project manager. "The 2020 family here at JPL is a little sad to see it go, but we're even more proud knowing that the next time our rover takes to the skies, it will be headed to Mars."

Assembly, test and launch operations for Mars 2020 began in January 2018. The first piece of hardware that would become part of the rover arrived on the clean room floor of JPL's Spacecraft Assembly Facility's High Bay 1 a few months later.

The rover's aeroshell - its protective covering for the trip to the Red Planet - arrived at Kennedy this past December. Early on Feb. 11, the rover, cruise stage, descent stage and mission support equipment headed in four police-escorted trucks to the U.S. Air Force's March Air Reserve Base, where they were loaded aboard the two waiting C-17s.

Within hours of arriving at the Shuttle Landing Facility at Kennedy Space Center, the 11 pallets of Mars 2020 spacecraft will be transported to the same spacecraft processing facility that in 2011 handled NASA's Curiosity rover, which is currently exploring Mars' Gale Crater. Later this week, the Mars 2020 assembly, test and launch operations team will begin testing the components to assess their health following the cross-country flight.

After months of final assembly and additional testing, Mars 2020 should be enclosed in its aeroshell for the final time in late June. It will be delivered to Cape Canaveral Air Force Station's Launch Complex 41 to be integrated with the United Launch Alliance Atlas V rocket that will hurl it toward Jezero Crater in early July.

Mars 2020 will collect and store rock and soil samples in sealed tubes and will search for signs of past microbial life, characterize the planet's climate and geology, and pave the way for human exploration. Subsequent missions, currently in the planning stages, will return to Jezero Crater, gather the samples collected by Mars 2020 and return them to Earth for the sort of in-depth study that only a full-size lab can provide.

JPL is building and will manage operations of the Mars 2020 rover for NASA. NASA's Launch Services Program, based at the agency's Kennedy Space Center in Florida, is responsible for launch management.

Nasa's 2020 rover: Can we finally answer the big question about Mars?

Exactly a year from now, a capsule will come hurtling through the atmosphere of Mars with the Americans' next big rover. If it survives the "seven minutes of terror" that describe its descent to the surface, the new robot promises a very different mission to all those that have gone before it.

Because although Mars 2020 (a new name is coming) looks like a simple copy of the Curiosity vehicle of 2012, its goals take a decisive turn towards answering the most fundamental of questions: is there - or has there ever been - life on the Red Planet?

Recent investigations have concentrated on characterising the "habitability" of Mars.

That's to say, these prior missions asked only if past conditions were conducive to biology. A less direct approach.

Mars 2020, on the other hand, will be engaged in an explicit hunt for life's traces. 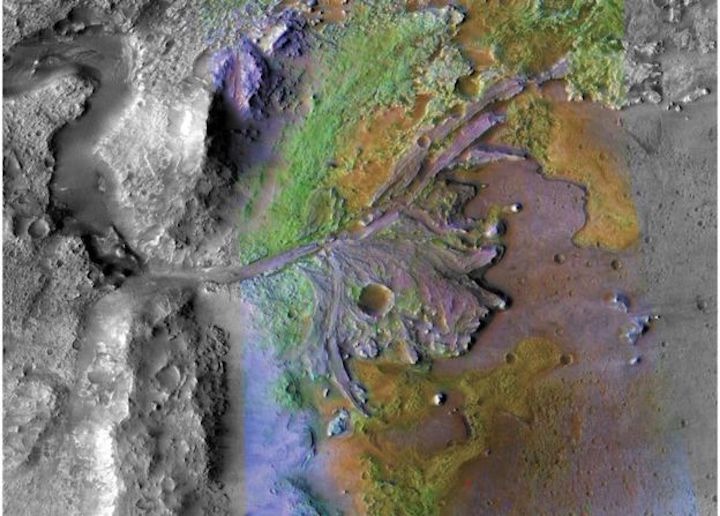 Undeniably it'll be a difficult quest. Evidence for life on the early Earth always attracts a degree of scepticism, even controversy, and laboratory equipment the size of a large room is often required to back up a claim.

So how will people react if a rover finds something intriguing imprinted in billions-of-years-old rock on another planet?

2020 mission scientist Jim Bell from Arizona State University is candid in his response: "We can make a claim about a biosignature, but it's not clear to me anyone would believe us," he said.

"So, let's bring the samples back. So if those extraordinary claims are made, they can be verified."

This then is the strategy for Mars 2020: Find something remarkable and cache it for later return to one of those big Earth laboratories.

The rover will trundle across equatorial Jezero Crater seeking out rocks that look as though they might have been laid down in the presence of biology.

The best examples will be drilled and sealed in small tubes the size of whiteboard markers. These canisters will then be placed on the surface for a later mission to pick up and take home.

A good example, says Katie Stack Morgan, might be remnants of finely layered, dome-like structures associated with ancient communities of microbes. On Earth we know such structures as stromatolites, which form at the edges of salty lakes and lagoons.

It's all about recognising tell-tale patterns, textures, and chemical compositions, the deputy project scientist told BBC News: "What [these microbes] leave behind in the rock record are very thin layers, but with concentrations of particular elements or organics at those repeated intervals that represent the ancient fossilised microbial mat. So as those mats grow, they basically form the rock. And so we're looking for those fine laminations with concentrations of organics or certain elements that wouldn't be expected if these things were just abiotic, or didn't involve life."

When Curiosity landed in Gale Crater in 2012, scientists were uncertain about its history, how the mountain at its centre formed and what sort of influence water may have played in the evolution of the deep depression.

Jezero carries far more certainty. Satellite pictures clearly illustrate the outline of a once great lake and the delta that fed it.

Enticing is the sliver of carbonate rocks that seem to mark what would have been the palaeo-lake's shoreline.

"We don't know that we're going to find reefs on Mars but we do think with these shallow waters where carbonates were precipitated, it could be that we had organisms that were making use of that carbonate just like we have here on Earth in shallow water environments."

Curiosity has astonished us with its discoveries of river-worn pebbles and lake muds that point to periods of abundant water moving across Mars early in its history.

But the veteran rover's instrumentation - frustratingly - can only grasp a coarse, or bulk, view of the chemistry that persisted at the time. It must crush up its samples before testing them. 2020, alternatively, will carry instruments that will be able to examine a rock's fine-scale textures while at the same time mapping the detailed elemental distribution within those textures.

Indeed, everything about Mars 2020 should be regarded as a step up on what's gone before, believes Dr Bell.

The Arizona scientist is leading on the main camera system that sits atop the rover's mast.

"They look like the MastCams on Curiosity; they're in the same place. But unlike the Curiosity cameras, ours will zoom from wideangle all the way to telephoto. So, we'll collect a lot more stereo and 3D data. All that was possible with Curiosity, but it was a little more cumbersome.

The rover has recently arrived at Nasa's Kennedy Space Center in Florida to begin its final preparations for launch. This will take place between 17 July and 5 August.

It's a seven-month cruise to the Red Planet.

Engineers have targeted a touchdown for shortly after 20:30 GMT on Thursday, 18 February, 2021.

The leadership council for Mars 2020 science added two new members who represent the interests of scientists destined to handle and study the first samples from Red Planet.

In the fall of 2019, the Mars 2020 rover team welcomed ten members to serve as Returned Sample Science Participating Scientists. Scheduled to launch in July 2020 as NASA's next step in exploration of the Red Planet, the Mars 2020 mission will search for signs of past microbial life, characterizing the planet's climate and geology, and will be the first planetary mission to collect and cache Martian rock core and dust samples. Subsequent missions, currently under consideration by NASA (in conjunction with the European Space Agency), would send spacecraft to Mars to collect these cached samples from the surface and return them to Earth for in-depth analysis.

NASA recentlyselected two of these Returned Sample Science Participating Scientists to join the Mars 2020 Project Science Group (PSG). As the leadership council that helps define and refine science goals and strategies of the Mars 2020 mission, the project science group coordinates the scientists involved with the Mars rover project. With the new position, Chris Herd from the University of Alberta in Edmonton, Canada, and Tanja Bosak from the Massachusetts Institute of Technology in Cambridge will represent the interests of scientists destined to handle and study the first samples from Mars.

Collecting samples from Mars and bringing them back to Earth is a historic undertaking that starts with the launch of NASA's Mars 2020 rover. The rover will collect samples and leave them ready for a future mission to retrieve and return to Earth. That future mission involves the collaboration of NASA with the European Space Agency.

"Our Returned Sample Science Participating Scientists must anticipate the needs of future investigators who will analyze these first Mars samples for a very diverse range of studies in Earth-based laboratories," said Mars 2020 Project Scientist Ken Farley, who is based at Caltech in Pasadena, California. "Chris and Tanja's appointment to the Mars 2020 PSG highlights the importance we place on the role of these scientists and that of sample return. They are speaking for history's first scientists to handle samples from another planet - many of whom at present are probably still in high school."

Herd and Bosak and the eight other Returned Sample Science Participating Scientists have hit the ground running since joining the Mars 2020 science team in the fall of 2019, working on research projects and contributing to mission planning. Things will accelerate for the 2020 team as a whole after the rover launches from Cape Canaveral Florida this July. And things will really kick into high gear after the Mars 2020 rover touches down at Mars' Jezero Crater on Feb. 18, 2021.