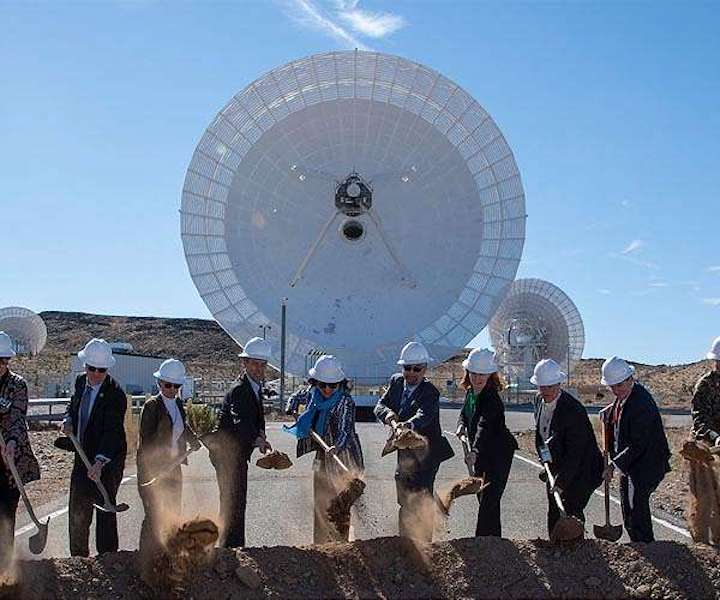 NASA, JPL, military and local officials broke ground in Goldstone, California, for a new antenna in the agency's Deep Space Network, which communicates with all its deep space missions.Credit: NASA/JPL-Caltech

Surrounded by California desert, NASA officials broke ground Tuesday, Feb. 11, on a new antenna for communicating with the agency's farthest-flung robotic spacecraft. Part of the Deep Space Network (DSN), the 112-foot-wide (34-meter-wide) antenna dish being built represents a future in which more missions will require advanced technology, such as lasers capable of transmitting vast amounts of data from astronauts on the Martian surface. As part of its Artemis program NASA will send the first woman and next man to the Moon by 2024, applying lessons learned there to send astronauts to Mars.

Using massive antenna dishes, the agency talks to more than 30 deep space missions on any given day, including many international missions. As more missions have launched and with more in the works, NASA is looking to strengthen the network. When completed in 2 0.5 years, the new dish will be christened Deep Space Station-23 (DSS-23), bringing the DSN's number of operational antennas to 13.

"Since the 1960s, when the world first watched live pictures of humans in space and on the Moon, to revealing imagery and scientific data from the surface of Mars and vast, distant galaxies, the Deep Space Network has connected humankind with our solar system and beyond," said Badri Younes, NASA's deputy associate administrator for Space Communications and Navigation, or SCaN, which oversees NASA's networks.

"This new antenna, the fifth of six currently planned, is another example of NASA's determination to enable science and space exploration through the use of the latest technology."

Managed by NASA's Jet Propulsion Laboratory in Pasadena, California, the world's largest and busiest deep space network is clustered in three locations - Goldstone, California; Madrid, Spain; and Canberra, Australia - that are positioned approximately 120 degrees apart around the globe to enable continual contact with spacecraft as the Earth rotates. (This live tool lets viewers see which DSN dishes are sending up commands or receiving data at any given time.)

The first addition to Goldstone since 2003, the new dish is being built at the complex's Apollo site, so named because its DSS-16 antenna supported NASA's human missions to the Moon. Similar antennas have been built in recent years in Canberra, while two are under construction in Madrid.

"The DSN is Earth's one phone line to our two Voyager spacecraft - both in interstellar space - all our Mars missions and the New Horizons spacecraft that is now far past Pluto," said JPL Deputy Director Larry James. "The more we explore, the more antennas we need to talk to all our missions."

While DSS-23 will function as a radio antenna, it will also be equipped with mirrors and a special receiver for lasers beamed from distant spacecraft. This technology is critical for sending astronauts to places like Mars. Humans there will need to communicate with Earth more than NASA's robotic explorers do, and a Mars base, with its life support systems and equipment, would buzz with data that needs to be monitored.

"Lasers can increase your data rate from Mars by about 10 times what you get from radio," said Suzanne Dodd, director of the Interplanetary Network, the organization that manages the DSN. "Our hope is that providing a platform for optical communications will encourage other space explorers to experiment with lasers on future missions."

While clouds can disrupt lasers, Goldstone's clear desert skies make it an ideal location to serve as a laser receiver about 60% of the time. A demonstration of DSS-23's capabilities is around the corner: When NASA launches an orbiter called Psyche to a metallic asteroid in a few years, it will carry an experimental laser communications terminal developed by JPL.

Called the Deep Space Optical Communications project, this equipment will send data and images to an observatory at Southern California's Palomar Mountain. But Psyche will also be able to communicate with the new Goldstone antenna, paving the way for higher data rates in deep space.