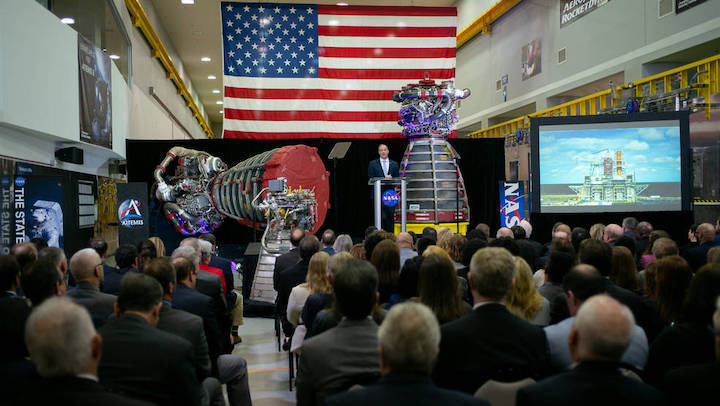 The following is a statement from NASA Administrator Jim Bridenstine:

“The budget proposed represents a 12 percent increase and makes this one of the strongest budgets in NASA history. The reinforced support from the President comes at a critical time as we lay the foundations for landing the first woman and the next man on the South Pole of the Moon by 2024. This budget keeps us firmly on that path.

“We are preparing to achieve pivotal milestones this year in development of the Space Launch System rocket, Orion spacecraft, and the Gateway. These make up the backbone of our Artemis program and are fully supported by this budget. They constitute our ability to build a sustainable lunar presence and eventually send human missions to Mars.

“We soon will launch American astronauts on American rockets from American soil for the first time in nearly a decade. This recaptured ability will not only allow us to do more science and more exploration than ever before, but will also broaden commercial activity in low-Earth orbit to support ever greater private partnerships.

“As we prepare to celebrate 20 years of continuous human presence aboard the International Space Station this year, we will continue to look for ways to partner with private enterprise and give more people access to the unique environment microgravity offers. Similarly, when we go to the Moon in the next four years, we are interested in taking the world with us. This includes those involved in our Commercial Lunar Payload Services initiative and the international relationships we have forged over the decades.

“The FY 2021 budget positions NASA to spearhead a new era of human space exploration without focusing funds on one program at the expense of others. This all-of-NASA approach to the future will help us take advantage of all the exciting, new horizons emerging in science, aeronautics, and technology.

“The decadal survey priorities are strongly supported by this budget, including history’s first Mars sample return mission, the Europa Clipper, and development of a host of new trailblazing Earth observation missions. In aeronautics, the budget backs all our cutting-edge research on commercial use of supersonic aircraft, all-electric airplanes, and development of an unmanned aerial system that will make flying small drones safer and more efficient in the 21st century.

“NASA is on the cusp of embarking on era-defining exploration. The civilization-changing technology we develop will deepen humanity’s scientific knowledge of the universe and how to take care of our ever changing world.

“I am confident the FY 2021 budget’s proper investment in our agency’s priorities, coupled with your unmatched talents and expertise, will strengthen our national posture for continued space preeminence and, as President Trump said during his State of the Union speech last week, help our nation embrace the next frontier.”