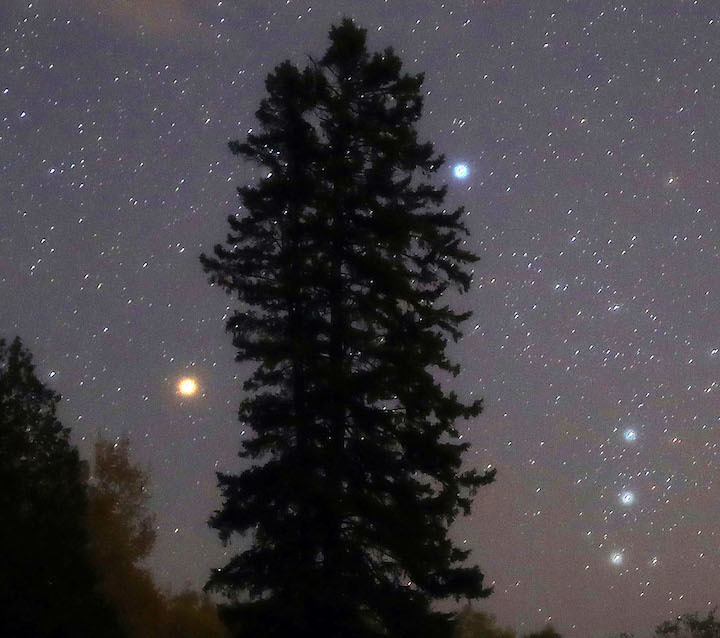 The sky provides. This winter, the fading of Betelgeusecaught us all by surprise. Now, as January wraps up, we can add a new comet discovery and a supernova bright enough to see in a 6-inch telescope to an ever-growing list of seasonal sky wonders.

As astronomers turned their spectrographs toward Betelgeuse, skywatchers from beginners to seasoned amateurs thrilled to see the red supergiant fade before their eyes. With a little help from Aldebaran and Bellatrix, which served as comparison stars, Betelgeuse made hundreds if not thousands of new variable star observers.

I spoke with Elizabeth O. Waagen, senior technical assistant at the American Association of Variable Star Observers (AAVSO), and while she didn't have an exact number at her fingertips, she confirmed that Betelgeuse inspired new observers to contribute their magnitude estimates.

This light curve from the AAVSO website plots V-band (similar to visual magnitude) CCD magnitudes of Betelgeuse between December 15, 2019, and January 29, 2020. Each green square is an observation. Notice the slow but steady fading of the star with a possible beginning of an uptick on January 29th.
Used by permission of the AAVSO

While there's always scatter in making magnitude estimates I was surprised how well novices did. From posts here and on Facebook most agreed that by late January Betelgeuse equaled Bellatrix, which shines at magnitude 1.6. That jives with the most recent to-date Johnson V-band CCD observation of magnitude 1.64 made by AAVSO observer Tom Polakis on January 28.25 UT. For my part, I noted the star at magnitude 1.7 on January 27.1 UT, a hair fainter than Bellatrix.

In the most recent (January 29th) Astronomer's Telegram (#13410) concerning the star, astronomer Edward Guinan of Villanova University writes that during his 25 years of photometry, "Betelgeuse is currently the coolest and least luminous yet observed. Since September 2019, the star's temperature has decreased by ~100K while its luminosity has diminished by nearly 25%." The numbers imply an increase in the star's radius of ~9%. As Betelgeuse fades, it also balloons.

Others have suggested that the extraordinary dimming may be due in par to expelled gas and dust clouds that partially obscure the star. Betelgeuse is highly unstable, routinely unleashing powerful stellar winds that collide and compress interstellar gas into a bow shock in the direction of the star's motion. If the supergiant's ~420-day variability period is an unusually deep one this time around then Guinan predicts the dimming trend will bottom out sometime now through early February.

What's next? You tell me! Keep an eye on what used to be Orion's second brightest star and we'll soon find out. To see what Betelgeuse is up to anytime visit the AAVSO website. In the Pick a Star box, type Betelgeuse then either select Check Recent Observations or Plot a Light Curve. You can input your own parameters by selecting Plot Another Curve in the top left-hand corner. Int he dialog boxes, you can include all observations in every color band or choose specific types such as visual, red, or V-band, for example. You can also toggle between Julian and calendar dates, and under Preferences you can set your magnitude scale.

Although Virgo is replete with galaxies, NGC 4636 will only take a little effort to find. It's located 5° NNE of Gamma () Virginis. Stellarium

While we're on the topic of stars that might explode as supernovae one day, one of Japan's most prolific supernova hunters, Koichi Itagaki, nabbed a 15th-magnitude supernova on January 12th in the 10th-magnitude elliptical galaxy NGC 4636. The following night it shot up to 13th magnitude and currently shines around magnitude 12.1, bright enough to see in a 6-inch telescope. Dubbed 2020ue, it's located 5° north-northeast of the pretty double star Gamma (γ) Virginis in Virgo. The galaxy climbs to 20° by midnight and remains well-placed through dawn.

Located well outside NGC 4636's bright nuclear region — 45.6″ west and 101.8″ south of the nucleus — supernova 2020ue is an easy catch. Magnitudes of foreground stars are shown. North is up.
Rolando Ligustri

Unlike Betelgeuse, which will potentially become a Type IIsupernova, 2020ue is a Type Iaevent involving the wholesale destruction of a white dwarf star in close orbit about a (typically) main-sequence star. After millennia of siphoning material from the companion to its surface, the dwarf puts on enough weight to exceed the Chandrasekhar Limit of 1.4 solar masses and undergoes uncontrolled gravitational collapse. Runaway fusion from the crushing heat and pressure races through the star, destroying it in a titanic blast visible across millions of light-years.

I took a look at this silent scene of destruction on January 21.4 UT and easily spotted the supernova at 64× at a comfortable distance from the galaxy's nucleus in my 15-inch reflector. It's currently about magnitude 12.1 and should remain easily accessible in a dark, moonless sky until the waxing gibbous Moon returns on February 7th.

Astronomie - The Latest on Betelgeuse
375 Views
Created with page4