Behold the Sun's convulsing surface at a level of detail never seen before.

The Daniel K Inouye Solar Telescope on Hawaii has released pictures that show features as small as 30km across.

This is remarkable when set against the scale of our star, which has a diameter of about 1.4 million km (870,000 miles) and is 149 million km from Earth.

The cell-like structures are roughly the size of the US state of Texas. They are convecting masses of hot, excited gas, or plasma.

The bright centres are where this solar material is rising; the surrounding dark lanes are where plasma is cooling and sinking.

DKIST is a brand new facility positioned atop Haleakalā, a 3,000m-high volcano on the Hawaiian island of Maui.

Its 4m (13.1ft) primary mirror is the world's largest for a solar telescope.

The observatory will be used to study the workings of the Sun. Scientists want fresh insights on its dynamic behaviour in the hope that they can forecast better its energetic outbursts - what is often referred to as "space weather".

Colossal emissions of charged particles and entrained magnetic fields have been known to damage satellites at Earth, to harm astronauts, degrade radio communications, and even to knock power grids offline.

"On Earth, we can predict if it is going to rain pretty much anywhere in the world very accurately, and space weather just isn't there yet," said Matt Mountain, president of the Association of Universities for Research in Astronomy, which manages the DKIST.

"Our predictions lag behind terrestrial weather by 50 years, if not more. What we need is to grasp the underlying physics behind space weather, and this starts at the Sun, which is what the Inouye Solar Telescope will study over the next decades."

DKIST is a superb complement to the Solar Orbiter (SolO) space observatory which is being launched next week from Cape Canaveral in Florida.

This joint European-US probe will take pictures of the Sun from the closest ever vantage point - from just 42 million km from the surface. This is nearer to our star than even the planet Mercury.

SolO will see features as small as 70km across, but will sense a much broader swathe of wavelengths than DKIST and sample more levels through the Sun's atmosphere. The probe will also fly a path that gives it an unprecedented view of the polar regions.

"We have joint observing plans already made between DKIST and Solar Orbiter which will be amazing," Prof Louise Harra from the Physical Meteorological Observatory in Davos, Switzerland, told BBC News.

Telescope captures most detailed pictures yet of the sun 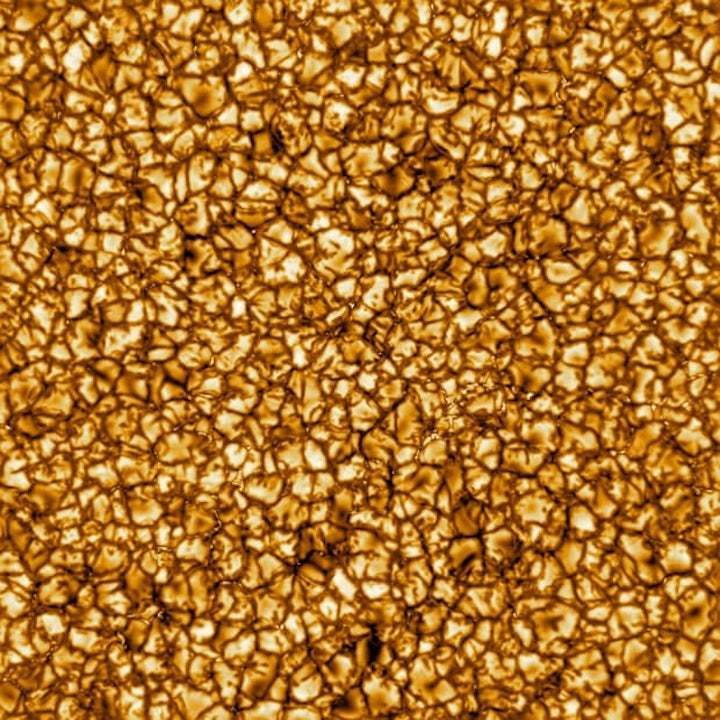 The sun’s turbulent surface has been revealed in unprecedented detail in the first observations by the Inouye solar telescope in Hawaii.

The striking images reveal a surprising level of structure hidden within the churning plasma exterior, bringing a previously hazy impression of the sun’s patchwork surface sharply into focus for the first time.

“These are the highest resolution images of the solar surface ever taken,” said Thomas Rimmele, the director of the Inouye solar telescope project. “What we previously thought looked like a bright point – one structure – is now breaking down into many smaller structures.”

The telescope’s 30km resolution is more than twice that of the next best solar observatories.

The images reveal the sun’s surface to be speckled with granular structures, like nuggets of gold, each about the size of France. Rising columns of plasma, superheated to almost 6,000C (10,800F), show up as bright spots at the centre of each grain – epicentres for the violent release of heat from the sun’s interior to its surface. As the plasma cools, it descends back below the surface via narrow, shadowy channels between neighbouring granules.

This intricate level of detail will help improve understanding of the sun’s behaviour and allow its activity cycle to be predicted more accurately.

The US National Solar Observatory’s $344m (£265m) telescope features a four-metre mirror – the world’s largest for a solar telescope – and is located at the 3,000-metre (10,000ft) summit of the Haleakalā volcano on the island of Maui.

Valentin Pillet, the director of the National Solar Observatory, described the telescope, which had been under construction since 2013, as a “formidable technological achievement”. A major challenge was maintaining the telescope’s primary mirror at ambient temperature while it looked directly at the sun – any temperature deviation causes air turbulence that could ruin the image quality. The heat is intense enough to rapidly melt metal at the mirror’s focal point.

Each night, a swimming pool’s worth of ice is emptied into eight tanks. During the day, coolant is routed through the ice tanks and distributed through the observatory by 7.5 miles (12km) of piping. More than 100 air jets are also positioned behind the main mirror.

Incoming light from the sun is deflected from the primary mirror into a chamber of mirrors that sits below the observatory’s dome. Here, the light is bounced from mirror to mirror as it is apportioned between spectrometers, polarimeters and other various other instruments. The observatory’s full suite of instruments, which will allow scientists to measure the magnetic field from the sun’s surface up to its outer atmosphere, will come online later this year.

“The bright features [in the image] … are the foothills of magnetic fields that extend all the way up into the corona and beyond,” said Rimmele. “With the additional instruments that will come online in the next six months, we will be able to measure the magnetic fields from the surface all the way up to 1.5 solar radii.”

The observations could help resolve longstanding mysteries of the sun, including the counterintuitive feature that the corona – the sun’s atmosphere – is heated to millions of degrees when its surface is only 6,000C. Understanding the physics of solar flares and coronal mass ejections could also significantly improve the ability to predict space weather, which can render GPS systems unreliable, take down power grids and knock out communication channels.

The release of the images comes as Nasa’s Parker solar probe makes observations from the edge of the sun’s atmosphere, and before the launch of the Solar Orbiter mission, a European Space Agency-Nasa collaboration, next week.