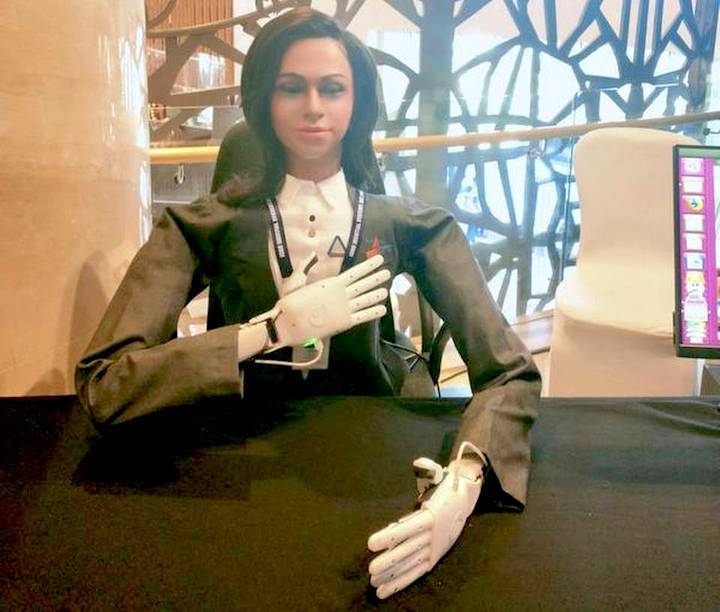 ISRO’s Lady robot ‘Vyomamitra’ was the centre of attraction at the inaugural session of the “Human Spaceflight and Exploration — Present Challenges and Future Trends” in Bengaluru on January 22, 2020.   | Photo Credit:

The half-humanoid will simulate human functions before real astronauts take off.

In the end, a “young woman” named Vyommitra will ride to space in the first test flight of the human space mission, Gaganyaan.

ISRO unveiled its first ‘woman’ astronaut to an international gathering here on Wednesday. Seated at a desk in a uniform and sporting her name on a custom-made ISRO identity badge, Vyommitra created a sensation as she introduced herself to ISRO Chairman K. Sivan and Principal Scientific Adviser K. VijayRaghavan at the symposium on human space flight.

“I am Vyommitra,” the half-humanoid tells her visitors. Her body stops at the torso and has no legs. Detailing her functions, she says, “I can do switch panel operations, ECLSS [environment control and life support systems] functions, be a companion, converse with the astronauts, recognise them and also respond to their queries.”

Dr. Sivan said the humanoid will simulate the human functions required for space before real astronauts take off before August 2022. Two trial flights without crew will take place with a humanoid — the first around December 2020 and the second around July 2021.

Vyommitra is the result of a year-long toil of the ISRO Inertial Systems Unit, Thiruvananthapuram, according to IISU Director D. Sam Dayala Dev. ISRO will send the human-resembling model in a space capsule around the end of 2020 or early 2021 to study how she — and later real astronauts — respond to living outside earth in controlled zero-gravity conditions.

She can detect and give out warnings if environmental changes within the cabin get uncomfortable to astronauts and change the air condition, Dr. Dayala Dev said. She can take up postures suited for launch and tasks and take commands.