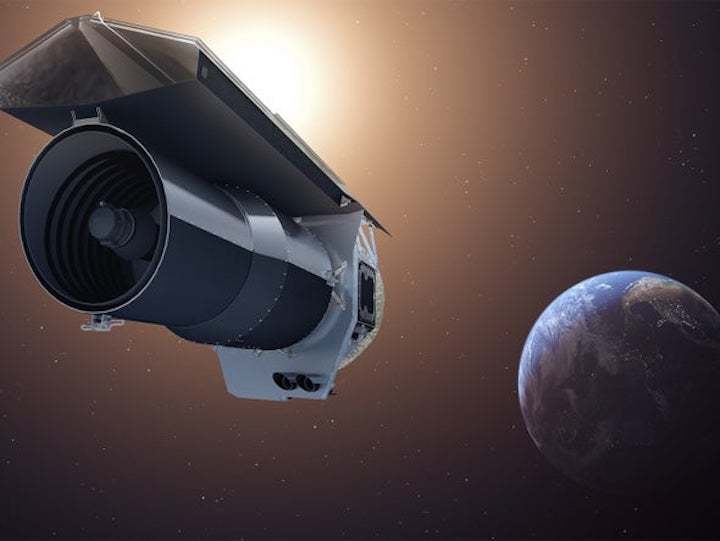 Editor’s Note (1/21/20): On January 30, 2020, spacecraft controllers will transmit the final shutdown commands to NASA’s Spitzer Space Telescope, bringing the observatory’s 16-year mission to a close. This story from 2019 details the reasons for the shutdown, reflects on Spitzer’s legacy and discusses the gap in infrared astronomy that will persist until the debut of the observatory’s successor, the James Webb Space Telescope.

In 2016 NASA’s Spitzer Space Telescope observed a distant star called TRAPPIST-1 for 500 hours. Around the star, using the telescope’s unique infrared capabilities, scientists were able to discover four roughly Earth-sized exoplanets, adding to three others previously found in the system. To date, no other star has been shown to harbor so many small worlds. Most impressive of all was that Spitzer had never been designed to find exoplanets. “When Spitzer was first conceived of in the 1980s, [exoplanets] hadn’t even been discovered,” says Charles Beichman, Executive Director of the NASA Exoplanet Science Institute at the California Institute of Technology.

Spitzer’s observations of TRAPPIST-1 were a testament to just how far the telescope has exceeded expectations. Launched in 2003 as the last of NASA’s four “great observatories”—the others being the Hubble Space Telescope, the Compton Gamma Ray Observatory, and the Chandra X-ray Observatory—Spitzer has helped usher in a new Golden Age of astronomical discovery. Even today, despite its aging hardware, the telescope continues to produce vital scientific contributions—in large part because Earth’s atmosphere blocks most infrared light, making space-based observations the only option to see the entire infrared sky. It remains, for instance, arguably the best presently available telescope for investigating exoplanet atmospheres for signs of habitability and life.

But Spitzer’s mission is now set to end. In May 2019 NASA confirmed that the telescope will be retired on January 30, 2020, bringing to a close an incredible mission that originally was planned to last only two and a half years. With modest operational costs of just $14 million a year, however, and suggestions that Spitzer could have operated until at least November 2020—bridging the gap between itself and the much-delayed James Webb Space Telescope (JWST), NASA’s next infrared space telescope—this conclusion leaves some astronomers with decidedly mixed feelings.

“It’s slightly complicated,” says Lisa Storrie-Lombardi, project manager for Spitzer at NASA’s Jet Propulsion Laboratory. “They’re going to be spending the money on something else. Originally it all made a lot of sense. JWST was going to be flying if we retired Spitzer now, but that’s a little less clean now. Spitzer has been able to do great science, and it’s still doing that; it’s going to end on a high note. $14 million is an excellent price for what Spitzer can do.”

The Spitzer mission last came up for formal consideration of its retirement in spring of 2016, when the JWST—50 times larger than Spitzer and offering vast improvements on its infrared capabilities—was planned to launch in 2018. Back then, the space agency’s decision was that Spitzer would be retired in 2019, overlapping with JWST and perfectly handing off the infrared baton. Soon, however, NASA was forced to push back the launch of JWST, first to 2019, then to 2020 and ultimately to March 2021 at the earliest. NASA officials opted to extend Spitzer’s mission to January 2020 to compensate, but calculated that beyond this date continued operation of the telescope offered dramatically diminishing returns.

This leaves a gap in infrared capabilities between Spitzer and JWST that could negatively affect astronomy as a whole. Having an infrared space telescope ready and waiting is useful to follow-up on certain events, such as exoplanet finds from NASA’s Transiting Exoplanet Survey Satellite, or gravitational-wave discoveries from the LIGO consortium, as was done with two merging stars in 2017, or even the detection of mysterious objects passing through our solar system from interstellar space. “Without Spitzer it may not have been possible to get that information,” says Michael Werner, the Project Scientist for Spitzer at JPL.

Although Spitzer’s operating costs are relatively modest, there are sound reasons to shutter the telescope in the not-too-distant future. It is slowly moving away from our planet in its Earth-trailing orbit, requiring Spitzer to pitch at higher angles to beam its transmissions home and reducing the amount of sunlight striking the spacecraft’s solar panels. Where once it could transmit indefinitely, it can now manage just two and a half hours a day before its batteries drain. Spitzer’s greater distance from Earth also means communicating with home is becoming more difficult just as the telescope’s hardware is reaching its limits. “The hardware is ageing, and rather than go to a failure where we couldn’t recover, we just want to end the mission gracefully,” says Kartik Sheth, Deputy Program Scientist at NASA headquarters in Washington, D.C.

In 2009 the mission also ran out of coolant to keep its infrared instrument cold. Rather than bring the mission to a close, scientists decided instead to enter a “warm phase,” using Spitzer’s two remaining operational infrared detectors to perform deep surveys of the universe and hunt for exoplanets. “We definitely lost some capabilities,” Beichman says. “But the warm mission, which was thought to be a little addendum to the cold mission, has gone on spectacularly well. I think that surprised [Spitzer’s] builders.”

Paul Hertz, NASA’s Astrophysics Division director, insists the decision to end the mission was based not on money but on the operational capability of the telescope. “We are not retiring Spitzer because of cost,” he says. “We are retiring it because of increasingly difficult and risky operations, which is reducing the science value of the mission. This is not something that was decided recently; rather we have been working towards end-of-mission since the decision in spring 2016.”

There had been some suggestions the telescope could endure until November 2020, and in 2017 NASA attempted to find a private entity to take over the funding of the spacecraft to see it through its final stage of operations. They were unsuccessful and, Storrie-Lombardi notes, any extension would likely have been a somewhat reduced mission owing to the aforementioned problems. “What would happen in the 2020s is the rate at which we can downlink data would be lowered,” she says. “We could take science data, but we might take less. In terms of operating the way we are now, early 2020 is a reasonable time to end.”

Almost in spite of its decline, Spitzer’s last months will be jam-packed with science. The biggest challenge between now and its end will be avoiding any anomaly that could render the telescope unusable before its appointed end. But presuming everything runs smoothly, Spitzer will collect a vast hoard of data during the next seven months that will take decades to analyze and soften the blow of the gap until the JWST—including observations of dwarf stars, the center of our galaxy and, of course, exoplanets.