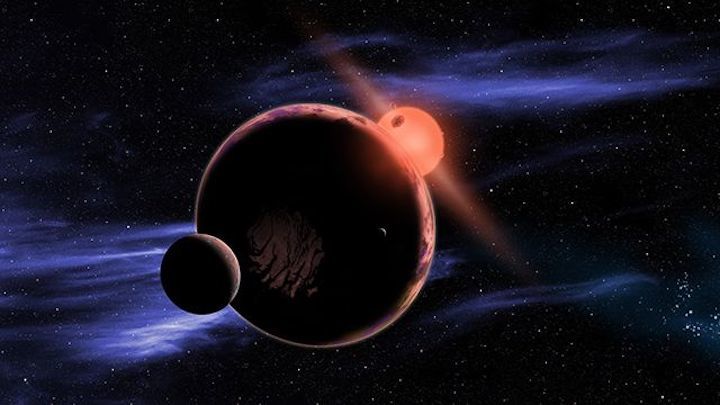 An artist's depiction of an exoplanet with two moons.
(Image: © NASA/Harvard-Smithsonian Center for Astrophysics/D. Aguilar)

It's a tough job to figure out which planets are potentially habitable, because we can only see so much detail in our telescopes.

Details of an exoplanet's atmosphere and climate, for example, are mostly out of reach. A new study, however, uses computer models to show how radiation-belching red dwarf stars, also known as M dwarfs, could affect a rocky planet's climate and make it harder for life to survive there.

A planet is considered potentially habitable if it has a rocky surface and orbits in a neighborhood surrounding its star known as the Goldilocks zone, which is at the right distance from the star to result in temperatures allowing water to exist on the planet's surface. But habitability is a complex metric that depends on not only where a planet is situated but also its climate and the temperament of its parent star.

Red dwarfs are ripe hunting grounds for exoplanet missions because they are dimmer and smaller stars than our sun. This star size makes it easier to spot planets traveling across a star's face as the planet orbits, or to measure the gravitational tugs of a planet as it circles the star. These stars, however, are known to blast out harmful radiation that could make it tough for any organisms to survive on a nearby planet's surface.

Planetary rotation is also an important factor in habitability. A slow rotation could progressively bake one side of the planet and freeze the other, beyond what life can handle.

"These kinds of models have not really been used at all in the exoplanet literature studying rocky planets because they are so computationally expensive," lead author Howard Chen, a doctoral student in planetary science at Northwestern University in Illinois, said in a statement from the university.

The new study's results show some worrying scenarios for rocky planets exposed to a lot of stellar radiation. For example, planets that are regularly bathed in ultraviolet and X-ray radiation tend to lose a lot of water due to vaporization. Planets around quieter or inactive stars could keep water on their surface, which is a key metric of habitability.

A planet's chances of supporting life also depend on its atmospheric composition, the scientists found. Earth's ozone layer filters out much of the harmful radiation from our own sun, which is a relatively inactive star. But planets with very thin ozone layers receive more ultraviolet radiation on the surface, which, again, makes it difficult for life to survive there — even if the surface has life-friendly temperatures. The situation is exacerbated if a rocky planet orbits a volatile red dwarf star that sends out a lot of radiation.

These models cannot predict with certainty whether a given planet could support life, but with thousands of planets to study, the models can help scientists figure out where to look first, senior author Daniel Horton, an assistant professor of Earth and planetary sciences at Northwestern, said in the same statement. "Our study can help limit the number of places we have to point our telescopes."

Those instruments could include NASA's James Webb Space Telescope, which launches in 2021.  Webb also will be assisted by numerous planetary observations from ground-based observatories, as well as data from NASA's former Kepler planet-hunting spacecraft and the ongoing NASA Transiting Exoplanet Survey Satellite mission.

Astronomie - Can this new model predict which alien worlds could support life?
416 Views
Created with page4