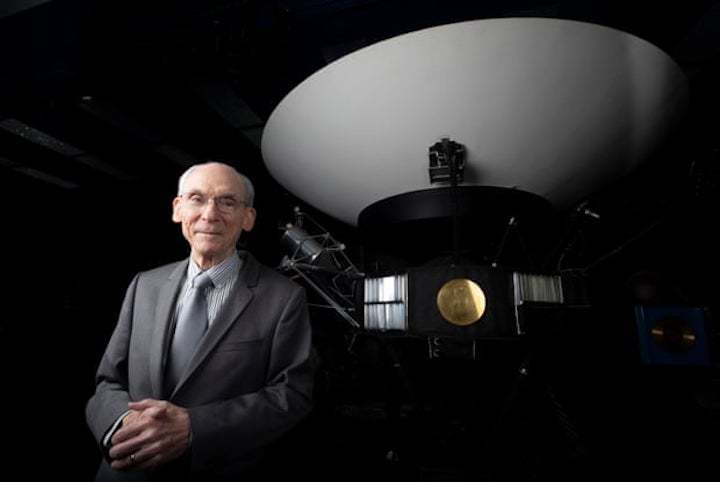 The Voyager mission has not lacked for highlights, having beamed back the first glimpses of methane oceans, erupting volcanos on a Jovian moon and a thunderstorm on Saturn. But Prof Ed Stone, who has been at Voyager’s scientific helm since 1972, says there is one place above all that he longs to visit again.

The veteran space scientist is calling for a return mission to Saturn’s icy moon, Enceladus, whose underground oceans are widely viewed as the most promising place in the solar system in which to hunt for extraterrestrial life.

“We really need to get back and look at that moon,” said Stone, 83, a professor of physics at the California Institute of Technology. “We know there’s water ice evaporating – geysering – from its south pole. It’s snowing all the time. That means there’s liquid water beneath the icy crust. Here on Earth, wherever there’s water there’s microbial life.”

The Voyager mission was dreamt up by Gary Flandro, a summer student in the 1960s at Nasa’s Jet Propulsion Laboratory, who realised that a mid-1970s launch offered a once-every-170-years opportunity to visit all four giant planets when they were in rare alignment.

Voyager’s twin spacecraft, launched in 1976, were the first to visit Jupiter and Saturn, and Voyager 2 remains the only probe to have made flybys of Uranus and Neptune. The mission transformed our view of the solar system and raised the tantalising possibility that the conditions to support basic lifeforms may exist beyond Earth – and close enough to go to investigate.

“There were many things we thought we knew,” said Stone. “Suddenly our ideas of how the solar system works, which were based quite reasonably on what we know here on Earth, just didn’t capture what nature had waiting for us as we moved out deeper and deeper into space.” 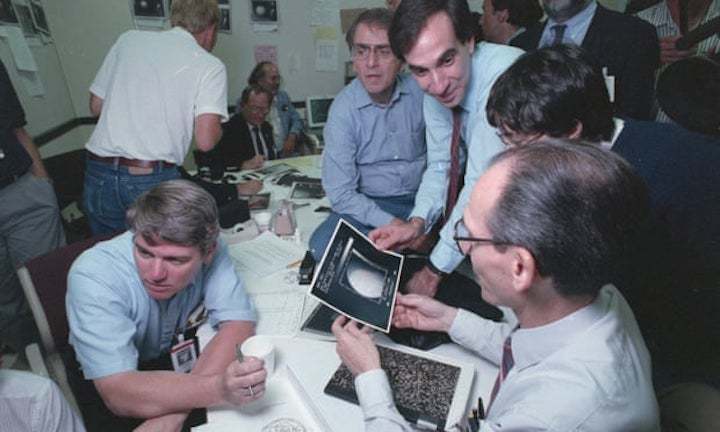 Before Voyager’s encounter in the early 1980s, Enceladus was a mere speck in Saturn’s rings. “When we flew by, it was this bright white,” said Stone. The fresh, clean ice covering its surface makes Enceladus one of the most reflective objects in the solar system and its cratered appearance hinted at geological activity below the surface that could provide a heat source for a liquid ocean.

n 2017, Nasa’s Cassini spacecraft made new observations of Enceladus and swooped through a plume of vapour erupting from cracks in the moon’s icy surface. This confirmed the presence of liquid water and organic compounds, which form the building blocks of life on Earth. But later that year Cassini plunged into Saturn’s atmosphere and burned up, leaving the question of whether there is life on Enceladus unanswered.

“Microbes are the most likely things for us to find. We’d want to look at that to see if microbes are related to those here on Earth or distinctly different.”

In November, Nasa confirmed that Voyager 2 had crossed the heliosphere, the bubble of supersonic charged particles streaming outwards from the sun, and entered the cold emptiness of interstellar space. Voyager 1, which had forged ahead without visiting Uranus and Neptune, crossed the invisible boundary six years earlier.

During the next few years the pair will continue to measure the rise and fall of solar radiation and the interstellar wind blowing in from supernovae that exploded millions of years ago. At more than 12bn miles away, the probes can still detect waves of radiation blasted out by the sun known as coronal mass ejections.

The Voyager probes are powered by steadily decaying plutonium and each year the team have to decide which instruments to switch off. By the mid-2020s the vessels will drop below critical energy levels and will fall entirely silent, but their journey will continue. “For the next billions of years these two spacecraft will be our silent ambassadors in space,” said Stone.

Stone has no immediate plans for retirement. Having spent a career shepherding the Voyager probes, currently the most distant manmade objects from the sun, he is now working on the Parker Solar Probe, which, in pleasing symmetry, recently took the record for the closest approach to the sun.

Stone is also involved in the development of the planned Thirty Meter Telescope, an immense mirrored observatory designed to be powerful enough to pick up light from the first stars as they flickered into existence in the early universe.

In May, Stone was awarded the prestigious Shaw prize for astronomy, which comes with a $1.2m monetary reward. “I’ve provided the money as an endowment for a set of summer students,” he said. “In return for the wonderful mission [Flandro] discovered, I thought I should make the same thing possible for other summer students.” The first students will start work in summer 2020.

Quelle: The Guardian
Astronomie - Voyager scientist Ed Stone on the search for extraterrestrial life: 'We need to get back to Enceladus'
155 Views
Created with page4