Wolf Cukier, 17, discovered a planet 6.9 times larger than Earth and only the 13th of its kind 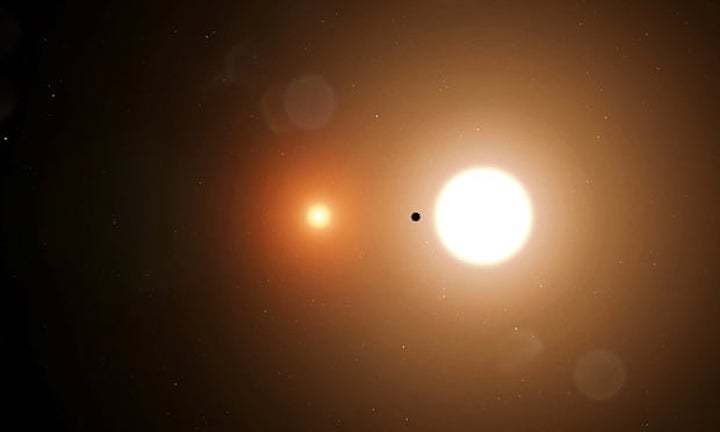 A teenage intern on his third day helping out at a Nasa program to find worlds beyond our solar system has discovered a previously unknown planet with two stars 1,300 light years from Earth away in the constellation Pictor, the agency has announced.

Assigned to study how two stars would cross paths creating an eclipse, he focused on the solar system TOI 1338, where he noticed something in the orbit of two stars that was blocking the light.

His bosses spent several weeks verifying his observation, and ultimately concluded that Cukier had discovered a planet 6.9 times larger than Earth and only the 13th planet of its kind ever discovered.

“I was looking through the data for everything the volunteers had flagged as an eclipsing binary, a system where two stars circle around each other and from our view eclipse each other every orbit,” Cukier said, according to a Nasa press release.

“About three days into my internship, I saw a signal from a system called TOI 1338. At first I thought it was a stellar eclipse, but the timing was wrong. It turned out to be a planet.”

Cukier told CBS: “The planet blocked the light from those two stars, leading to a small dip in the amount of light that reached the telescope. That’s what I noticed at first.”

“It was like, oh … there’s something here that was cool. But it’s also not like there’s a single moment of discovery,” Cukier said.

Research on the newly discovered planet, known to astrophysicists as a circumbinary planet and now dubbed TOI 1338 b, was presented during the 235th American Astronomical Society meeting in Honolulu.

According to Nasa, the stars make an eclipsing binary, which occurs when the stellar companions circle each other in our plane of view. One is about 10% more massive than our sun, while the other is cooler, dimmer and only one-third the sun’s mass.

A paper co-authored by Cukier along with established scientists has been submitted to a scientific journal, Nasa said.

“TOI 1338 b’s transits are irregular, between every 93 and 95 days, and vary in depth and duration thanks to the orbital motion of its stars. Tess only sees the transits crossing the larger star – the transits of the smaller star are too faint to detect. Its orbit is stable for at least the next 10m years. The orbit’s angle to us, however, changes enough that the planet transit will cease after November 2023 and resume eight years later.”

Cukier, a Star Wars fan, has said he hoped this is the beginning of a career in the field.

“Our confidence went up and down a couple of times, but by the end of the internship, we were confident that what we found was a planet,” Cukier told ABC News about his and his team’s excited investigations.