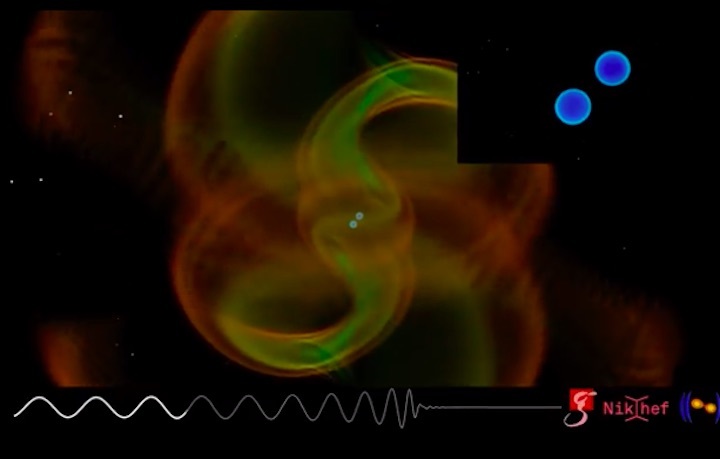 Gravitational waves from the merger of two neutron stars were observed by the LIGO Livingston detector on 25 April 2019 – according to an international team of astrophysicists in the LIGO and Virgo collaborations. This is the second time that a signal from such an event has been seen and the merger is puzzling astrophysicists because it appears to have created an object with “unusually high mass”.

In a paper that has been submitted to The Astrophysical Journal Letters, the researchers say that the merger occurred about 500 million light-years away. The above video is a simulation of the merger process and the gravitational waves it produced.

The signal (dubbed GW 190425) was not recorded by the LIGO Hanford detector, which was not operating at the time, nor was it detected by the Virgo detector.

A recent preprint from an independent team of astronomers in Russia suggests that two gamma-ray pulses were also emitted during the April 2019 merger. No other electromagnetic radiation associated with the event has been reported.

LIGO comprises two 4 km long interferometers in the US – one in Livingston, Louisiana and the other in Hanford, Washington. The Virgo interferometer stretches over 3 km in the Italian countryside near Pisa. In August 2017 the two LIGO detectors spotted gravitational waves from the merger of two neutron stars – the first time ever that such an observation was made. A signal was not seen in Virgo, but this non-detection allowed LIGO–Virgo scientists to better locate the merger in the sky.

The merger created a huge “kilonova” explosion and astronomers observed signals across a wide range of the electromagnetic spectrum from radio waves to gamma-rays. This was the first-ever “multimessenger astronomy” observation involving gravitational waves and it has already shed light on important issues in astrophysics including how heavy elements are created in the universe.

While GW 190425 was not accompanied by a spectacular light show, it does have an intriguing feature – the object created in the merger has the mass of about 3.4 Suns. This is much greater than 2.9 solar masses, which is the maximum combined mass of neutron stars in known binary systems in the Milky Way.

“From conventional observations with light, we already knew of 17 binary neutron star systems in our own galaxy and we have estimated the masses of these stars,” explains LIGO team member Ben Farr. “What’s surprising is that the combined mass of this binary is much higher than what was expected,” adds Farr, who is at the University of Oregon.

This high mass had led to early speculation that GW 190425 could have been the result of a merger of a neutron star and a black hole – making it the first such event to be observed. That, however, has since been discounted by the LIGO–Virgo team. Surabhi Sachdev of Penn State University explains: “What we know from the data are the masses, and the individual masses most likely correspond to neutron stars”. She also says that unusually high mass of the system “could have interesting implications for how the [neutron-star] pair originally formed”. Indeed, the LIGO–Virgo team suggest that new models of pair formation need to be developed in order to explain the observation.

Independent of the LIGO–Virgo team, Alexei Pozanenko of the Russian Academy of Sciences and colleagues point out that a gamma-ray spectrometer on board the INTEGRAL satellite observed two weak gamma-ray bursts 0.5 s and 5.9 s after gravitational waves from GW 190425 were detected by LIGO. INTEGRAL also observed a gamma-ray burst shortly after the 2017 neutron-star merger, as did the Fermi Gamma-ray Space Telescope.

Pozanenko and colleagues suggest that Fermi did not detect bursts in 2019 because the Earth was between it and the merging neutron stars when the signal arrived. This, they point out, could help further localize GW 190425 in the sky. Because it was only detected by LIGO Livingston (and not detected by Virgo), the location of the merger can only be constrained to within 20% of the sky – a much greater area than the 0.04% of the sky that the 2017 event was limited to. This uncertainty in location could explain why astronomers have not been able to observe electromagnetic radiation from GW 190425.

While the LIGO–Virgo team say that there are no “confirmed” electromagnetic observations associated with GW 190425, they do acknowledge the INTEGRAL observation in their submitted paper.