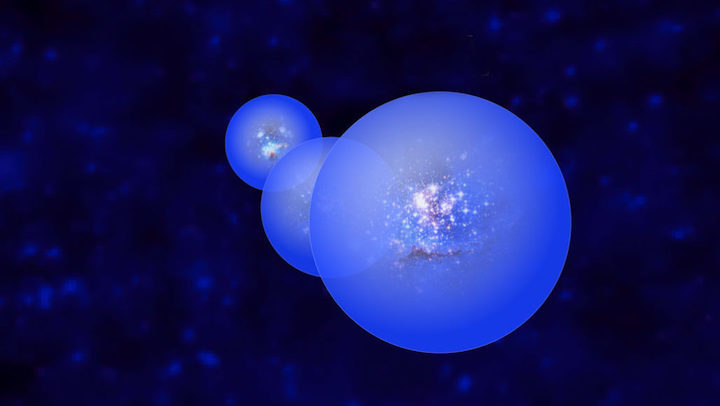 Bubbles of ionized hydrogen surround three galaxies (illustrated) in the very early universe, perhaps providing a peek into how most of the hydrogen in the cosmos became ionized.

HONOLULU – A trio of bubble-blowing galaxies may offer clues about one of the greatest cosmic makeovers in the history of the universe.

Sometime during the universe’s first billion or so years, most of the hydrogen atoms in the cosmos became ionized when their electrons were torn away (SN: 11/7/19). Astronomers suspect that this reionization — so called because all hydrogen had been previously ionized for the first few hundred thousand years — was triggered by harsh ultraviolet light from the first generations of stars.

Now, researchers say they’ve caught a few galaxies blasting out ionizing light and stripping electrons from surrounding hydrogen just 680 million years after the Big Bang. If so, this would be the first direct evidence of a group of galaxies working together to ionize the early cosmos.

James Rhoads, an astrophysicist at NASA’s Goddard Space Flight Center in Greenbelt, Md., presented the results January 5 during a news conference at a meeting of the American Astronomical Society.

To look for ionizing galaxies, the team sought out galaxies in the remote universe emitting a specific wavelength of ultraviolet light. Neutral hydrogen absorbs this wavelength, preventing it from reaching Earth, but ionized hydrogen lets it slip by. Using the Mayall 4-meter Telescope on Kitt Peak in Arizona, Rhoads and colleagues went hunting for this light in a well-studied strip of the northern sky. They found three galaxies, huddled together, shining with the light — light that took over 13 billion years to reach Earth.

During that long-ago epoch, much of the universe’s hydrogen was still neutral. But the team argues that these three galaxies have created overlapping bubbles of ionized hydrogen in a sea of neutral hydrogen, allowing the ultraviolet light to escape the galaxies unimpeded. The largest of these bubbles is calculated to be over 6 million light-years across, an estimate based on how much ionizing light the brightest galaxy likely pumped out over its lifetime. That’s large enough for the ongoing expansion of the universe to stretch the light out to a longer wavelength during its travel time, so that by the time it reaches the edge of the bubble, it can pass through the enveloping neutral hydrogen (SN: 7/30/19).

While the brightest of these three galaxies was known to emit ionizing light, no one had yet noticed that its neighbors did as well, says Brant Roberston, an astrophysicist at the University of California, Santa Cruz, who was not involved with this research.

“What’s interesting about the galaxies being together is they can work together as a team,” Roberston says. “Once the bubbles around them overlap, then it becomes easier for them to start ionizing a larger region around them than if they each had to work on their own in separate little bubbles.”

These galaxies are so far away from Earth that it’s tough to measure more than a few properties about them, Rhoads says. So it’s hard to say exactly what lets the galaxies send out so much ionizing radiation.

To grapple with that question, Rhoads and others are looking closer to home. “We’re studying nearby galaxies that are similar in nature to these ones,” he says. By investigating those closer star systems, “we are able to look for trends in what galaxy properties allow ionizing photons to escape.”

Astronomers using the Mayall telescope at Kitt Peak National Observatory, a program of NSF's National Optical-Infrared Astronomy Research Laboratory, have identified several overlapping bubbles of hydrogen gas ionized by the stars in early galaxies, a mere 680 million years after the Big Bang. This is the earliest direct evidence from the period when the first generation of stars formed and began reionizing the hydrogen gas that permeated the Universe.

There was a period in the very early Universe -- known as the "cosmic dark ages" -- when elementary particles, formed in the Big Bang, had combined to form neutral hydrogen but no stars or galaxies existed yet to light up the Universe. This period began less than half a million years after the Big Bang and ended with the formation of the first stars. While this stage in the evolution of our Universe is indicated by computer simulations, direct evidence is sparse.

Now, astronomers using the infrared imager NEWFIRM on the 4-meter Mayall Telescope at the Kitt Peak National Observatory of NSF's National Optical-Infrared Astronomy Research Laboratory (OIR Lab), have reported imaging a group of galaxies, known as EGS77 [1], that contains these first stars. Their results were announced at a press conference held today at the 235th meeting of the American Astronomical Society (AAS) in Honolulu, Hawai'i.

"The young Universe was filled with hydrogen atoms, which so attenuate ultraviolet light that they block our view of early galaxies," said James Rhoads at NASA's Goddard Space Flight Center in Greenbelt, Maryland, who presented the findings at the AAS press conference. "EGS77 is the first galaxy group caught in the act of clearing out this cosmic fog."

The team began with an imaging survey designed to detect high redshift galaxies and combined these data with corresponding images taken by the Hubble Space Telescope. This enabled the team to compute what is known as a photometric redshift, a proxy for estimating distance. At these redshifts, a galaxy's light is shifted completely out of the range of wavelengths to which the human eye is sensitive (the visible spectrum) to longer (infrared) wavelengths. The criteria for selecting distant galaxy candidates included a clear detection of them in the special infrared narrowband filters used with NEWFIRM on the Mayall 4-meter telescope and a complete non-detection in the shorter wavelength optical filter bands used by Hubble. "The discovery of the two fainter galaxies in the group was only possible because of the special narrowband filter used with NEWFIRM," said team leader Vithal Tilvi, a researcher at Arizona State University in Tempe.

"Intense light from galaxies can ionize the surrounding hydrogen gas, forming bubbles that allow starlight to travel freely," said Tilvi. "EGS77 has formed a large bubble that allows its light to travel to Earth without much attenuation. Eventually, bubbles like these grew around all galaxies and filled intergalactic space, clearing the way for light to travel across the Universe."

EGS77 was discovered as part of the Cosmic Deep And Wide Narrowband (Cosmic DAWN) survey, for which Rhoads serves as principal investigator. The team imaged a small area in the constellation of Boötes using a custom-built filter on the National Optical Astronomy Observatory's Extremely Wide-Field InfraRed imager (NEWFIRM). Ron Probst, a DAWN team member who also helped to develop NEWFIRM, adds, "These results show the value of maintaining instruments at our national observatories that are powerful and can flexibly adapt to pursue new scientific questions, questions that may not have been in mind when an instrument was originally built."

Once identified, the distances and hence the ages of these galaxies were confirmed with spectra taken with the MOSFIRE spectrograph at the Keck I telescope at the W. M. Keck Observatory on Maunakea in Hawai'i. All three galaxies show strong emission lines of hydrogen Lyman alpha at a redshift (z = 7.7), which means we are seeing them at about 680 million years after the Big Bang. The size of the ionized bubble around each was derived from computer modeling. These bubbles overlap spatially, but are large enough (about 2.2 million light-years) that Lyman alpha photons are redshifted before they reach the boundary of the bubble and can thus escape unscathed, allowing astronomers to detect them.

"We expected that reionization bubbles from this era in cosmic history would be rare and hard to find," said Sangeeta Malhotra, a collaborator at NASA GSFC, "so confirmation of this transition is important." This "cosmic dawn", the intermediate state between a neutral and an ionized Universe, is something that has been predicted. Such discoveries are made possible by the availability of powerful astronomical instruments that can probe the Universe in a way unimagined by past generations of astronomers.