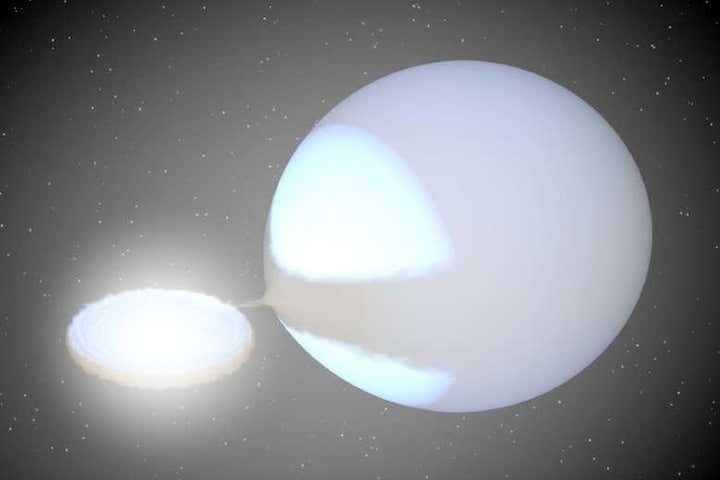 A pair of stars doing a cosmic dance are getting ready to explode. The two stars make up a binary called V Sagittae in the constellation Sagitta, and they have brightened 10-fold over the course of the last century. In this century, they are due to brighten so much that the explosion will be visible with the naked eye.

V Sagittae is made up of a white dwarf, which is the burned-out corpse of a star, and another star about four times as massive. As the two circle around one another, plasma is pulled from the star onto the white dwarf and they get closer together. Bradley Schaefer at Louisiana State University and his colleagues examined photos of the pair of stars from 1890 to the present and found that they have been getting exponentially brighter since then.

When they modelled this brightening, they found that the two stars must be rapidly getting closer together, spinning faster and faster around one another. They calculated that the stars of V Sagittae will smash together in about the year 2083, producing an enormous explosion. Schaeffer presented this work at a meeting of the American Astronomical Society in Hawaii on 6 January.

“The fate of V Sagittae is inevitable,” he said during a press conference. “Set your calendar.” Over the final weeks of their spiral towards one another, most of the mass of the normal star will be sucked away onto the white dwarf and the two will merge into a single huge star.

The resulting explosion will probably outshine every star in the night sky. It will be at least as bright as Sirius, which is the brightest star – and may even get as bright as Venus. This brightness will last for about a month, and then begin to fade.

“We haven’t had a [temporary burst of light] in the sky get this bright since Kepler’s Supernova in 1604,” said Schaeffer. “You’re going to be able to look up in light-polluted cities and there’s a new star there.”