Imagine a fleet of 100 Hubble Space Telescopes, deployed in a strategic space-invader-shaped array a million miles from Earth, scanning the universe at warp speed.

With NASA's Wide Field Infrared Survey Telescope, scheduled for launch in the mid-2020s, this vision will (effectively) become reality.

WFIRST will capture the equivalent of 100 high-resolution Hubble images in a single shot, imaging large areas of the sky 1,000 times faster than Hubble. In several months, WFIRST could survey as much of the sky in near-infrared light — in just as much detail — as Hubble has over its entire three decades.

This simulated image of a portion of our neighboring galaxy Andromeda (M31) provides a preview of the vast expanse and fine detail that can be covered with just a single pointing of WFIRST. Using information gleaned from hundreds of Hubble observations, the simulated image covers a swath roughly 34,000 light-years across, showcasing the red and infrared light of more than 50 million individual stars detectable with WFIRST.
Credits: NASA's Goddard Space Flight Center

Elisa Quintana, WFIRST Deputy Project Scientist for Communications at NASA's Goddard Space Flight Center in Greenbelt, Maryland, is confident that WFIRST will have the power to transform astrophysics. "To answer fundamental questions like: How common are planets like those in our solar system? How do galaxies form, evolve, and interact? Exactly how — and why — has the universe's expansion rate changed over time? We need a tool that can give us both a broad and detailed view of the sky. WFIRST will be that tool."

Although WFIRST has not yet opened its wide, keen eyes on the universe, astronomers are already running simulations to demonstrate what it will be able to see and plan their observations.

This simulated image of a portion of our neighboring galaxy, Andromeda (M31), provides a preview of the vast expanse and fine detail that can be covered with just a single pointing of WFIRST. Using information gleaned from hundreds of Hubble observations, the simulated image covers a swath roughly 34,000 light-years across, showcasing the red and infrared light of more than 50 million individual stars detectable with WFIRST.

While it may appear to be a somewhat haphazard arrangement of 18 separate images, the simulation actually represents a single shot. Eighteen square detectors, 4096 by 4096 pixels each, make up WFIRST’s Wide Field Instrument (WFI) and give the telescope its unique window into space.

The Advantages of Speed

WFIRST is designed to collect the big data needed to tackle essential questions across a wide range of topics, including dark energy, exoplanets, and general astrophysics spanning from our solar system to the most distant galaxies in the observable universe. Over its 5-year planned lifetime, WFIRST is expected to amass more than 20 petabytes of information on thousands of planets, billions of stars, millions of galaxies, and the fundamental forces that govern the cosmos.

For astronomers like Ben Williams of the University of Washington in Seattle, who generated the simulated data set for this image, WFIRST will provide a valuable opportunity to understand large nearby objects like Andromeda, which are otherwise extremely time-consuming to image because they take up such a large portion of the sky.

"We have spent the last couple of decades getting images at high resolution in small parts of nearby galaxies. With Hubble you get these really tantalizing glimpses of very complex nearby systems. With WFIRST, all of a sudden you can cover the whole thing without spending lots of time," Williams said.

The ability to image such a large area will provide astronomers with important context needed to understand how stars form and how galaxies change over time. Williams explained that with a wide field, "you get the individual stars, you get the structures they live in, and the structures that surround them in their environment."

Julianne Dalcanton of the University of Washington, who led the Panchromatic Hubble Andromeda Treasury (PHAT) program that the simulated data are based on, also believes that WFIRST's combination of ultra-telephoto and super-wide-angle capabilities will be ground-breaking. "The PHAT survey of Andromeda was a tremendous investment of time, requiring careful justification and forethought. This new simulation shows how easy an equivalent observation could be for WFIRST." WFIRST could survey Andromeda nearly 1,500 times faster than Hubble, building a panorama of the main disk of the galaxy in just a few hours. 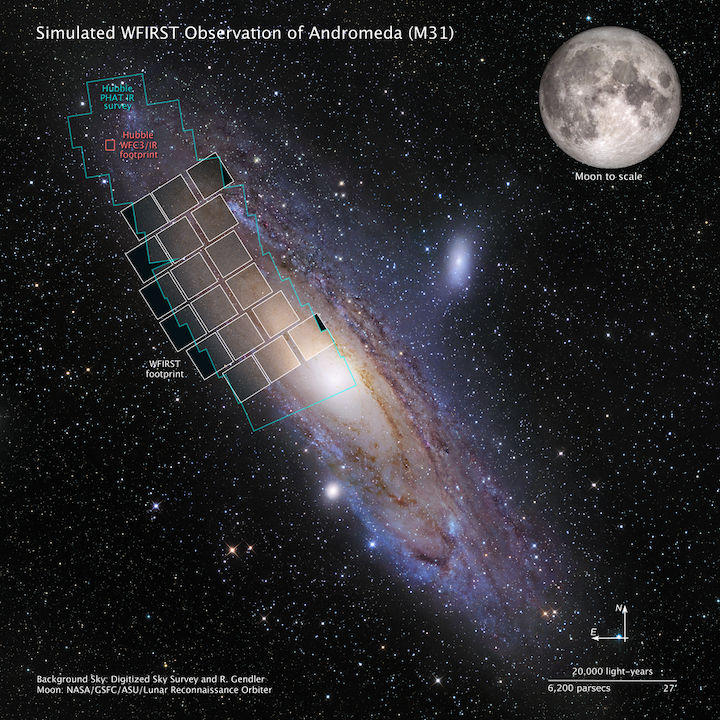 A composite figure of the Andromeda galaxy (M31) highlights the extremely large field of view of NASA’s upcoming Wide Field Infrared Survey Telescope (WFIRST). The background consists of ground-based imagery of the main disk of the Andromeda galaxy from the Digitized Sky Survey (DSS). A photo of the full Moon from NASA’s Lunar Reconnaissance Orbiter is provided for scale: Andromeda has a diameter of about 3 degrees on the sky, while the Moon is about 0.5 degrees across. (In reality, the Moon is much smaller than Andromeda, but it is also a lot closer.) Outlined in teal is the region of Andromeda covered by the Panchromatic Hubble Andromeda Treasury (PHAT) mosaic, the largest Hubble mosaic ever created. Overlaid on the PHAT region and outlined in white is the footprint of the 18 square detectors that make up WFIRST’s Wide Field Instrument (WFI). The entire footprint covers about 1⅓ times the area of the full Moon and represents the area captured in a single shot by WFIRST (0.28 square degrees of the sky). The PHAT, which covers a 61,000-light-year swath of Andromeda, consists of more than 400 composite images collected over more than 650 hours of infrared observing time between 2010 and 2013. WFIRST could cover the entire PHAT, at the same resolution, with just two pointings in less than half an hour.
Credits: Background image: Digitized Sky Survey and R. Gendler, Moon image: NASA, GSFC, and Arizona State University, WFIRST simulation: NASA, STScI, and B. F. Williams (University of Washington)

WFIRST's extraordinary survey speed is a result of its wide field of view, its agility, and its orbit. Williams explained that by covering more area in one field and being able to switch fields more quickly, "you're avoiding all those overheads that are associated with repointing the telescope so many times." In addition, WFIRST's orbit one million miles out will provide a view that is generally unobstructed by Earth. While Hubble is often able to collect data during only half of its low-Earth orbit 350 miles up, WFIRST will be able to observe more-or-less continuously.

Because it can collect so much detailed data so quickly, WFIRST is ideally suited for large surveys. A significant portion of the mission will be dedicated to monitoring hundreds of thousands of distant galaxies for supernova explosions, which can be used to study dark energy and the expansion of the universe. Another major program will involve mapping the shapes and distribution of galaxies in order to better understand how the universe — including galaxies, dark matter, and dark energy — has evolved over the past 13+ billion years.

WFIRST will also play an important role in the census of exoplanets. By monitoring the brightness of billions of stars in the Milky Way, astronomers expect to catch thousands of microlensing events — slight increases in brightness that occur when a planet passes between the telescope and a distant star. WFIRST's ability to detect planets that are relatively small or far from their own stars — as well as rogue planets, which don't orbit any star at all — will help fill major gaps in our knowledge of planets beyond our solar system. Although microlensing will not give us the ability to see exoplanets directly, WFIRST will also carry a coronagraph, a technology demonstration instrument designed to block enough of the blinding starlight to make direct imaging and characterization of orbiting planets possible.

These large surveys are also expected to reveal the unexpected: strange, transient phenomena that have never before been observed. "If you cover a lot of the sky, you're going to find those rare things," explained Williams.

Further broadening its potential impact, all of the data collected by WFIRST will be non-proprietary and immediately available to the public. Dalcanton underscored the importance of this aspect of the mission: "Thousands of minds from across the globe are going to be able to think about that data and come up with new ways to use it. It's hard to anticipate what the WFIRST data will unlock, but I do know that the more people we have looking at it, the greater the pace of discovery."

WFIRST's combination of talents will be a valuable complement to those of other observatories, including Hubble and the James Webb Space Telescope. "With one hundred times the field of view of Hubble, and the ability to rapidly survey the sky, WFIRST will be an extremely powerful discovery tool," explained Karoline Gilbert, WFIRST Mission Scientist at the Space Telescope Science Institute in Baltimore, Maryland. "Webb, which is 100 times more sensitive and can see deeper into the infrared, will be able to observe the rare astronomical objects discovered by WFIRST in exquisite detail.  Meanwhile, Hubble will continue to provide a unique view into the optical and ultraviolet light emitted by the objects that WFIRST discovers, and Webb follows up on."

The simulated image is being presented at the 235th meeting of the American Astronomical Society in Honolulu, Hawaii.

WFIRST is managed by NASA's Goddard Space Flight Center in Greenbelt, Maryland, with participation by the Jet Propulsion Laboratory (JPL) in Pasadena, California; the Space Telescope Science Institute (STScI) in Baltimore, Maryland; the Infrared Processing and Analysis Center (IPAC), also in Pasadena; and a science team comprising members from U.S. research institutions across the country, as well as international and industrial partners. WFIRST's Science Operations Center (SOC) will reside at the STScI, which also runs science operations for Hubble and will be SOC and Mission Operations Center for the James Webb Space Telescope. All of the data collected by the WFIRST mission will be held in the Barbara A. Mikulski Archive for Space Telescopes (MAST) at STScI.

This simulated image of a portion of the Andromeda galaxy highlights the high resolution, large field of view, and unique footprint of NASA’s upcoming Wide Field Infrared Survey Telescope (WFIRST). Made using data from the Panchromatic Hubble Andromeda Treasury (PHAT) program, the image spans approximately 34,000 light-years, or about 1/5 of the full disk of Andromeda, showcasing the red and near-infrared light of more than 50 million individual stars. Red and green represent near-infrared light, while blue represents visible red light. The image runs from the edge of the bright core of the galaxy on the lower left, out along and across several of the galaxy’s spiral arms in the middle and right. Credit: NASA, STScI and B.F. Williams (University of Washington)