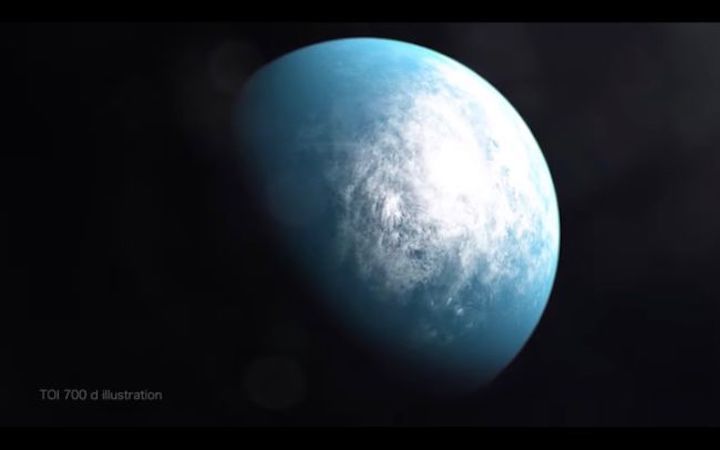 For the first time, the agency's Transiting Exoplanet Survey Satellite (TESS) has discovered a roughly Earth-size planet in the habitable zone of its host star, the zone of orbital distances where liquid water could be stable on a world's surface, researchers announced today (Jan. 6).

The newfound exoplanet, known as TOI 700 d, lies just 101.5 light-years from Earth, making it a good candidate for follow-up observations by other instruments, scientists added.

"TESS was designed and launched specifically to find Earth-sized planets orbiting nearby stars," Paul Hertz, astrophysics division director at NASA Headquarters in Washington, said in a statement. "Planets around nearby stars are easiest to follow up with larger telescopes in space and on Earth. Discovering TOI 700 d is a key science finding for TESS."

TESS, which launched in April 2018, hunts for planets using the "transit method," looking for telltale dips in stellar brightness caused by orbiting worlds crossing stars' faces from the satellite's perspective. This same strategy was used to great effect by NASA's Kepler space telescope, which discovered about 70% of the roughly 4,000 known exoplanets.

TESS found three different planets circling the star TOI 700 (TOI is short for "Tess Object of Interest"). One of the other planets is a red dwarf about 40% as massive, 40% as wide and 50% as hot as Earth's sun. The innermost world, TOI 700 b, is roughly Earth-sized and completes one orbit every 10 Earth days. The center planet, TOI 700 c, is 2.6 times bigger than our planet, meaning it's likely a gassy "mini-Neptune," and zips around TOI 700 every 16 days.

TOI 700 d, the outermost known planet in the system, is the really intriguing one. It's just 20% larger than Earth and completes one orbit every 37 days. The alien world receives 86% of the stellar energy that Earth gets from the sun, putting TOI 700 d in the habitable zone (at least as it's traditionally defined), discovery team members said.

All three planets may be tidally locked to TOI 700, always showing it the same face just as Earth's moon only ever shows us its near side. But tidal locking doesn't necessarily preclude the possibility of life on an alien world, astronomers say. And there's more good news along these lines regarding TOI 700.

"In 11 months of data, we saw no flares from the star, which improves the chances TOI 700 d is habitable and makes it easier to model its atmospheric and surface conditions," discovery team leader Emily Gilbert, a graduate student at the University of Chicago, said in the same statement.

(Red dwarfs are generally much more active than the sun, and there's considerable debate about how habitable their planets may be as a result. Frequent and powerful flaring, for example, can strip away a planet's atmosphere.)

TESS isn't the only spacecraft that has spotted evidence of TOI 700 d. A different team of researchers used NASA's Spitzer Space Telescope to confirm the existence of the alien planet.

"Given the impact of this discovery — that it is TESS’s first habitable-zone Earth-size planet — we really wanted our understanding of this system to be as concrete as possible," team leader Joseph Rodriguez, an astronomer at the Harvard–Smithsonian Center for Astrophysics in Cambridge, Massachusetts, said in the same statement.

"Spitzer saw TOI 700 d transit exactly when we expected it to," Rodriguez added. "It's a great addition to the legacy of a mission that helped confirm two of the TRAPPIST-1 planets and identify five more."

TRAPPIST-1 is a dwarf star that lies just 40 light-years away from us and hosts seven Earth-size planets, three of which appear to be in the habitable zone. The system is a prime candidate for observation by NASA's James Webb Space Telescope, which is scheduled to launch in 2021. James Webb should be able to probe the TRAPPIST-1 worlds' atmospheres for potential biosignature gases, such as methane and oxygen, scientists have said.

TOI 700 is a bit farther away, but it's still close enough to be scrutinized in more detail in the future. And scientists do hope to learn more about it via observations by other instruments. For example, they want to pin down TOI 700 d's mass by measuring how much its gravity tugs the host star this way and that. Without knowing the mass, it's unclear how dense TOI 700 d is — and thus if it's a rocky world like Earth.

And in-depth observations of light that has streamed through TOI 700 d's atmosphere on its way to Earth could tell us a great deal about conditions on the alien world's surface, which remain a total mystery at the moment.

A third team of researchers, led by Gabrielle Engelmann-Suissa, a Universities Space Research Association visiting research assistant at NASA's Goddard Space Flight Center in Greenbelt, Maryland, did some modeling work to get at the various possibilities. And those possibilities are vast. For example, one of their simulations depicted TOI 700 d as an ocean-covered world with a carbon-dioxide-dominated atmosphere, whereas another one pictured the planet as a dry, cloudless world.

"Someday, when we have real spectra from TOI 700 d, we can backtrack, match them to the closest simulated spectrum and then match that to a model," Engelmann-Suissa said in the same statement. "It's exciting because no matter what we find out about the planet, it’s going to look completely different from what we have here on Earth."

Gilbert, Rodriguez and Engelmann-Suissa presented their results today in Honolulu at the 235th meeting of the American Astronomical Society (AAS). Their papers have also been submitted to scientific journals.

Other exciting TESS news came out at AAS today as well. For example, mission team members also announced TESS' first circumbinary planet — a world with two suns in its sky — and revealed that the bright star Alpha Draconis and its dimmer companion mutually eclipse each other.