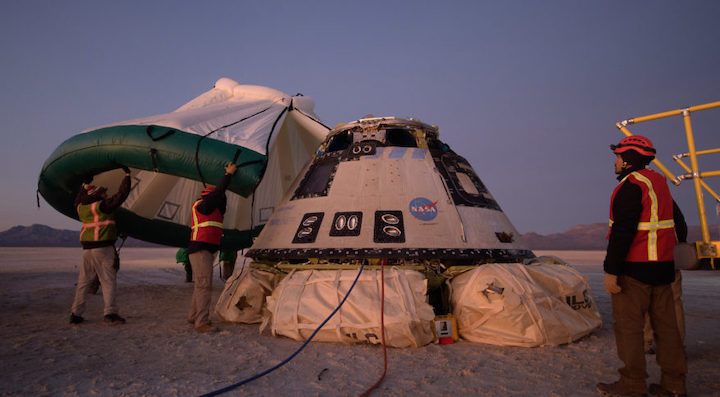 SANTA FE, N.M. — The Boeing CST-100 Starliner commercial crew vehicle that flew an abbreviated test flight this month appears to be in good condition as an investigation into the timer problem that shortened the flight continues.

In a Dec. 28 update, Boeing said technicians are continuing processing of the Starliner vehicle that landed Dec. 22 at White Sands Missile Range after a two-day uncrewed test flight. The spacecraft, christened “Calypso” by NASA astronaut Sunita Williams after landing, will be transported back to Boeing’s facilities at the Kennedy Space Center in Florida after the first of the year.

Boeing emphasized the good condition of the spacecraft, which showed “little scorching” from reentry and used only a fraction of its onboard propellant reserved for reentry, which the company said confirmed aerodynamic models of the spacecraft. The interior of the Starliner cabin appeared the same after landing as it did before its Dec. 20 launch from Cape Canaveral, the company noted, evidence that “the Starliner’s fully operational life support system functioned as intended and the layout of the interior is well-suited to support crew members in the future.”

The statement, though, provided no updates on the timer problem that turned what was originally an eight-day mission into a two-day one without a planned docking at the International Space Station. The spacecraft’s mission elapsed timer, which is set by communicating with its Atlas 5 rocket prior to liftoff, was off by 11 hours. That caused the spacecraft to think it was on the wrong phase of its mission after separation from the rocket’s upper stage, triggering thruster firings that used excessive amounts of fuel until ground controllers could take over and turn off the thrusters.

Why the timer was off, particularly by such a large amount, any why it wasn’t detected prior to launch is not known. “If I knew, it wouldn’t have happened,” said Jim Chilton, senior vice president for Boeing’s space and launch division, at a Dec. 21 briefing. “We are surprised. A very large body of integrated tests, approved by NASA, didn’t surface this.”

After landing, NASA leadership stated that the problem, once understood and corrected, would not necessarily prevent Boeing from proceeding with a crewed test flight. “It is not something that is going to prevent us from moving forward quickly,” NASA Administrator Jim Bridenstine said at a post-landing briefing Dec. 22. “We can still move forward quickly. We can get it fixed.” He also suggested, though, that the timer problem might lead to a more thorough review of the Starliner’s overall flight software or other systems.

One returned to Florida, the Starliner named Calypso will be refurbished for Boeing’s first post-certification, or operational, mission to the ISS. That mission will carry Williams and fellow NASA astronaut Josh Cassada along with two astronauts yet to be assigned from other ISS partners.