Companies are sending massive, high-altitude balloons to the stratosphere to snap images of Earth with unprecedented resolution. Say cheese! 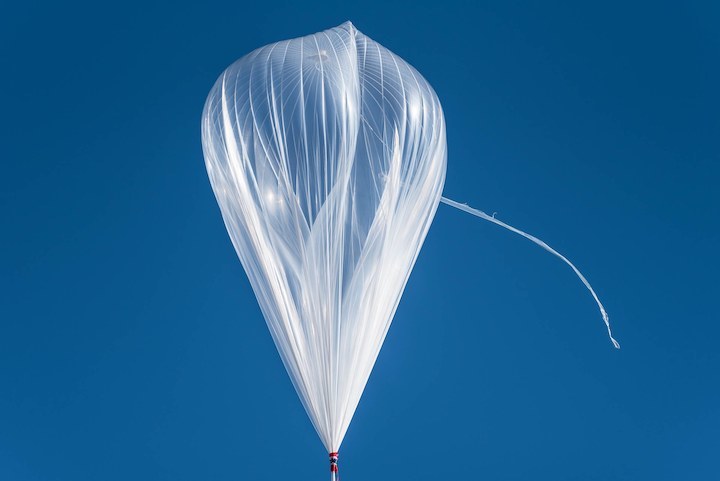 It’s a brisk December morning at Spaceport Tucson, America’s premiere (only?) dedicated launch pad for stratospheric balloons, and a small army of technicians in reflective vests is milling around on the concrete and thawing out after a long, cold night. Nearby, a white metal tripod the size of a smart car is tethered to two dozen solar panels and hundreds of feet of clear plastic that stretches across the pad.

This alien-looking contraption is referred to as a “stratollite,” a portmanteau of “stratospheric satellite,” operated by a company called World View Enterprises. It’s a finely honed surveillance device outfitted with a suite of sensors and a camera sensitive enough to detect people standing on the ground from the edge of space. The stratollite travels by virtue of two balloons, one filled with helium to provide lift, and the other with pressurized air, which functions as a steering system. By the time the contraption reaches peak altitude about 14 miles above sea level, the helium balloon will have grown large enough to comfortably encompass a football field. But in its deflated state, the expanse of plastic brings to mind the sloughed-off skin of the rattlesnakes that call the surrounding Arizona desert home.

Most of the crew has been on site at Spaceport Tucson since 2 AM preparing for World View’s twelfth and final launch of the year. Things are looking good: The sun and a waning gibbous moon compete for attention in a nearly cloudless sky, and an aerostat tethered close to the pad registers almost no wind. You could hardly ask for better conditions to launch the thousand-pound stratollite on a month-and-a-half sojourn at the edge of space. Mission control gives the green light to start inflation, a process that takes just a few minutes but uses enough helium to fill more than one million party balloons.

At World View headquarters, just across from the launch pad, mission control gives the all clear. A technician jogs across the pad, pulls the pin anchoring the stratollite, and sidesteps the craft as it gracefully begins its journey to the edge of space. 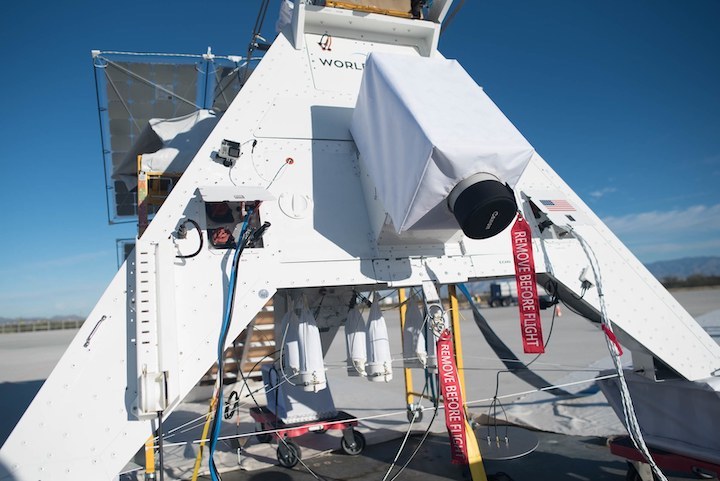 Once the stratollite rises to its peak altitude, it rides the wind for weeks on end, tracing spaghetti-like patterns over the American southwest. A condenser in the stratollite sucks in the sparse air in the upper atmosphere and pumps it into the second, “superpressure” balloon attached beneath the helium balloon. The pressurized air is denser than the helium, so the superpressure balloon acts as a weight. To lower the stratollite’s altitude, you increase the pressure, and vice versa to climb higher.

Founded in 2012 by Taber MacCallum and Jane Poynter of Biosphere 2 fame, World View was originally conceived as a platform for human journeys to the upper stratosphere. Given that only a handful of people have piloted stratospheric balloons and lived to tell the tale, it was an ambitious goal—but the company had the technical chops to back it up. In 2014, MacCallum and Poynter worked together on a mission to send Google executive Alan Eustace on a record-breaking space-diving journey to 136,000 feet suspended beneath a stratospheric balloon.

But it wasn’t at all clear there was enough demand for ferrying humans to the upper stratosphere, so in February, World View tapped Ryan Hartman, the former president and CEO of the drone company Insitu, to retool the company as a data services platform. The idea is to use long-lasting stratospheric balloons to collect high-resolution images of Earth and sell this data to the government and private companies.

Given his background in drones, Hartman is intimately familiar with the concept of Earth surveillance as a service. He says World View aims to fill a niche that can’t be met by more conventional technologies like drones and satellites, which involve compromises in the quality of images, the area these images cover, and the frequency with which images are collected. Stratospheric balloons promise cheap access to incredibly high-resolution images that can be collected anywhere on Earth. Using off-the-shelf imaging hardware, World View can take photos with 15-centimeter resolution from 75,000 feet, and its custom-made cameras will soon be capable of 5 centimeters. 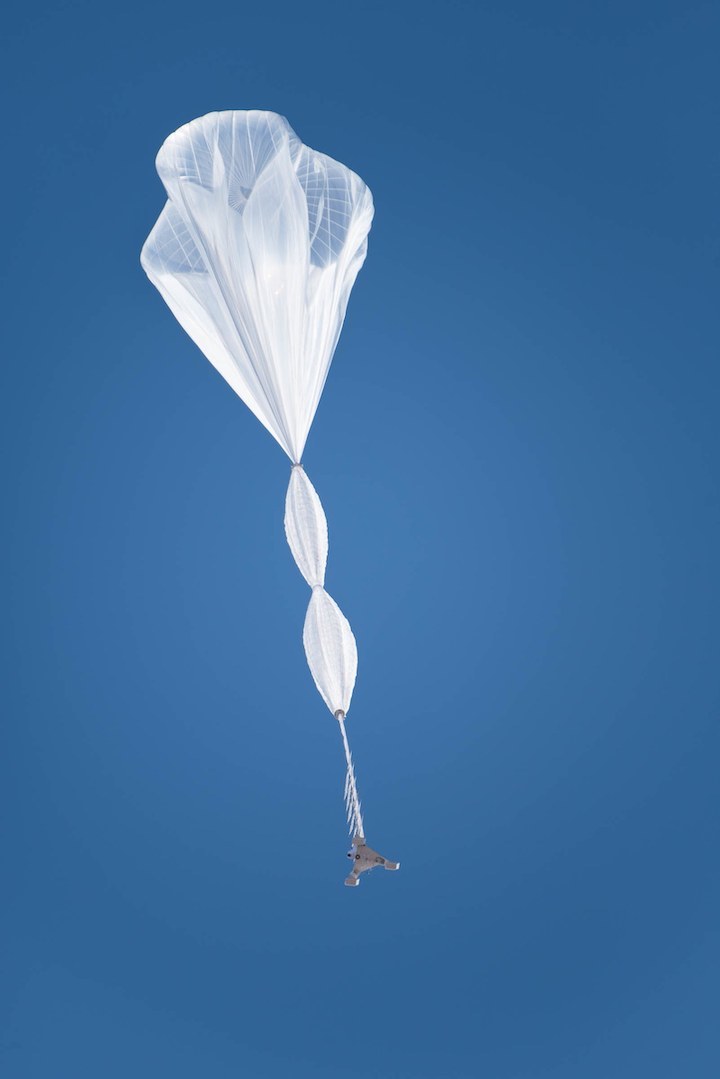 The two-chambered superpressure balloon under the helium balloon remains deflated until the stratollite reaches its maximum altitude and is then rapidly pressurized with air.PHOTOGRAPH: DANIEL OBERHAUS

According to Hartman, World View’s system is sensitive enough to tell whether a person on the ground is “holding a shovel or a gun.” Unsurprisingly, perhaps, World View has attracted the interest of the US Department of Defense, which Hartman says will be one of the company’s first customers when it starts selling its data next year. He says the company has also received a lot of attention from the energy sector, which is interested in using the image data to monitor its oil and gas wells, transmission lines, and other critical assets.

Hartman is aware that not everyone will like the idea of a balloon-borne eye in the sky, but he is adamant that World View’s systems will be used responsibly. “This is not going to be a solution that is used for Big Brother-type applications,” he says. “The fastest way for us to become an over-regulated environment is to be irresponsible with the use of the technology.”

For example, he says the company isn’t going to let clients just “park a balloon over a city, open up the shutter, and have fun,” even though he says “there’d be a lot of people interested” in this type of dragnet surveillance. Instead, Hartman says he’d prefer to hear from customers who are interested in atmospheric research or climate science, which he sees as one of the stratollite’s most promising applications. World View collects reams of atmospheric data each flight, which the company is using to build what Hartman claims will be the most accurate model of stratospheric winds in existence.

In the future, Hartman envisions a global constellation of stratollites that communicate with each other to form a stratospheric mesh network providing real-time coverage of most of the Earth’s surface. The company is also working on other data-gathering devices like synthetic aperture radar, which can create 3D images of objects on the surface.

The idea of a constellation of stratospheric balloons isn’t new—the US military floated the idea back in the ’90s—but technology has finally matured to the point that they’re actually possible. World View’s December launch marks the first time the company has had more than one balloon in the air at a time, if only for a few days. By the time you’re reading this, its other stratollite will have returned to the surface under a steerable parachute after nearly seven weeks in the stratosphere. 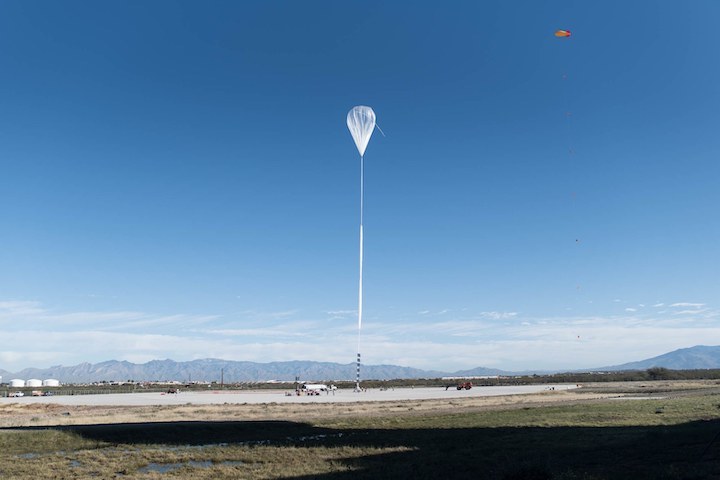 World View isn’t the only company looking to mine data at the edge of space. In 2016, Rema Matevosyan, an applied mathematician, cofounded Near Space Labs, which also collects high-resolution imagery from the upper stratosphere. The company has recently started testing its six-legged observation platforms, known as Swifts, on high altitude flights over Austin and Philadelphia. The Swifts are smaller and lighter than World View’s stratollites and so far have only spent a few days at altitude, a limitation imposed by their batteries. Each Swift is outfitted with a steerable imaging device capable of 30 centimeter resolution, but Matevosyan says the company’s next-generation cameras will take images with 10-centimeter resolution.

“We’re building a high-frequency, high-resolution data set that has never existed before,” Matevosyan says, alluding to the company’s new API that allows anyone to access its imagery data. “This is an entirely new approach to remote sensing.”

Both World View and Near Space Labs are banking on the world’s insatiable appetite for data to keep their companies aloft. But given their new spin on high altitude surveillance, neither can be sure just how big the market is—or what their balloon platforms might be used for next.