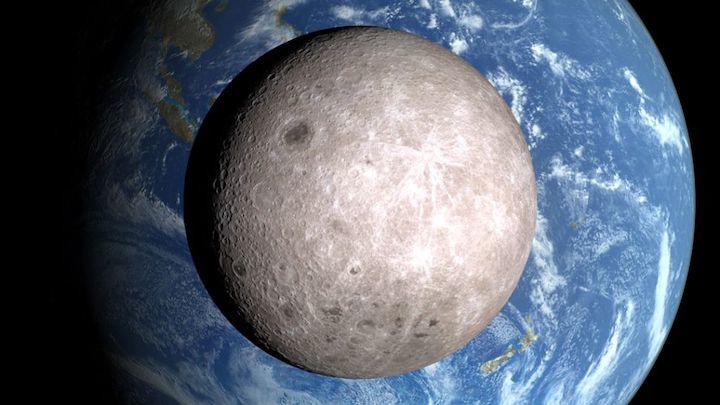 An artist's depiction of the far side of the moon and Earth.
(Image: © NASA's Scientific Visualization Studio)

Everyone seems to want to go to the moon. Before they do, radio astronomers would like them to think about what wavelengths they use to light the way.

For more than a century, Earth has been haloed by constant invisible flashes of radio waves, a glow of light created by human technology on the ground and in orbit. These pulses of light ferry our hopes and dreams — and the random hiccups of electronics — around the world. But the haze of these radio signals blocks scientists trying to answer two crucial questions about the universe. Only one place in our solar system is unaffected, the far side of the moon, but if lunar adventurers aren't careful, radio waves could invade this darkness.

"In a sense, the moon is a fresh start," Mike Garrett, director of the Jodrell Bank Centre for Astrophysics and co-chair of the International Academy of Astronautics' permanent SETI committee, told Space.com. "The Earth has been putting up radio communications systems for more than 100 years, and things have evolved in a slow but also not completely regulated way."

For half a century, astronomers have recognized the far side of the moon's radio quiet, but they didn't particularly worry about losing it. Lunar-mission ambitions weren't of the scope to creep into the darkness, and astronomers had plenty of other science to keep them occupied.

"It was a bit of a boring idea because no one knew what you would do with very low-frequency radio," Martin Elvis, an astrophysicist at Harvard University, told Space.com. "Now, that's changed." Scientists realized that long radio waves hold the secrets of what the universe was like before stars began to form. Specifically, astronomers realized that primordial hydrogen — the most interesting thing to see before star formation — emits a signal that, after an odyssey across most of the universe, is stretched into low-frequency radio waves.

And now, urgency is on the scene as well as curiosity, as scientists watch governments and private entities set their sights on the moon. This year was the first to see three different countries attempt to land on the moon; China's was the only successful landing, setting down the Chang'e-4 mission on the far side. And although NASA's modern lunar dreams are still in the planning stages, the agency is energetically recruiting companies to come on board and pursue their own agendas at the moon.

Additional time pressure comes from the slow pace of spaceflight engineering and the still slower one of writing regulations. "It's really now that the conversation has to take place," Garrett said, pointing out that communications systems are set in stone long before launch. "If you don't really start agreeing on things now, there will be things that are going to the moon where the communications systems are essentially already designed."

The burst of interest in the moon has scientists of all disciplines worried about potentially irreplaceable data encoded in and around the moon, Michelle Hanlon, a lawyer at the University of Mississippi School of Law specializing in outer space, told Space.com. "There's definitely a new sense of urgency and I think much more because of the growth and the potential of the commercial sector," she said. "I think there's a fear on the part of scientists that everything's going to be exploited."

Darkness — darkness in terms of light that humans can't see with their own eyes, even — may not seem like an obvious resource to exploit. But with that darkness comes the possibility of enlightening data, not only about the time before stars formed, but also about the state of technology in the modern universe.

Scientists focused on the search for extraterrestrial intelligence, or SETI, value the very same type of radio signals as those created by hydrogen's antics: the theory being that if even cosmic dullards like us can figure out the importance of that type of light, it's a good way to reach out to the universe. "All the radio astronomers, whether human or alien, certainly know about this basic frequency line," Claudio Maccone, director for scientific space exploration at the International Academy of Astronautics and chair of that group's permanent SETI committee, told Space.com. "A 'magic line,' if you want to put it in that way," he added.

"Well, so far there was nothing magic, because we didn't find extraterrestrials," Maccone admitted. "Anyway, we keep hoping. We keep our fingers crossed."

But both potential revelations of low-frequency astronomy could evaporate accidentally, without anyone necessarily intending to interfere with science. Any human mission to the lunar far side would bring technology that leaked radio waves. "It doesn't really matter what people are doing, whether they're mining or whether they're in a lunar hotel or whatever," Garrett said. "As soon as you have people, you have a requirement for communications."

That's why Maccone has been trying to get the international community to agree to protect a swath of the lunar far side, nestled well within the radio-quiet zone. At the heart of the region he wants to protect is Daedalus Crater; 50 miles (80 kilometers) across, it's additionally buffered from interference by its steep walls. Within this impact scar named for an ancient engineer, Maccone said he hopes scientists could one day lay out a radio-sensitive array designed for cosmology and SETI research — if the radio darkness remains.

But Maccone and others worry that other moongoers will beat radio astronomers to Daedalus Crater and other promising spots. "We'll end up with maybe two places which are the best for putting a far-side array on the full scale that eventually will be wanted. Who says that's for astronomers?" Elvis said. "As soon as you have someone who goes [to these areas] without thinking about the radiation leakage from their equipment, they will pollute that zone."

Whether humans or robots, those lunar visitors likely won't go maliciously, he said. "There's not a lot of reason to go to the far side except for this," Elvis said, unless some new resource opportunity is discovered there. But if moon missions want the same sort of orbital communications and navigations infrastructurethat we are so used to on Earth, technology will be all over the far side of the moon even if humans are not, he said. "Even if nobody wants to be on the far side, the satellites have to keep going."

So, the other half of radio protection is designing satellites that would operate at frequencies far from the magic band of primordial hydrogen. It's a requirement that astronomers didn't know to ask for when humans began developing radio technology on Earth. Eventually, a group called the International Telecommunications Union formed within the United Nations to oversee who uses what wavelengths for what purposes; that organization now protects certain bands for science.

Radio astronomers hope for a similar group to serve a similar role at the moon, doing so much earlier in the development process — and, of course, with a sympathetic eye to the whimsy of light from primordial hydrogen. "We want to be using the resources on the moon. We want to be back on the moon. I definitely don't want to stop exploration of the moon," Garrett said. "I would only ask that we try and have some regulation of how we do that."

It's an opportunity to break from terrestrial tradition, he added. "We can go back to the moon and treat it exactly the same way we've treated the Earth, which is pretty badly in all honesty," Garrett said. Or, we can do something new, he added.

"How can we continue to use the moon as a place to search for life without contaminating the moon itself before that search has even begun?" he said. "I think these are things that are worth thinking about in addition to all the exciting programs that people want to do in terms of the industrialization of the moon."