A question that has long puzzled scientists is how our Milky Way galaxy which has an elegant spiral shape with long arms, took this form.

Universities Space Research Association today announced that new observations of another galaxy are shedding light on how spiral-shaped galaxies like our own get their iconic shape. 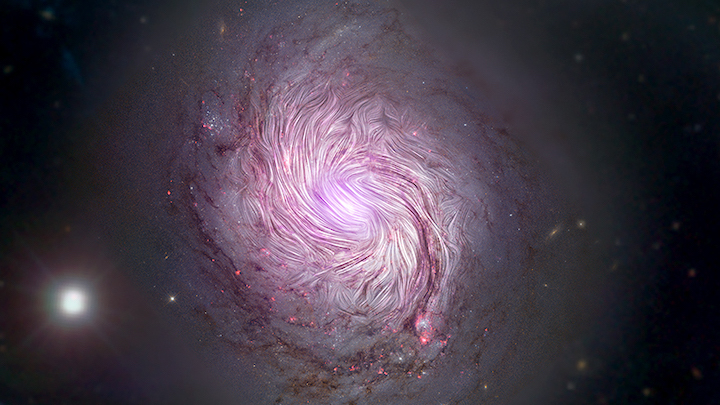 Magnetic fields in NGC 1086, or M77, are shown as streamlines over a visible light and X-ray composite image of the galaxy from the Hubble Space Telescope, The Nuclear Spectroscopic Array, and the Sloan Digital Sky Survey. The magnetic fields align along the entire length of the massive spiral arms — 24,000 light years across (0.8 kiloparsecs) — implying that the gravitational forces that created the galaxy’s shape are also compressing the galaxy’s magnetic field. This supports the leading theory of how the spiral arms are forced into their iconic shape known as “density wave theory.” SOFIA studied the galaxy using far-infrared light (89 microns) to reveal facets of its magnetic fields that previous observations using visible and radio telescopes could not detect. Image credit: NASA/SOFIA; NASA/JPL-Caltech/Roma Tre Univ.

According to research from the Stratospheric Observatory for Infrared Astronomy (SOFIA), magnetic fields play a strong role in shaping these galaxies. “Magnetic fields are invisible, but they may influence the evolution of a galaxy,” said Dr. Enrique Lopez-Rodriguez, a Universities Space Research Association scientist at the SOFIA Science Center at NASA’s Ames Research Center in California’s Silicon Valley. “We have a pretty good understanding of how gravity affects galactic structures, but we’re just starting to learn the role magnetic fields play.”

Scientists measured magnetic fields along the spiral arms of the galaxy called NGC 1068, or M77. The fields are shown as streamlines that closely follow the circling arms.

The M77 galaxy is located 47 million light years away in the constellation Cetus. It has a supermassive active black hole at its center that is twice as massive as the black hole at the heart of our Milky Way galaxy. The swirling arms are filled with dust, gas and areas of intense star formation called starbursts.

SOFIA’s infrared observations reveal what human eyes cannot: magnetic fields that closely follow the newborn-star-filled spiral arms. This supports the leading theory of how these arms are forced into their iconic shape known as “density wave theory.” It states that dust, gas and stars in the arms are not fixed in place like blades on a fan. Instead, the material moves along the arms as gravity compresses it, like items on a conveyor belt.

The magnetic field alignment stretches across the entire length of the massive, arms — approximately 24,000 light years across. This implies that the gravitational forces that created the galaxy’s spiral shape are also compressing its magnetic field, supporting the density wave theory. The results are published in the Astrophysical Journal.

“This is the first time we’ve seen magnetic fields aligned at such large scales with current star birth in the spiral arms,” said Lopez-Rodriquez. “It’s always exciting to have observational evidence like this from SOFIA that supports theories.”

Celestial magnetic fields are notoriously difficult to observe. SOFIA’s newest instrument, the High-resolution Airborne Wideband Camera-Plus, or HAWC+, uses far-infrared light to observe celestial dust grains, which align perpendicular to magnetic field lines. From these results, astronomers can infer the shape and direction of the otherwise invisible magnetic field. Far-infrared light provides key information about magnetic fields because the signal is not contaminated by emission from other mechanisms, such as scattered visible light and radiation from high-energy particles. SOFIA’s ability to study the galaxy with far infrared light , specifically at the 89 micron wavelength, revealed previously unknown facets of its magnetic fields.

Further observations such as these from SOFIA  are necessary to understand how magnetic fields influence the formation and evolution of other types of galaxies, such as those with irregular shapes.

SOFIA, the Stratospheric Observatory for Infrared Astronomy, is a Boeing 747SP jetliner modified to carry a 106-inch diameter telescope. It is a joint project of NASA and the German Aerospace Center, DLR. NASA’s Ames Research Center in California’s Silicon Valley manages the SOFIA program, science and mission operations in cooperation with the Universities Space Research Association headquartered in Columbia, Maryland, and the German SOFIA Institute (DSI) at the University of Stuttgart. The aircraft is maintained and operated from NASA’s Armstrong Flight Research Center Building 703, in Palmdale, California. The HAWC+ instrument was developed and delivered to NASA by a multi-institution team led by the Jet Propulsion Laboratory in Pasadena.

Founded in 1969, under the auspices of the National Academy of Sciences at the request of the U.S. Government, the Universities Space Research Association (USRA) is a nonprofit corporation chartered to advance space-related science, technology and engineering. USRA operates scientific institutes and facilities, and conducts other major research and educational programs, under Federal funding. USRA engages the university community and employs in-house scientific leadership, innovative research and development, and project management expertise. More information about USRA is available at www.usra.edu.

Astronomie - How Does Our Milky Way Galaxy Get its Spiral Form?
431 Views
Created with page4