Starlink and other megaconstellation satellites pose a real problem to astronomy of every stripe — from backyard stargazing to professional astronomy.

By now many of us have seen the photo of the Starlink satellite train launched by SpaceX crossing the field of view of a professional telescope, and perhaps also the video of Starlinks interfering with a meteor-monitoring video camera.

The shots are dramatic — even shocking — but they’re also a bit misleading. The real problems that Starlink and other so-called megaconstellation satellites pose are actually more insidious. 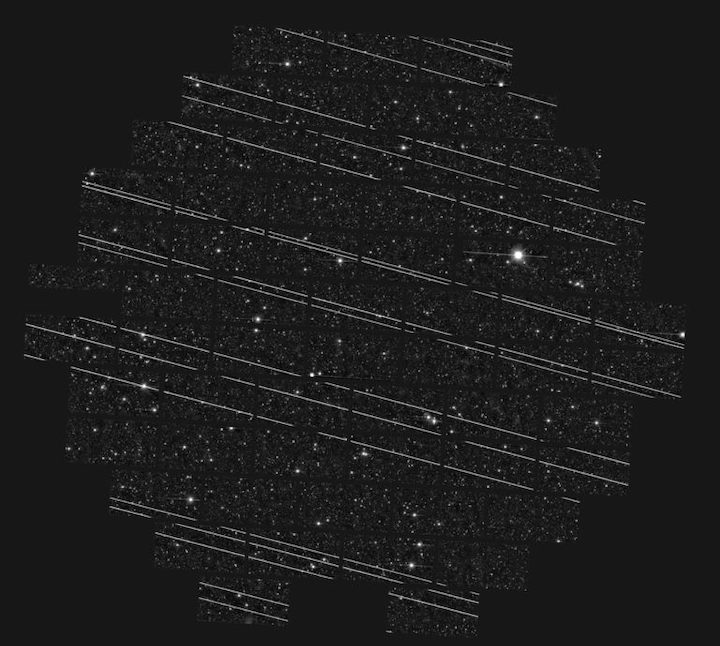 Early morning on Monday, November 18th, Cliff Johnson (Northwestern University) and colleagues took this image using the Dark Energy Camera on the 4-meter Blanco Telescope at the Cerro Tololo Inter-American Observatory. Nineteen Starlink satellite trails crossed the image during the six-minute exposure. The image was taken as part of the DELVE survey, which is mapping the outskirts of the Magellanic Clouds, as well as much of the southern sky in search of new dwarf galaxies orbiting the Clouds or the Milky Way.
DELVE Survey / CTIO / AURA / NSF

As with the last Starlink launch in May this year, the most recent launch placed 60 satellites in a staging orbit. The staging orbit for the first 60 was 440 km (273 miles); for the ones just launched in November, it was only 280 km. This is the altitude where SpaceX first communicates with and checks out its satellites, and it’s low on purpose. If a satellite fails, and several from the May launch did fail, then it can passively de-orbit from this lower altitude and re-enter Earth’s atmosphere fairly quickly, rather than remaining on as space junk. SpaceX claims the failed satellites from the May launch will burn up within a year; presumably, the more recently launched satellites will deorbit even more quickly.

What this means for observers is that, until the satellites have undergone testing and have moved to higher altitudes, they’re going to look really bright. The satellites launched in May first appeared around magnitude 2, similar in brightness to Polaris, but by July they appeared around magnitude 6, just within reach of the unaided eye at dark-sky sites. A similar pattern should occur for the second batch.

What’s more, the satellites are all bunched together following their deployment, like a wagon train of stars moving through the sky. That lends some serious drama to any photograph, of course. But they won’t stay in that configuration for long. For their first 1,584 satellites, SpaceX has FCC approval for 24 orbital planes of 66 satellites each. So, once they’ve started operations, if you’re looking in any given orbital plane, you’ll see satellites spread out 22 minutes apart.

The Global Meteor Network posted this video of the Alpha Monocerotid meteor shower. Starlink satellites start streaking across the frame starting at the 2:12 mark.

Finally, contrary to headlines claiming the ruin of astronomical exposures, the passage of the Starlink train over the Dark Energy Camera posed only a modest loss to the astronomers involved. “Although we never want to lose pixels (and valuable data), the impact to this exposure was to approximately double the number of bad pixels, and the overall effect was moderate,” says Cliff Johnson (Northwestern University), an astronomer involved in the observations.

That all sounds like good news, right? Except that each batch of satellites spends perhaps 5% of its lifetime reaching operational altitude. Depending on how many launches are occurring — and SpaceX and another company, OneWeb, are both aiming for a high frequency of launches — the satellite train could become a more common sight.

The Problem with Satellites

Neither can the nearest precedent we have, the 66-satellite Iridium constellation that enables satellite phones and pagers. These satellites appear at similar magnitudes to the Starlink satellites and have been around more than 20 years. Iridium demonstrates that the mere existence of a few magnitude-6 satellites is not an issue. Rather, it's a numbers game: If SpaceX fills out its planned 12,000-satellite Starlink constellation, or its proposed 42,000-satellite constellation (though the latter plan doesn’t have international or federal approval yet), astronomy will change forever — though maybe not quite in the way pictured above.

This simulation, by Michael Vlasov and published on DarkySkyWatch, shows what our future night sky might actually look like (with a few simplifying assumptions). It’s not as dramatic as shots of the Starlink train, but it’s no less problematic for astronomy.

At operational altitudes, the satellites will be fainter and more spread out than the photos and videos that have made the rounds online, making them less obvious to the unaided eye — but they'll be plenty visible to cameras and other astronomical instruments.

The upshot is, even after megaconstellation satellites fade, they'll be distracting for visual observers in dark-sky locations. They'll also be problematic for nightscape photographers, who can't easily process out satellite trails. And they'll pose a real dilemma for professional astronomy, where wide and deep surveys to study everything from cosmology to near-Earth asteroids are becoming the norm.

We take a deep dive into the subject of megaconstellation satellites in the March 2020 issue of Sky & Telescope. If you're an astronomer or stargazer, or even if you just want to be, you'll want to check this article out to learn the full gamut of unintended consequences for visual astronomy, astrophotography, professional optical astronomy, professional radio astronomy, and space debris. This issue will be on newsstands in late January.

What Will the Future Hold?

SpaceX, and to some extent OneWeb, are already in conversation with professional astronomers, largely as a result of the furor following the May Starlink launch. Due in part to these conversations, SpaceX has announced its intention to paint parts of its future Starlink satellites a matte black, which could decrease their visual magnitude by as much as 3.5. (The announcement came shortly before the November launch, and the date of the black-satellite rollout remains under wraps for now.)

OneWeb, on the other hand, has not mentioned any plans for utilizing black paint, focusing instead on placing its smaller satellites in higher, 1,200-km orbits. They'll be a little fainter there, by two or three magnitudes, but not enough to prevent consequences. At higher altitudes, they'll also be visible for longer periods at night.

Given that every aerospace company could take a different approach to the problem facing astronomy, it’s clear that if we want to protect the night sky, we can’t rely on goodwill alone. Let’s just make sure that we engage using facts, not frenzy.

“The best grassroots action that Sky & Telescope readers can take at this point is to educate themselves about the verifiable and likely potential impacts of this coming technological leap and then work to educate their communities and elected leaders about it,” says Deputy Executive Officer Joel Parriott at the American Astronomical Society.