WASHINGTON — "Phantom women" dummies will make a trip around the moon in 2020 or so on a special mission: to protect all astronauts from radiation.

Each dummy will take up one seat in the Orion spacecraft during Artemis 1, a crewless NASA test mission that is integral to the agency's plans to land the first woman and the next man on the moon by 2024. One of the dummies, named Zohar, will sport a radiation-shielding vest called StemRad. The other, Helga, will go without protection. They are both "phantom" dummies, meaning they will include sensors to measure the amount of radiation coming at them from the sun and from deep space.

Before this moon-bound mission takes off, however, a version of StemRad is already on board the International Space Station, thanks to a launch aboard a Northrop Grumman Cygnus cargo spacecraft in November. If all goes according to plan, astronauts on the orbiting laboratory will perform ergonomics tests with StemRad late this year or in early 2020. This testing will make sure that the 57-lb. (26 kilograms) vest will not interfere with astronauts' day-to-day activities. 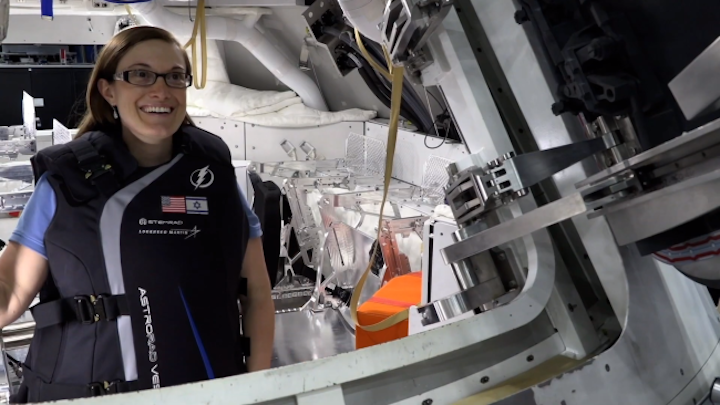 If all goes well, this two-part experiment could culminate with future astronaut crews wearing a version of StemRad during extreme radiation events like strong solar flares. However, no missions are scheduled to fly with the vest yet beyond Artemis 1. The vest is designed to protect humans from radiation-poisoning effects that can lead to many health problems, including sudden death. 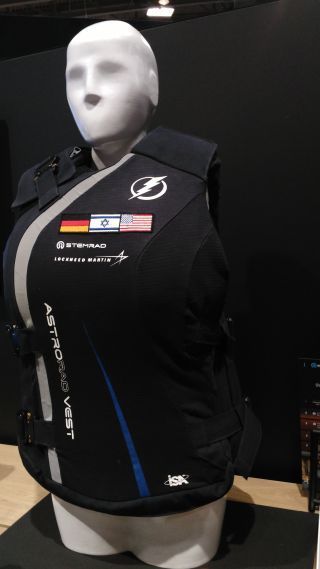 "We are very happy to fly [StemRad] on this mission," Thomas Berger, team leader of the biophysics group at the German Aerospace Center (DLR), told Space.com at the International Astronautical Congress on Oct. 23. Berger is the principal investigator of the dummy test that will fly on Artemis 1, formally known as the Matroshka AstroRad Radiation Experiment (MARE).

Berger said that the team — which includes representatives from the Israeli Space Agency, DLR and Lockheed Martin (among many others) — was grateful to have the opportunity to fly. This investigation will take up a lot of physical space on the Artemis 1 mission, since the dummies will occupy two seats, and the vest is bulky besides.

The "secret sauce" of the vest is protection made of high-density polyethylene, a very popular plastic that is used for everything from bulletproof vests to children's toys. The vest is designed so that the material is much thicker over vital organs and sensitive areas. Berger said that the plastic used is one of the best materials to shield against particle events from the sun and the background radiation of space. There are other alternatives, but they're not nearly as easy to turn into effective clothing.

Polyethylene blocks are already used in the crew sleeping quarters on the American side of the space station to protect astronauts from radiation, Berger said, so it's "not like something totally out of the blue." The Russians, he added, use toilet paper on their side of the complex, which, with their high water content, is good protection against radiation. 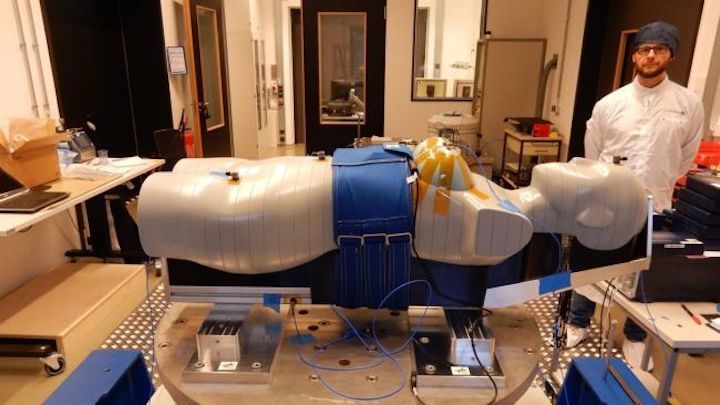 StemRad is meant to protect the parts of the human body that are most sensitive to radiation, which include the breast, stomach, intestines, lungs, bone marrow and ovaries. The version flying on Artemis I is optimized for women's bodies, which may be more sensitive to radiation than men's bodies. But, as Berger said, in practical use, the vest can be easily adjusted to fit both male and female body shapes.