The far side is normally protected from all the radio noise emanating from Earth, but SETI researchers worry that new visitors will gunk it up. 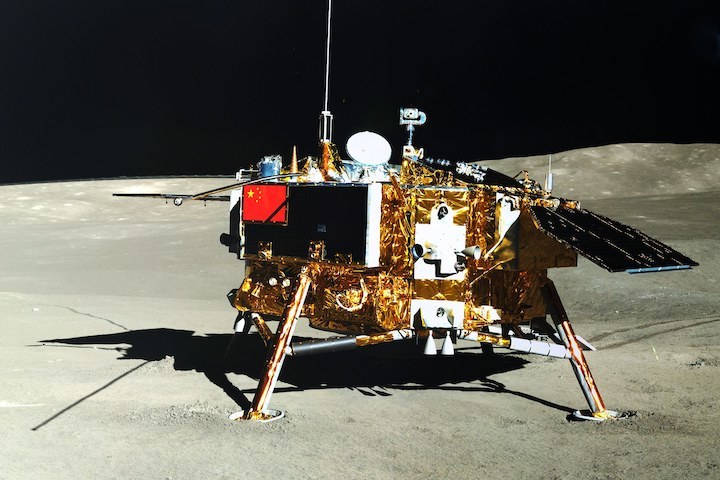 China made history earlier this year when its Chang'e-4 lander became the first spacecraft to land on the far side of the moon. During the two-week lunar days, the lander and its small rover, Yutu 2, beam images and other data to an orbiter for relay back to Earth. Together they’ve furnished planetary scientists with unprecedented access to the backside of our Janus-faced neighbor. But not everyone was thrilled that China crossed into this new lunar frontier, and few have been more vocal about their concerns than the scientists involved in the search for extraterrestrial intelligence.

Last month, the SETI permanent committee of the International Astronautical Association hosted its second round of negotiations about the lunar farside in Washington, DC. The exploration of the moon might seem like an issue outside the purview of this group of professional alien hunters, but the far side of the moon is the most radio quiet place in the inner solar system and they want to keep it that way in case ET calls. Indeed, they argue that the fate of the lunar farside may determine whether we ever detect a signal from an extraterrestrial intelligence.

“At the moment, SETI is not doomed, but it might be doomed in the next 50 years and that’s being optimistic,” says Claudio Maccone, an astrophysicist and the chair of the IAA SETI committee. “We must insist on this topic while there is still time to do something.”

On Earth, radio astronomers must contend with interference from television broadcasts, cell phone signals, satellites, and the atmosphere as they scan the cosmos for faint signals from primordial stars, organic molecules, or intelligent life. This makes the lunar farside an attractive site for future radio telescopes because the moon blocks all the radio signals from Earth. It’s like the difference between stargazing in New York City and stargazing in the middle of the desert—in the city light pollution obscures almost all of the good stuff.

As a hedge against the unchecked proliferation of radio frequency interference, a radio astronomer named Jean Heidmann made the case for a SETI radio base on the far side of the moon back in the mid-’90s. Even before cell phones became common, Heidmann realized that radio interference could eventually become so bad that searching for aliens with radio telescopes would be impossible on Earth. Moving radio observatories to the moon wouldn’t require turning the entire lunar farside into a radio quiet zone, but it would guarantee that at least some portions of the moon are preserved for radio astronomy and the hunt for extraterrestrial intelligence.

Here on Earth, governments could create more radio quiet zones like the kind around the National Radio Astronomy Observatory in Green Bank, West Virginia, but even then we might miss a message from ET. The Earth’s atmosphere starts to block out radio frequencies as you move away from a relatively narrow frequency band called the “microwave window,” so unless ET happens to be transmitting on one of those frequencies we’d struggle to hear it. But the lunar atmosphere is virtually nonexistent, which means radio astronomers would have access to frequencies above and below Earth’s microwave window. And, given the moon’s low gravity environment, astronomers would also be able to build massive radio telescopes that dwarf those found on Earth.

After Heidmann’s death in 2000, Maccone took up the cause of preserving the lunar farside for radio astronomy. He has written several papers on the subject and even gave a presentation to the United Nations, but until recently his pleas have fallen on deaf ears. The reason, Maccone says, is that the issue lacked any urgency. Most national space agencies had neither the funding nor the will to launch a mission to the far side of the moon and billionaires were still struggling just to get a rocket to orbit.

But China’s historic landing on the lunar farside, NASA’s push for a moon base, and the rise of private space companies with their sights set on other planetsseems to have finally caught the radio astronomy community’s attention. In addition to the two lunar farside negotiations organized by the IAA, the Royal Society is hosting a two-day conference dedicated to the issue next year.

There are several possible approaches to keeping the lunar farside as quiet as possible short of an outright ban on communication with spacecraft. The most bothersome source of interference is unintentional radio noise from spacecraft electronics, which could be avoided by asking moon-bound missions to include strong electromagnetic shielding for their spacecraft. Alternatively, missions could use laser communications to avoid drowning out the radio frequencies.

Although each of these solutions requires the spacecraft operator to act in good faith, there is some precedent here. Behavior in low Earth orbit is mostly governed by voluntary agreements based upon technical best practices and there’s no reason why this norms-based system couldn’t also be extended to the moon. But perhaps the best way to preserve the lunar farside for radio astronomy is to go ahead and build an observatory there—which is exactly what NASA is thinking about doing.

Jack Burns is an astrophysicist at University of Colorado Boulder and has been pushing for a radio astronomy observatory on the lunar farside for decades. Unlike Maccone, he’s not in the business of hunting for little green men. Instead, he wants to tap into the ultra low frequency end of the radio spectrum that is blocked by Earth’s atmosphere, which would allow astronomers to study the formation of the earliest stars and galaxies in the universe.

Earlier this year, Burns and his colleagues wrapped up a six-month study for NASA that examined the feasibility of a small satellite mission to the moon. Known as the Dark Ages Polarimetry Pathfinder or Dapper, this satellite would orbit the moon and look for signals from the very early universe as it passed over the lunar farside.

If Dapper is selected by NASA for a mission it would be the first small step toward making lunar farside radio astronomy a reality. “What we’re intending to do is break open this field for the first time,” Burns says. If Dapper goes well, it would lay the foundation for an even more ambitious mission known as Farside. As detailed in a conceptual study Burns conducted for NASA, Farside would be a bonafide radio observatory on the surface of the far side of the moon that consists of 128 antennas literally rolled out by robots.

For now, both of these missions are still in the engineering design phase and there’s no guarantee they’ll ever come to fruition. But if NASA gives Burns and his colleagues the green light, they could both fly by the mid-2020s.

Burns is less pessimistic than Maccone that the radio silence on the lunar farside will be totally shattered by future public and private moonshots. But he also acknowledged that it would be wise to start thinking about how we will manage the lunar radio spectrum sooner rather than later. We don’t know what cosmic mysteries await us on the lunar farside, but we’ll never find out without a little peace and quiet.