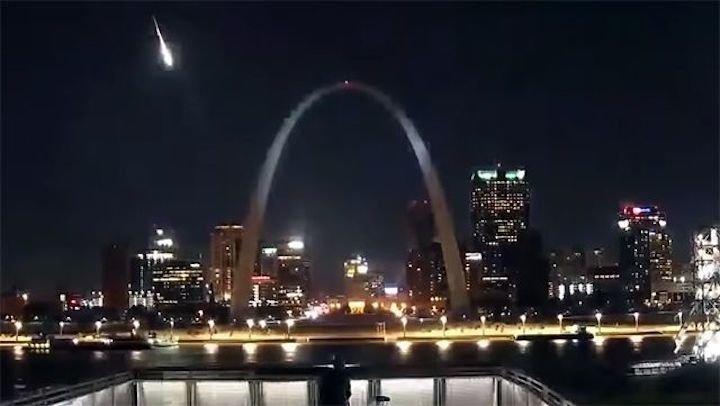 The giant flash of light came from a meteor traveling east to west across the state. It was seen over Missouri around 8:52 p.m. local time (0252 GMT), according to the American Meteor Society (AMS). The meteor was clearly visible in this stunning video from EarthCam's St. Louis location. You can see here on YouTube.

More than 120 sightings were reported to AMS. Reports came from multiple cities in Missouri, including St. Louis and Columbia, which are approximately 125 miles (200 kilometers) apart. The meteor is believed to have ended its flight somewhere near Wellsville, Missouri, according to AMS.

While the meteor was mostly seen in Missouri, observations were also reported from Indiana, Illinois, Kansas, Minnesota, Nevada, Nebraska, Oklahoma and Wisconsin. In addition to seeing a bright flash of light, many people also reported hearing a loud boom as the meteor streaked across the sky.

This video from AMS includes several views of the meteor that were captured by smart home security cameras in the area. The video also contains footage from EarthCam's St. Louis camera, which spotted the meteor passing behind the Gateway Arch monument, according to the statement from AMS.

The National Weather Service in St. Louis also shared a video of the meteor on Twitter and stated that it was unknown whether or not it touched down on Earth.