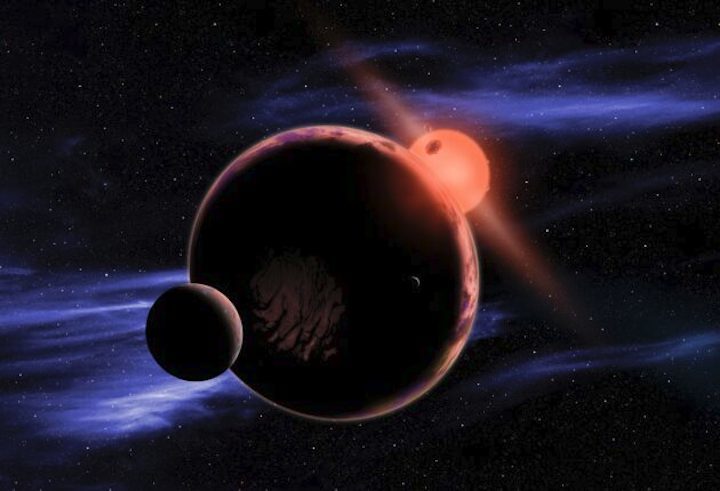 Astronomers have identified thousands of stars that have planets, and that number could mushroom even faster when waves of next-generation telescopes come online. But where are the best places to look for life?

A newly released study focuses on the most plentiful category of stars in our Milky Way galaxy — M-dwarf stars, also known as red dwarfs — and delivers good news as well as bad news for astrobiologists.

The good news is that 3-D climate modeling of atmospheric chemistry can produce a more comprehensive assessment of a planet’s potential habitability.

On a basic level, a planetary system’s habitable zone is defined as the doughnut-shaped region surrounding a star that gets just the right amount of radiation to keep water in a liquid state, rather than having it boil off or freeze.

Astrobiologists start with that criterion because on Earth, some form of life can be found virtually anywhere liquid water exists. But for alien stars, and particularly M-dwarfs, the situation is more complex.

The new findings, due for publication this week in the Astrophysical Journal, support the view that planets orbiting active M-dwarf stars are vulnerable to losing significant amounts of water, due to vaporization caused by ultraviolet radiation.

What’s more, planets with too-thin layers of ozone are likely to let too much UV light pass through their atmospheres. That radiation would deal a killing blow to life as we know it, even if there’s liquid water at the surface.

The computer model described in the Astrophysical Journal paper takes advantage of 3-D climate modeling for chemical reactions in alien atmospheres. That approach literally adds another dimension to the process for determining habitability.

“3-D photochemistry plays a huge role because it provides heating or cooling, which can affect the thermodynamics and perhaps the atmospheric composition of a planetary system,” study lead author Howard Chen, a Ph.D. candidate at Northwestern University, said in a news release.

“These kinds of models have not really been used at all in the exoplanet literature studying rocky planets because they are so computationally expensive,” Chen said. “Other photochemical models studying much larger planets, such as gas giants and hot Jupiters, already show that one cannot neglect chemistry when investigating climate.”

The team’s findings are likely to dim hopes of finding life on Proxima Centauri b, the closest planet beyond our solar system. Proxima b is technically inside the habitable zone of its parent star, an M-dwarf, but that star throws off strong flares.

Astronomers have already noted that Proxima b’s radiation environment could be problematic. The same goes for TRAPPIST-1 e, another M-dwarf exoplanet that has previously been judged as potentially habitable. The newly published paper reinforces that pessimistic view.

“It doesn’t necessarily preclude habitability on Proxima b and TRAPPIST-1e like planets … but it does further the idea that the stellar radiation environment for planets around M-dwarf stars may make it very challenging to maintain water vapor on terrestrial planets,” said study co-author Eric Wolf, an astronomer at the University of Colorado at Boulder.

Wolf is affiliated with the NASA Astrobiology Institute’s Virtual Planetary Laboratory, which is headquartered at the University of Washington. He and his colleagues have devoted a lot of attention to the conditions likely to exist on planets around M-dwarf stars, which make up about 70 percent of the Milky Way’s stellar population.

It’s not all bad news, Wolf said. “Howard’s paper also tells us that ideal planet targets will be those that are found around UV-quiet stars, and more so, stars have been quiet over their lifetimes,” he said.

In the years to come, NASA’s James Webb Space Telescope and other next-generation observatories are expected to accelerate the pace of planet discovery, and even make it possible to analyze the atmospheres of alien planets.

“There are lots of stars and planets out there,” said the study’s senior author, Northwestern University planetary scientist Daniel Horton. “Our study can help limit the number of places we have to point our telescopes.”