The most distant world ever explored 4 billion miles away finally has an official name: Arrokoth 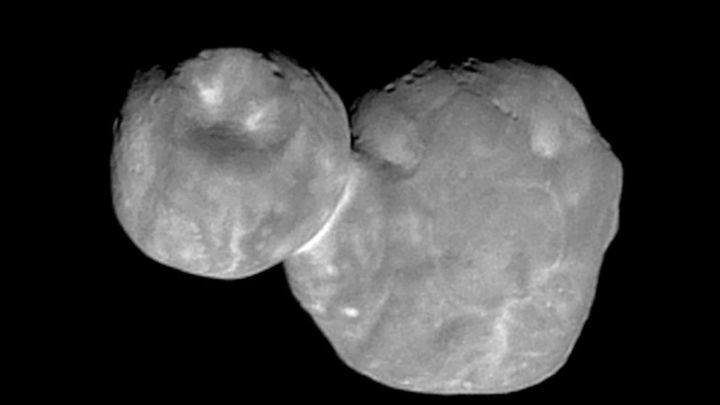 The most distant world ever explored 4 billion miles away finally has an official name: Arrokoth.

That means "sky" in the language of the Native American Powhatan people, NASA said Tuesday.

NASA's New Horizons spacecraft flew past the snowman-shaped Arrokoth on New Year's Day, 3 ½ years after exploring Pluto. At the time, this small icy world 1 billion miles (1.6 billion kilometers) beyond Pluto was nicknamed Ultima Thule given its vast distance from us.

"The name 'Arrokoth' reflects the inspiration of looking to the skies," lead scientist Alan Stern of Southwest Research Institute said in a statement, "and wondering about the stars and worlds beyond our own."

The name was picked because of the Powhatan's ties to the Chesapeake Bay region.

New Horizons is operated from Johns Hopkins University's Applied Physics Lab in Laurel, Maryland. The Hubble Space Telescope — which discovered Arrokoth in 2014 — has its science operations in Baltimore.

The New Horizons team got consent for the name from Powhatan Tribal elders and representatives, according to NASA. The International Astronomical Union and its Minor Planet Center approved the choice.

Arrokoth is among countless objects in the so-called Kuiper Belt, or vast Twilight Zone beyond the orbit of Neptune. New Horizons will observe some of these objects from afar as it makes its way deeper into space. 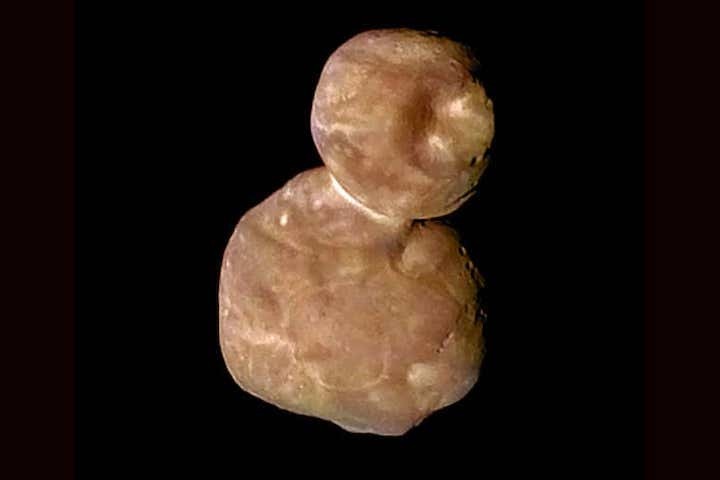 Goodbye Ultima Thule, hello Arrokoth. The space rock that NASA’s New Horizons probe sped past earlier this year has been given a new name: Arrokoth, which means “sky” in the Powhatan and Algonquian languages.

The rock’s official designation is 2014 MU69, but the New Horizons team nicknamed it Ultima Thule, a mythological reference to a distant and mysterious land. The nickname faced a significant backlash after a reporter at Newsweek pointed out that the Nazi party used the phrase to refer to the mythical homeland of the Aryan people.

On 12 November, NASA held a naming ceremony to give MU69 its new official name Arrokoth. The name was chosen based on the local Native American culture in Maryland, where the New Horizons mission control centre is based.

As New Horizons flew past Arrokoth, it took a wealth of data, which is still being sent back from the spacecraft to Earth for analysis. So far, we know that it has a strange shape like a pair of pancakes stuck together on the pan, which indicates that its two lobes merged in a relatively gentle collision. It also appears to be covered in methane or nitrogen ice, giving it a red tinge.

Objects like Arrokoth were the building blocks that made our solar system’s planets, so researchers hope that studying these frigid rocks could help us understand how planets form. 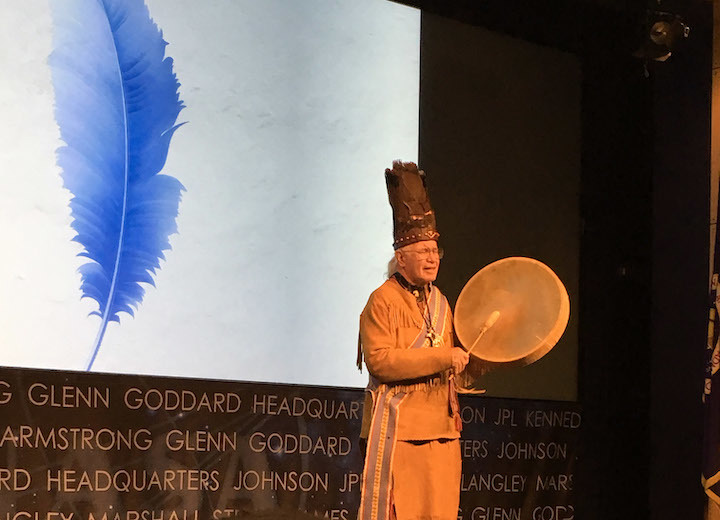 In a fitting tribute to the farthest flyby ever conducted by spacecraft, the Kuiper Belt object 2014 MU69 has been officially named Arrokoth, a Native American term meaning "sky" in the Powhatan/Algonquian language.

With consent from Powhatan Tribal elders and representatives, NASA's New Horizons team – whose spacecraft performed the record-breaking reconnaissance of Arrokoth four billion miles from Earth – proposed the name to the International Astronomical Union and Minor Planet Center, the international authority for naming Kuiper Belt objects. The name was announced at a ceremony today at NASA Headquarters in Washington.

"The name 'Arrokoth' reflects the inspiration of looking to the skies, and wondering about the stars and worlds beyond our own," said Alan Stern, New Horizons principal investigator from Southwest Research Institute, Boulder, Colorado. "That desire to learn is at the heart of the New Horizons mission, and we're honored to join with the Powhatan community and people of Maryland in this celebration of discovery."

New Horizons launched in January 2006; it then zipped past Jupiter for a gravity boost and scientific studies in February 2007, and conducted an historic first flight through the Pluto system on July 14, 2015. The spacecraft continued its unparalleled voyage on New Year's 2019 with the exploration of Arrokoth – which the team had nicknamed "Ultima Thule" – a billion miles beyond Pluto, and the farthest flyby ever conducted. 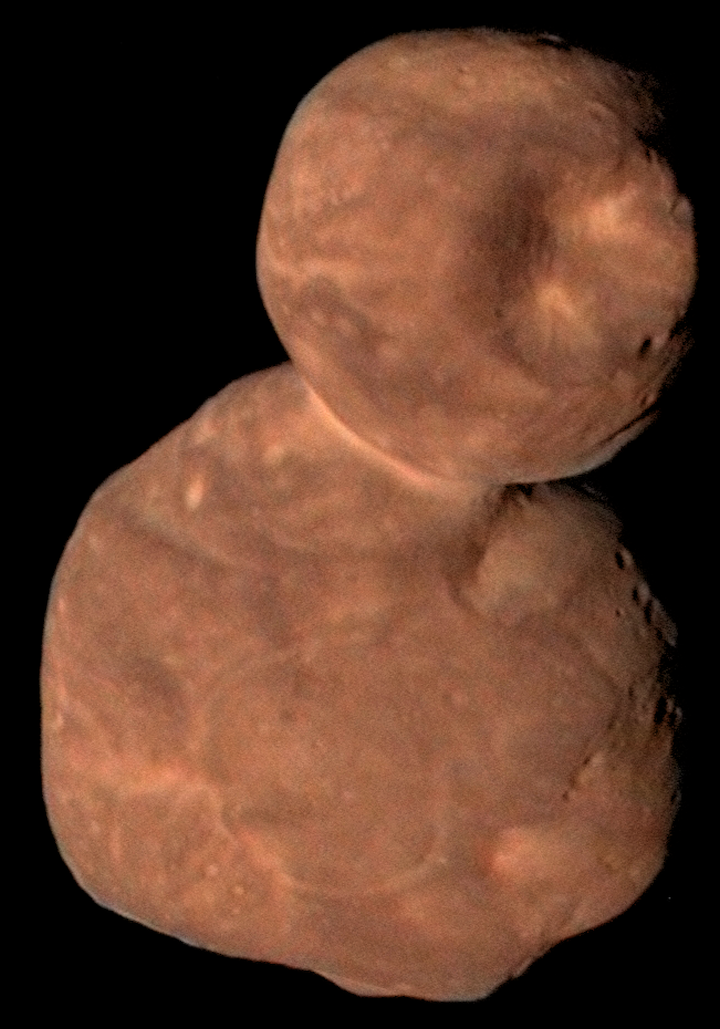 Arrokoth is one of the thousands of known small icy worlds in the Kuiper Belt, the vast "third zone" of the solar system beyond the inner terrestrial planets and the outer gas giant planets. It was discovered in 2014 by a New Horizons team – which included Marc Buie, of the Southwest Research Institute – using the powerful Hubble Space Telescope.

"Data from the newly-named Arrokoth, has given us clues about the formation of planets and our cosmic origins," said Buie. "We believe this ancient body, composed of two distinct lobes that merged into one entity, may harbor answers that contribute to our understanding of the origin of life on Earth."

In accordance with IAU naming conventions, the discovery team earned the privilege of selecting a permanent name for the celestial body. The team used this convention to associate the culture of the native peoples who lived in the region where the object was discovered; in this case, both the Hubble Space Telescope (at the Space Telescope Science Institute) and the New Horizons mission (at the Johns Hopkins Applied Physics Laboratory) are operated out of Maryland — a tie to the significance of the Chesapeake Bay region to the Powhatan people.

"We graciously accept this gift from the Powhatan people," said Lori Glaze, director of NASA's Planetary Science Division. "Bestowing the name Arrokoth signifies the strength and endurance of the indigenous Algonquian people of the Chesapeake region. Their heritage continues to be a guiding light for all who search for meaning and understanding of the origins of the universe and the celestial connection of humanity."

The Pamunkey Reservation in King William County, Virginia, is the oldest American Indian reservation in the U.S. -- formed by a treaty with England in the 1600s and finally receiving federal recognition in July 2015. The Pamunkey tribe and its village were significant in the original Powhatan Confederacy; today, Pamunkey tribal members work collaboratively with other Powhatan tribes in Virginia and also have descendants who are members of the Powhatan-Renape Nation in New Jersey. Many direct descendants still live on the Pamunkey reservation, while others have moved to Northern Virginia, Maryland, D.C., New York and New Jersey.