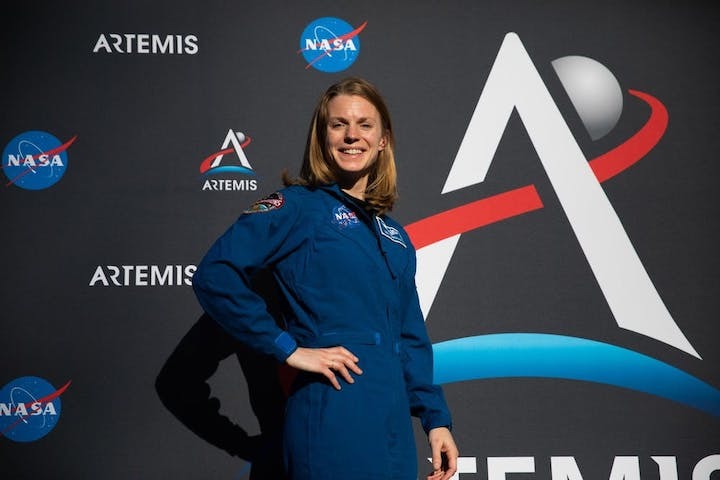 Zena Cardman, a UNC alumna and astronaut candidate with NASA's 2017 class, poses for a potrait in front of Morehead Planetarium on Wednesday, Nov. 6, 2019. Cardman entered the cohort as one of twelve from over 18,000 applicants.

One UNC alumna may soon have an out-of-this-world experience — literally.

Zena Cardman, who graduated with her master's in 2014, is a NASA astronaut candidate who has spent the past two years in training for potential space travel.

“I actually didn’t grow up always wanting to be an astronaut,” Cardman said. “I wanted to do all kinds of different things growing up — everything from a novelist to a seal trainer at a zoo. It wasn’t until college that I figured this would be a career path I wanted to take.”

Cardman graduated from UNC with a bachelor’s in biology and master’s in marine science. She was formally selected to be an astronaut candidate in 2017.

“My favorite moments were running into someone on the Quad or sitting in the Pit,” Cardman said. “You could sit there for an hour and your 50 favorite people happen to walk through. I miss that small world feeling of this campus. It was such a good time.”

She has returned to UNC this week as part of the University’s annual research week, where she plans to speak about NASA’s newest program — Artemis. The program plans to get the first woman and next man on the Moon by 2024.

Cardman was joined by NASA Deputy Administrator James Morhard, who said that as a part of Artemis, NASA is building the biggest rocket ever. The rocket will carry the Orion capsule, which will eventually take humans to the Moon. He said the exploration of Mars and beyond are also on the horizon.

“The Artemis program is really a confluence of science and human exploration,” Morhard said. "We have to do both. We wouldn’t know the challenges of the Earth had we not done human exploration. We’re going to meld those together more than we’ve ever had.”

Morhard said there are still many challenges ahead toward long-term sustainability, namely radiation and food.

“The Moon is a place where we’re going to prove out these technologies so we can eventually go further,” Morhard said. “The Moon may be a stepping stone or a jumping off point to go to many other different planets or moons in the future. Or, we may be jumping from one planet to the next, depending on what resources we find.”

Morhard said he hopes the Artemis program will be a noteworthy achievement for this generation.

“The first time we did it was flags and footprints," Morhard said. "This time is really the beginning of preparing and proving we can go into deep space.”

Following Cardman’s graduation next month from the astronaut training program, she will be assigned technical duties for the time being while she waits for a flight assignment.

She will be the fourth UNC graduate to become an official astronaut.

For decades, UNC has been a hub for scientific discovery. The Morehead Planetarium and Science Center was used by dozens of Apollo astronauts, including Neil Armstrong and Buzz Aldrin.

“It’s totally surreal,” Cardman said. “Some days are more surreal than others — like anytime I wear the space suit and I look down at my hands and I’m surprised that’s really me. Every day is a treat.”

In a field once dominated by males, Cardman said her experiences have included a multitude of women.

“I am very fortunate to work in an astronaut core with a lot of women, actually,” Cardman said. “I don’t even feel like I’m breaking barriers, personally, but I get to work with my heroes.”

Throughout the week, NASA representatives have been in the Student Union with informational tables on the work of NASA and the Artemis project. Many students said they are excited about the prospects of continued space exploration, especially by UNC alumni.

“It needs to be done,” first-year Lola Leveque, majoring in global studies, said. “I’d be really scared, but it is really cool to see where UNC students are able to go after graduation.”

Cardman said while her life now consists of things like studying Russian language and spacewalk training, her time at UNC was spent finding mentors and getting involved.

“Students are really an important part of research,” Cardman said. “It’s never too early to get started on research and be a part of space exploration.”

Morhard said careers at NASA are now not all about science and engineering.

“We need writers, marketing, business, accounting majors,” Morhand said. "There’s a lot of other majors that really matter for what we’re needing to do. It’s also about leadership. It’s about what your parents taught you — honesty, integrity, having a vision, having courage and being kind to people.”

Cardman, who holds a minor in creative writing, said you can be an astronaut with more than just a traditional background.

“My advice to any student is to just keep going,” Cardman said. “You never know where it’s going to take you.”