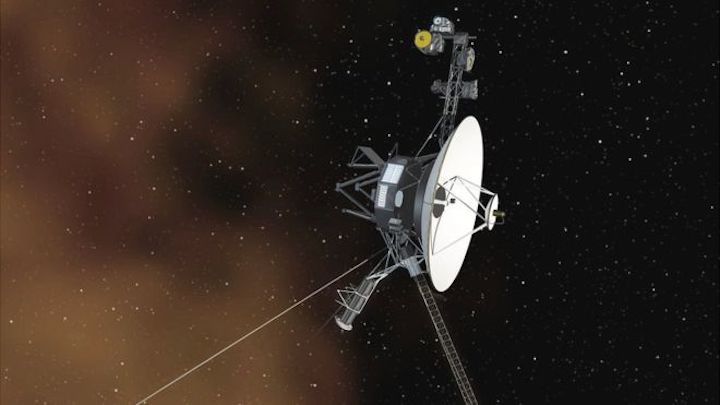 Data sent back by the two Voyager spacecraft have shed new light on the structure of the Solar System.

Forty-two years after they were launched, the spacecraft are still going strong and exploring the outer reaches of our cosmic neighbourhood.

By analysing data sent back by the probes, scientists have worked out the shape of the vast magnetic bubble that surrounds the Sun.

The two spacecraft are now more than 10 billion miles from Earth.

"We had no good quantitative idea how big this bubble is that the Sun creates around itself with its solar wind - ionised plasma that's speeding away from the Sun radially in all directions," said Ed Stone, the longstanding project scientist for the missions.

"We certainly didn't know that the spacecraft could live long enough to reach the edge and leave the bubble to enter interstellar space."

The plasma consists of charged particles and gas that permeate space on both sides of the magnetic bubble, known as the heliosphere.

This showed that the spacecraft were passing from an environment with hot, lower density plasma characteristic of the solar wind and entering a region with the cool, higher density plasma thought to be found in interstellar space.

The boundary between the two regions is known as the heliopause.

"We saw the plasma density at the heliopause jump by a very large amount - a factor of 20, at this rather sharp boundary out there," said Prof Don Gurnett, from the University of Iowa.

"Actually, with Voyager One we saw an even bigger jump."

The findings suggest that the heliosphere is symmetrical, at least at the two points that the Voyager spacecraft crossed. The researchers say these points are almost at the same distance from the Sun, indicating a spherical front to the bubble - "like a blunt bullet", according to Prof Gurnett.

The results also provide clues to the the thickness of the "heliosheath", the outer region of the magnetic bubble. This is the point where the solar wind piles up against the approaching wind of particles in interstellar space, which Prof Gurnett likens to the effect of a snow plow on a city street.

The heliosheath appears to vary in its thickness. This is based on data showing that Voyager 1 had to travel further than its twin to reach the heliopause, where the solar wind and the interstellar wind are in balance.

Some had thought Voyager 2 would make that crossing into interstellar space first, based on models of the magnetic bubble.

"In a historical sense, the old idea that the solar wind will just be gradually whittled away as you go further into interstellar space is simply not true," says Don Gurnett.

"We show with Voyager 2 - and previously with Voyager 1 - that there's a distinct boundary out there. It's just astonishing how fluids, including plasmas, form boundaries."

Voyager 2 sent back its first detailed data from interstellar space 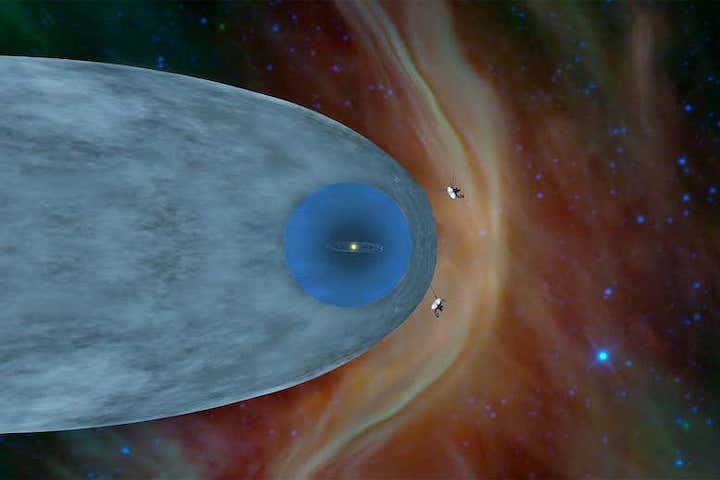 The probe also sent measurements from just beyond the heliopause. “Material from the solar bubble was leaking out into the galaxy at distances up to…170 million kilometres, and that was very different than what happened with Voyager 1, where barely any material was leaking out,” said Stamatios Krimigis at Johns Hopkins University in Maryland during a press conference. In fact, Voyager 1 actually saw material leaking into the galaxy from the interstellar medium.

One scientific instrument on Voyager 1 that measured the surrounding plasma – a form of matter in which a gas loses its electrons – was broken by the time the craft passed the heliopause, so Voyager 2 was able to look at some things that Voyager 1 could not. That included a layer inside the heliopause where the plasma seemed to pile up and get very dense, as well as a layer between the heliopause and interstellar space where the plasma from the two areas was mixed.

The heliopause remains largely mysterious despite the information from the Voyager missions: we don’t know its exact shape or structure, partially because both spacecraft left the solar system travelling in approximately the same direction. “Here’s an entire bubble that we’ve only crossed at two points,” said Krimigis. “Two examples are not enough.”

The spacecraft could still send back more data. Both are still functioning and taking measurements in interstellar space, but they will probably run out of power in the next five years or so. No further missions to interstellar space are currently planned. 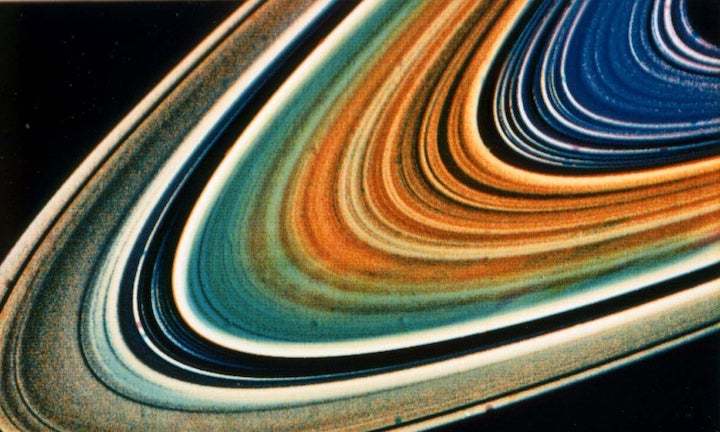 Voyager 2: the story of its mission so far – in pictures

Possible variations in chemical composition from one part of Saturn’s ring system to another are visible in this Voyager 2 picture. Photograph: Nasa
Created with page4