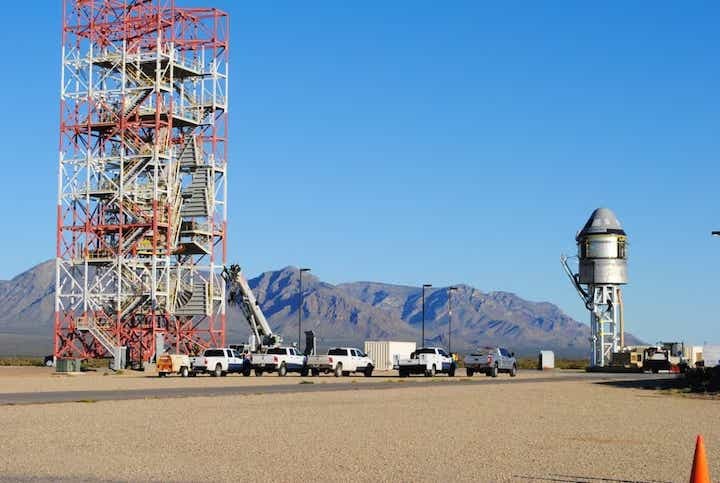 Boeing’s CST-100 Starliner spacecraft and its service module sit atop the test stand at White Sands Missile Range in New Mexico ahead of the company’s Pad Abort Test. The test is scheduled for Nov. 4, 2019, and will demonstrate the spacecraft’s ability to quickly escape the launch pad in the event of an emergency on launch day.
Boeing

t’s been five years since NASA awarded Boeing with a multi-million dollar contract to develop a spacecraft capable of flying astronauts to the International Space Station.

It was built entirely on the Space Coast in a former shuttle facility at Kennedy Space Center, with workers at one point going 24 hour a day, 7 days a week and it’s finally ready to debut.  It’s called Starliner and its first test flight is happening on Nov. 4.

“It’s a really exciting moment for the team but in parallel with that it’s a really serious test,” said Boeing Communication Manager Rebecca Regan.

On Monday morning Boeing will conduct a pad abort test of Starliner at White Sands Missile Base in White Sands, New Mexico. The main goal is to demonstrate Starliner’s ability to pull away quickly from the rocket in case of an emergency during launch.  It’s also a critical part of collecting data for crew flight certification.

The capsule, which has a familiar Apollo-era shape, will blast off from a test stand before soaring to 4,500 feet and fly a mile away from the launch site. The four launch abort engines will move Starliner down range with 160,000 pounds of thrust.

As the test pilot for next year’s first crewed Starliner flight, Ferguson will be on location to see how the capsule performs. His life could depend on it.

"This important test will show that we can bring a Starliner crew home in the unlikely event of a launch related emergency,” Ferguson said in an email to FLORIDA TODAY, “The successful Soyuz abort in October of 2018 reminded everyone how important this safety system really is.”

Ferguson is referring to an incident last year when a Russian Soyuz rocket carrying two astronauts aborted during launch due to a faulty sensor.

Since 2011 American astronauts have relied on the Russian rocket to get to the International Space Station but NASA’s Commercial Crew program is supposed to change that.

NASA selected Boeing and SpaceX to take over crewed flights to the ISS and the progress of both companies have been closely watched. It’s a private sector space race that’s been heating up over the past few months.

If you aren’t keeping score, here’s the play by play: SpaceX completed a pad abort test of its Dragon capsule in 2015 as well as the orbital flight test earlier this year. The Elon Musk-led company did suffer a major setback when the Dragon capsule exploded during a static test fire but they are rebuilding it based on what they learned from the test. That means only their in-flight abort test remains before they are ready for the crewed launch which could be as early as December.

As it stands, SpaceX is in the lead but if we learned anything from the World Series we know that the underdog can come from behind at the last minute.

The launch window begins at 9 a.m. Eastern. Viewers can watch the NASA TV livestream on floridaytoday.com. 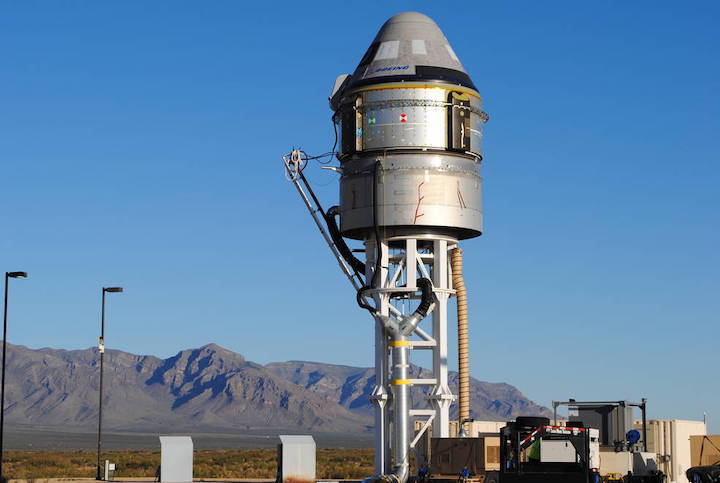 Boeing’s CST-100 Starliner spacecraft and its service module sit atop the test stand at White Sands Missile Range in New Mexico ahead of the company’s Pad Abort Test. The test is scheduled for Nov. 4, 2019, and will demonstrate the spacecraft’s ability to quickly escape the launch pad in the event of an emergency on launch day.
Credits: Boeing

The test is scheduled for 9 a.m. EST (7 a.m. MST) with a three-hour test window. Live coverage is targeted to start at 8:50 a.m., on NASA Television and the agency’s website. Coverage will be adjusted as necessary within the window.

Boeing’s Pad Abort Test is part of NASA’s Commercial Crew Program work with the American aerospace industry -- through a public-private partnership -- to launch astronauts on American rockets and spacecraft from American soil for the first time since 2011. The goal of the program is to provide safe, reliable and cost-effective transportation to and from the International Space Station, which would allow for additional research time and increase the opportunity for discovery aboard humanity’s testbed for exploration.

The test is designed to verify that each of Starliner’s systems will function not only separately, but in concert, to protect astronauts by carrying them safely away from the launch pad in the unlikely event of an emergency prior to liftoff. During the test, Starliner’s four launch abort engines and several orbital maneuvering and attitude control thrusters will fire, pushing the spacecraft approximately 1 mile above land and 1 mile north of the test stand.

The spacecraft’s crew module will use parachutes with landing airbags to touch down at White Sands Missile Range. It will be recovered and brought back to Launch Complex 32 for evaluation and analysis.