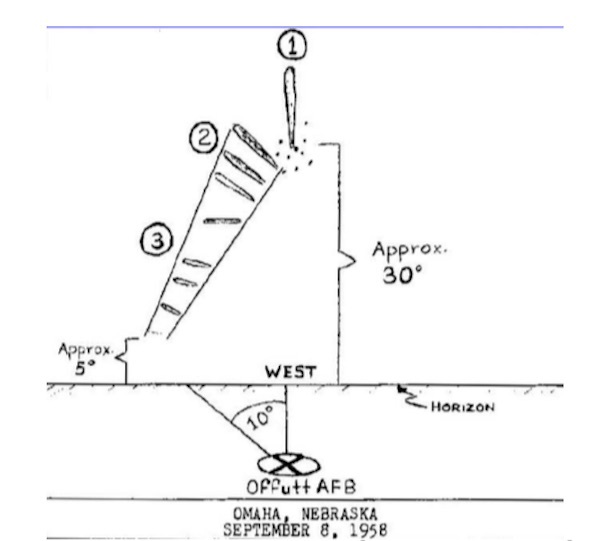 Section III gives us a long description made by Air Force Major Paul Duich. This report was apparently written over five years after the event based on the Major’s comments:

The time was approximately 1840. The date: 8 September 1958....As I crossed the open area, something caught my eye. Glancing up and to the west, I noticed what appeared to be a short vapor trail in an otherwise clear, blue sky. There were no clouds. The sun had just set. I continued walking but somehow that vapor trail didn’t register properly. I have seen thousands of vapor trails but this one was peculiar. I did a double take at that point for suddenly the short ‘vapor trail’ became a brilliant Source of light, much the same as a magnesium flare. I stopped dead in my tracks and watched.

The light was intense, but the “vapor trail” hung motionless. Even a short trail shows generation and dissipation as the aircraft moves across the sky. I watched for several minutes-- maybe 2 or 3--before I called to another officer: “Hey, what do you make of that?” pointing to the spot in the sky. He replied, “Looks like a short vapor trail.” I pointed out that it wasn’t moving or growing or diminishing in size. He stopped to gape and several others joined us.

By then, I decided this called for a better look. What we all agreed, rather quickly, was that the vapor was reflecting sunlight, the effect being similar to a sun-dog, even though the sun had already slipped below the horizon.

As the small crowd gathered, I hurried into the VOQ office and called the Offutt tower. I asked the tower operator to look west, about 30 degrees from the horizontal and tell me what he saw.

“Vapor trail my foot! Look at it now.”

I could see it through the window as I talked to the tower operator. The glow was now diminishing and changing to a dull red-orange and at the same time the fuzzy appearance gradually took on a solid look, in the distinct shape of a pencil or slender cigar. The upper end was blunter than the lower end.

By then all those in the office were curious and we all stepped outside to join the 10 or 20 others who had gathered to gape at the thing. All of a sudden we all started checking each others faces for some silly reason--for assurance of reality, perhaps, for as we watched there appeared at the lower end of the object a swarm of black specks cavorting every which way, much like a swarm of gnats. This procedure continued for a minute or so before they (the black specks) disappeared.

Then the object, which had hung motionless on the same spot, slowly changed attitude from an upright position to a 45 degree angle with the horizontal and started moving slowly toward the west. At the same time there was no drastic change in the coloring, but a per- ceptible color change did take place. It remained a dull orange-red color and continued its westerly movement.

We watched in awe for several minutes--perhaps 5-- and then the object changed attitude, again very gradually, until its longitudinal axis appeared parallel to the horizon. The westward movement continued, slightly to the southwest. The apparent size of the object diminished gradually and the color faded. About 5 minutes before we lost it completely (as it faded into the haze just above the horizon) the object changed attitude again, back toward the 45 degree position, but not quite.

As it continued on its westerly path, it maintained this last attitude until completely swallowed up by the haze. It never did drop below the horizon--just faded away. The fading, of course, was due to the many miles of hazy atmosphere between us and the object. The sky was cloudless, but the western horizon did have a slight haze, readily apparent against the bright background.

About 10 minutes after I sighted the object, a full colonel set up a tripod and 35 mm camera with color film and took several photographs of the object. He later denied getting any successful exposures after I asked him on several occasions.

Immediately after the object faded away, we asked one another what it was we saw. The popular answer was, “I don’t know, but I saw something.”2

Other sources of information

There were no other sources of information regarding this sighting. It is not in the Blue Book files even though the Major claimed to have made a report to ATIC over the phone. I doubt it was lost maliciously and it probably was lost for some other reason. Considering the fact that this story was recounted over five years later, one has to wonder about the accuracy of the details. Could the date have been September 7th or 9th? The witness stated that the sun had already set by 1840 local time. However, Sunset (us- ing CST) for Omaha did not occur before 1840 until after September 11. This could indicate the date was later than the 8th. Despite this inconsistency, for the purposes of this article, I have to assume the date is correct.

However, there are other sources of information that can suggest the possible solution. On the night of September 7, 1958, a high altitude research balloon was launched from Minneapolis, Minnesota. The purpose of the flight was to lift a gamma ray telescope into the upper atmosphere. Its travels were documented by several local newspapers.3,4,5 The telescope apparently was parachuted to the ground but the remains of the balloon seemed to have ended in northern Illinois.6 The track of the balloon initially went south and then went north. As it left the stratosphere, the surface winds took over and the balloon took a southeasterly track.

This was not the only balloon being launched in the area. Sioux city, Iowa launched two grab bag balloons on the 7th and 8th of September.7 While these balloons were only supposed to be aloft for a few hours, it seems that they did not always perform as expected and could stay aloft longer. One can assume the a balloon would take a similar track as the Minnesota balloon. Initially it would go south or southeast and then track backwards to the north or westward as the balloon reached the stratosphere. This could put it in the proximity of Omaha.

Research and Grab bag/ashcan balloons from Sioux city, Minneapolis, and Bismarck were being launched in the fall of 1958.8 There were also transosonde flights being launched from Japan.9 Some of which, crossed into the continental United States. There were quite a few sources of high altitude balloons in the region that could have produced this report if the date was not September 8.

There is also the possibility that this was just an unusual contrail. This seems unlikely considering the duration it existed but this is something that should be considered.

The description of the object appears to match that of a high altitude research balloon. It behaved like a balloon and was visible for a long period of time around sunset. A potential source of that balloon was launched only 90 miles to the north and it seems possible the balloon could have performed in a manner to end up west of Omaha. It is too bad that a timely investigation did not happen in 1958, where the details could have been accurately recorded. While this explanation is far from conclusive, one has to remember that the information was reported years after the event. We don’t know how accurate that information is. In any case, it seems unlikely that this was some form of advanced craft “not of this earth”. This is not “Best evidence” for UFOs and should be eliminated from the list.