The SOFIA airborne observatory has provided new infrared observations of a system that underwent a planetary-scale collision. The new data suggest that astronomers have much to learn about how such collisions proceed.

New observations from the Stratospheric Observatory for Infrared Astronomy (SOFIA) confirm earlier suspicions that dust around BD +20 307, a binary star system 300 light years from Earth, came from a recent collision between two large planetary-size bodies. The findings were published in the Astrophysical Journal. 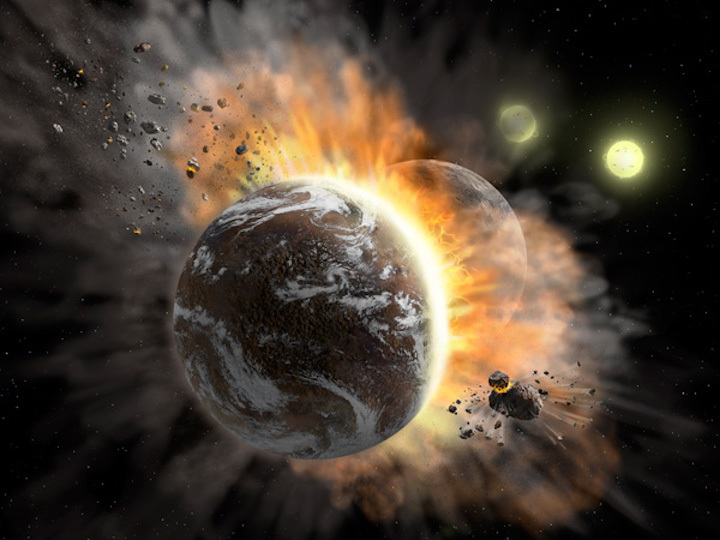 This artist’s concept illustrates a catastrophic collision between two planetary-size bodies in the binary system BD +20 307. Ten years ago, scientists speculated that the warm dust in this system was the result of such a collision. Such a collision could be similar to the type of catastrophic event that ultimately created our Moon. Now, SOFIA has found even more emission from warm dust, which could indicate that the dust is hotter (closer to the stars) or it could mean that there's more dust altogether.
NASA / SOFIA / Lynette Cook

The two stars of the BD +20 307 system are at least a billion years old, so any debris left over from their formation should have cooled down a long time ago. But ever since astronomers first imaged the system using infrared wavelengths 15 years ago, they’ve found dust that’s warmer than expected, suggesting a recent collision.

The first such observations were made in 2004 by the Keck and Gemini North telescopes on Manuakea, Hawai‘i, and they were soon confirmed by the Spitzer Space Telescope, which gathered infrared data as it trailed Earth on its path around the Sun. “Infrared light is particularly sensitive to warm dust,” says Alycia Weinberger (Carnegie Institution), who worked on the Spitzer data and is the principal investigator on the new project.

The most likely explanation for the presence of this unusually warm dust is that a collision happened tens of thousands of years ago between two large worlds within the system, an event which would have left behind a lot of warm dust and, probably, smaller fragments. If those fragments continue to collide with each other, the remains would grind into dust. This process, known as a collisional cascade, is likely to go on for thousands of years and to produce more dust, which is easily detectable in the infrared.

Now, scientists were able to collect new data with SOFIA, an infrared telescope that flies in our planet’s stratosphere aboard a modified Boeing 747. “Our recent SOFIA observations, taken about 10 years after Spitzer’s measurements, indicate that the brightness of the dust disk has increased by 10% in the last decade,” says Maggie Thompson (UC Santa Cruz), the lead author of the paper.

The reason for this recent increase is unclear, but the researchers proposed a few explanations. One possibility is that the dust became warmer as it drifted inward toward the binary stars, explains Weinberger. Or there might simply be more dust now than a decade ago.

Scientists are still not sure which of mechanism has brightened the system over the past decade. Ben Zuckerman (UCLA), who was not involved in the study, notes that “that the
details of the processes that occur inside of dusty debris disks can be quite complex and are not yet well understood.”

Researchers hope that further data will shed more light on the evolution of this system. “Our recent SOFIA observations that cover longer wavelengths will help us draw more concrete conclusions regarding the most likely cause of this dust brightness increase over such a short timescale,” Thompson says.

More importantly, understanding this binary star system might help us better understand our own Sun. As Christine Chen (STScI), who also wasn’t involved in the study, points out, the system is “undergoing violent collisions that could be similar to collisions that occurred in our own solar system during the final assembly of the terrestrial planets.”